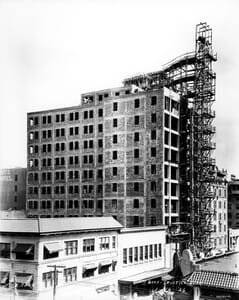 The featured photo is an aerial view of SE First Street in downtown Miami on January 16, 1926, from the vantage of SE First Avenue looking northeast. The edifice under construction is the Miami Bank & Trust Building which was completed in the Spring of 1926 and opened under the leadership of George Nolan, who took over as the president of the bank within a couple of years after its founding in 1921.

The financial institution operated out of this building through a series of acquisitions, first to City National Bank and Trust, and then later to Florida National Bank. The last acquisition led to the relocation of the bank to the Alfred I Dupont building on Flagler Street in 1939, which led to the renaming of the structure to the ‘Langford Building’ in October of that year. The edifice was historically designated on November 17, 1988, and operates as the Langford Hotel at 121 S.E. First Street today.

The structure on the northeast corner of SE First Avenue and SE First Street, to the left of the Miami Bank & Trust in the picture, is the Converse Building, which was constructed in 1924. The Converse still stands on the same corner today and is home to Churchill’s Barber Shop.

The building to the south of the Converse, or in the lower right portion of the photo, is a partial view of the Columbia Building. This structure was financed by Frederic Rand, who, during the building boom decade of the 1920s, had a vision of transforming NE Second Avenue into the Fifth Avenue of the South, modeling it after New York City’s famed thoroughfare. He purchased lots along NE Second Avenue from Flagler Street to NE Fourteenth Street in the hopes of lining the street with hotels, shops, and commercial buildings. 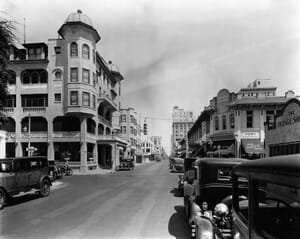 His signature building along the avenue was going to be the Roosevelt Hotel, named for Teddy Roosevelt. However, before the building was more than a skeleton, the crash of 1926 left the building partially constructed. It sat idle for a decade when it was acquired by Lindsey Hopkins who finished the building to be repurposed as a school. Five years later, the Dade County Public School system purchased the building and made it a technical high school. Rand was also the financier of the Huntington Building, which still stands on the southwest corner of SE Second Avenue and SE First Street.

The Columbia Building was constructed in 1924 and sat on the southeast corner of SE First Avenue and SE First Street. The L-Shaped structure was constructed around five Royal Palm Cottages that at one time fronted SE First Street but were moved to the rear of the property to make room for the Columbia. This building stood on that corner from 1924 until it was razed in 1982 and replaced by the Ultramont Mall, which still occupies the same corner today.