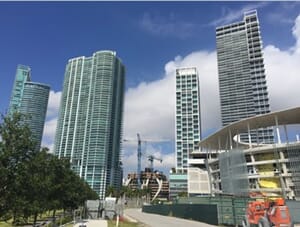 The Miami-Dade County Commission provided a life line by approving a $49 million bailout in early April of this year. The county had already secured $165 million for the museum prior to the bailout. The funds will come from county hotel taxes.

Although not part of Museum Park, the condominiums across the street from the park also continues to make progress. The 1000 Museum Condominium project suffered a major loss due to the sudden death of the architect, Zaha Hadid on March 31st, 2016. It was Hadid’s dream to see this project to completion. There is a large photo on the front of the building commemorating Hadid’s contribution and passion for the project.