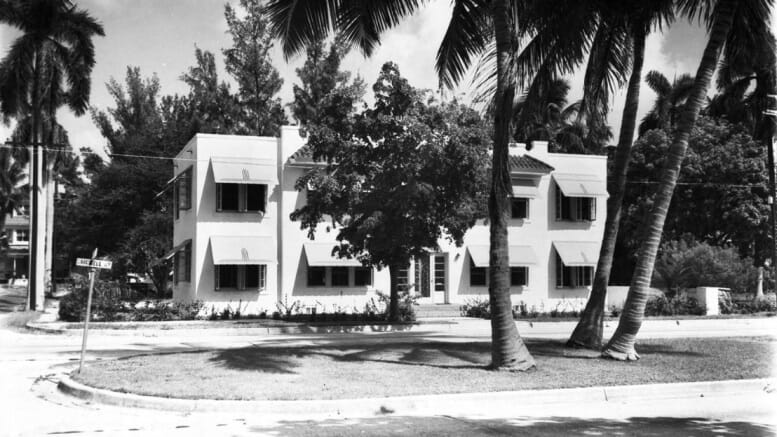 This is a photograph of the Morris Apartments at 1309 Brickell Avenue on August 24, 1948. The apartment building was constructed in 1921 and opened in January of 1922 as the Royal Apartments.
After the building was sold in 1924, the name was modified slightly to the Royal Palm Apartments. 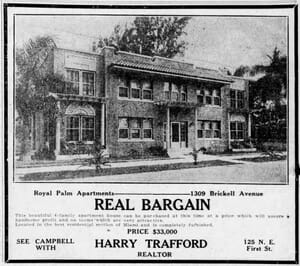 The residences in the building were advertised as large 4-room apartments, which were “very elaborately furnished.” Newspaper ads made a point to accentuate the proximity of the complex to Biscayne Bay which allowed residents to enjoy “a cool bay breeze”, and a short walk from home to downtown. When the complex opened in 1922, each of the apartments rented for $30 per month. Eleven years later, in 1933, the apartments rented for $60 per month under a lease agreement, or $70 on a monthly rental.

The apartment building was sold in the 1946-47 timeframe to Harry Morris who changed the name of the structure from the Royal Palm to the Morris Apartments. The rental complex operated as an apartment building until 1967 when it was converted into commercial office space for the Dodd Realty Corporation. The real estate firm conducted business out of the building until it was sold and vacated in 1981.

One of the most interesting tenants at the Morris Apartments was Roger Steadman who was living in one of the units in 1958 when he was arrested for “conspiracy to launch a military expedition against a friendly nation and conspiracy to export arms and ammunition unlawfully.” Steadman was a pilot who agreed to help a group of twenty-two Cuban rebel sympathizers fly weapons to Cuba. 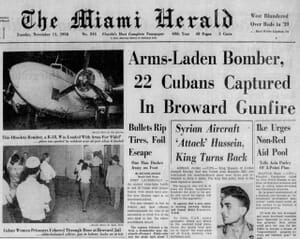 The group planned on flying an ancient B-18 bomber from Prospect Field in Fort Lauderdale to Cuba in order to deliver rifles, sub-machine guns, ammunition and field equipment. West Prospect Satellite Field was built in 1941 to train Naval Aviators during World War II. In 1947, the federal government deeded the property to the city of Fort Lauderdale for use as a public airport which is now known as Fort Lauderdale Executive Airport (FXE).

The rebel sympathizers drove ten automobiles onto the airfield and began unloading crates onto the plane when a homeowner near the airport reported suspicious activity to law enforcement. This led to an eventful capture which included machine gun fire and several car chases. At the end of the operation, there were twenty Cuban men, two Cuban women and one American Citizen, Roger Steadman, who were arrested on the evening of November 11, 1958.

Steadman admitted that the B-18 plane, which pre-dated World War II, would never have taken off because of the weight of the equipment. Each of the crates containing the weapons and ammunition loaded on the plane were marked with a single word: “Fidel”.