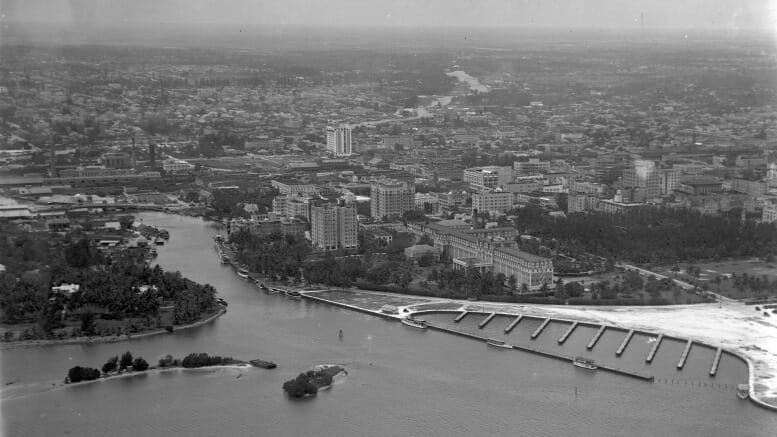 This featured photo provides a glimpse of the mouth of the Miami River in 1925. This was the same year that Bayfront Park was constructed from dredged land, and part of the newly developed park can be seen to the right of the river in the photo. Royal Palm Park was the first park in downtown Miami until Bayfront Park was completed in 1925. Royal Palm was built by the FEC Railway and remained privately owned. It can be seen above and to the right of the sandy yacht basin.

The year 1925 was the last full season that the Royal Palm Hotel was open for business. It was badly damaged during the 1926 Hurricane and never fully recovered. Part of the hotel was removed in 1928 when the Brickell Avenue Bridge was built over the river to connect to NE Second Avenue. The hotel was completely razed by 1930. Even after the hotel was razed, the FEC docks remained on the southern end of Bayfront Park for a few more years.

In the center of the photograph is Fort Dallas Park. It was a subdivision platted by Henry Tuttle shortly after his mother died in 1898. It served as a residential neighborhood with single family homes until the mid-1910s. By the 1920s, the Fort Dallas Park was a cluster of mid-rise apartments and hotels. Many of the buildings in this area remained standing until the 1970s.

In the foreground of the picture is a spoil island that was known as Burlingame Island. Mary Brickell offered to remove the land mass at her expense in the early 1910s, but Florida’s Internal Improvement Fund put it up for auction and the island was awarded to Mary Burlingame in 1916. The islet remained undeveloped until 1932 when it purchased and E.J. Reed in 1932 and expanded in the mid-1930s. The island was sold to Ed Claughton in 1943 which is why it is referred to as Brickell Key on Claughton Island today.

Lastly, to the north of the spoil island is Brickell Point. The point was still the location of several buildings built and owned by the Brickell family in 1925. Maude Brickell sold the property to the Elks Lodge in 1948 with the stipulation that she could live in the family home for the rest of her life. After her passing in 1961, the area was development and included the addition of the Brickell Point Apartments in 1951 along the river’s southern shore.

Overall, this aerial shot of the Miami River gives a great indication of its serpentine shape. It has become one of the busiest ports in the state of Florida and provides the City of Miami a very distinct artery of water as its centerpiece.