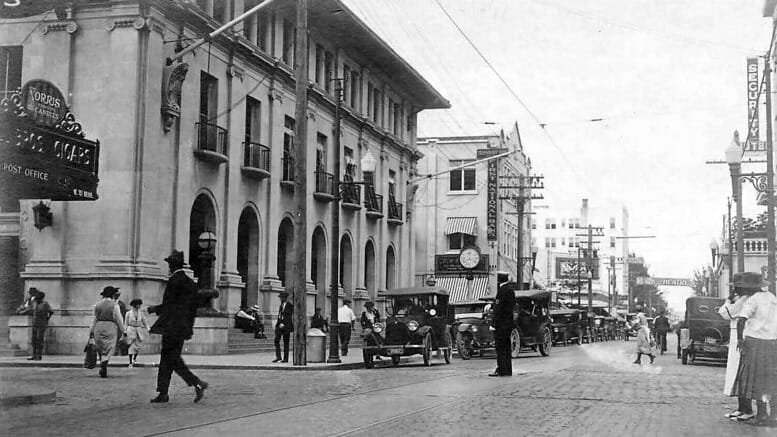 The building on the northwest corner, or to the left of the photographer, is Miami’s original Federal Courthouse. The building was constructed in 1912 and was designed by architect Oscar Wenderoth. It was expanded in 1914 and then again in 1918 and was also the home to Miami’s downtown U.S. Post Office. The Federal Courthouse and Post Office moved a couple of blocks north in the 1930s, leaving the building in the picture to become the first Savings and Loan in the country in 1937. The edifice still stands today and there were plans for it to become the Biscayne Bay Brewing Company’s downtown location prior to the Covid-19 pandemic. 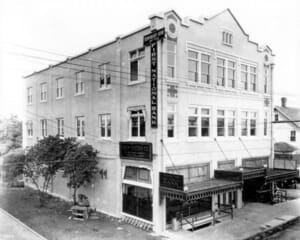 The structure to the north of the Federal Courthouse, on the same side of the street, is the Clayton Building at 128 NE First Avenue. The edifice opened in August of 1921 as the office of the real estate firm of Crow & Reeder. In addition, it also became the temporary home of the First National Bank when they replaced their original building on the corner of NE First Avenue and Flagler Street with a new ten-story edifice, which opened on November 14, 1922. The ten-story structure still stands on that corner as the First Flagler Condominiums.

Directly across the street from the Clayton Building one can see the marquee for the Security Hotel. The establishment began as the McKinnon Hotel when it opened in January of 1920. However, when the proprietors sold the hotel to the Dade County Security Corporation in October of 1921, the establishment was renamed the Security Hotel and the marquee was added to the exterior of the building. The hotel building was razed in 1925 to make room for a 16-story commercial office building that was named the “Security Building”. This building still stands and was leased by We Work until recently. 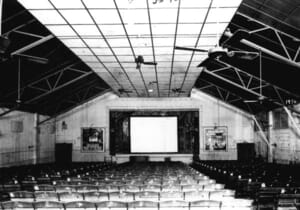 Off into the distance, there is a banner that spans NE First Avenue and reads “Theater”. This sign was to promote the Park Theater, which was built in 1919 as the Mank Theater located at 202 NE First Avenue. The showplace was home to live theater and was considered one of the nicest and largest theaters in Miami during the 1920s. The theater was designed by architect George Fink and could accommodate up to 1500 theatergoers.

When the Fink Theater opened on July 3, 1919, the by-line in the Miami Herald read: “New Playhouse Will Present the Broadway Follies”. When Edna Park became a fan favorite and regular performer at the venue in 1921, the establishment was renamed to the Park Theater as a way to highlight her involvement with the playhouse.

An article published in the Miami Herald on the day of the theater’s opening described it as follows:

“The new Mank theater was built for the comfort and pleasure of the public, being constructed to keep you cool in the summer and comfortable in the winter. It is on a circuit playing the very best of big productions.”

Later, the Dixie and then the Rio theater would reside near the location of the Park Theater at 222 NE First Avenue. The Rio Theater was operated by Wometco until they shut down the operation in October of 1980. The Rio was the last of the central business district cinemas to close its doors from the hey day when there were as many of ten theaters operating in downtown Miami during the middle decades of the twentieth century.

Special Thanks for Larry Wiggins for helping research the date of this photo!