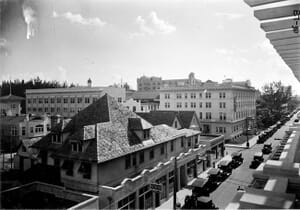 The photograph of Northeast First Street in 1924 provides a glimpse of Miami during the building boom of the 1920s. The picture was taken from the top floor of the Leamington Hotel, which still stands on the corner of NE First Street and NE Third Avenue, then still referred to as ‘Short Street’ in the mid-1920s. One can see portions of the hotel in the photo to the right.

The image captures how lively and busy downtown was during 1924. At the time this photo was taken, Miami was still a year away from the peak of the building boom of the 1920s. However, NE First Street was lined with real estate offices at the time. The building in the foreground, on the left side of the picture, was one that contained several real estate offices such as Palmer-Laramore, Gresham MFG and SOU Investment Company. The Stewart and Brundage Barbers was one of the few non-real estate related businesses in the building. However, one can imagine that it benefitted greatly from all the activity generated from the real-estate related activity in the area. 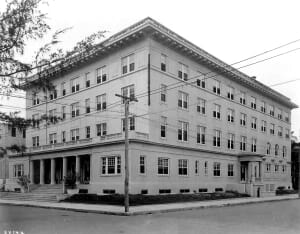 Directly to the west of the office building was the downtown YMCA which resided on the southwest corner of NE First and Short Streets. The YMCA opened in 1918 and was a popular downtown venue for recreation in 1924. It was a fixture on the corner until its demolition in October of 1978.

West of the YMCA were more real estate offices, professional buildings and a few homes. Short Street was primarily a residential neighborhood until the mid-1910s. The area changed to more of an apartment, hotel and commercial district from that time-period onward.

To the left of the YMCA was a small apartment building and then the larger Fairfax Court Apartments. The Fairfax Court opened on December 1, 1919 and spanned from the middle of the west side of NE Third Avenue to Flagler Street. It was built by the Ralston Brothers, who also built the Ralston Building, which was the tallest building in Miami for a few months in 1917 until it was eclipsed by the McAllister Hotel later the same year. The Ralston Building still stands on the southwest corner of NE First Street and NE First Avenue.

The brothers also built the Calumet Building which resided on Flagler Street just west of the Fairfax Apartments. Although not seen in this picture, the Calumet Building faced Royal Palm Park and was an important edifice in Miami during the 1920s. It opened in 1923 and was an important part of the Flagler streetscape for more than seven decades. It was the location of local favorites such as the Town Theater and Sloppy Joe’s Restaurant, among many other fine establishments.

Also seen in the distance is the steeple of the First Presbyterian Church and the top portion of the Ponce De Leon Hotel on Flagler Street. First Presbyterian resided on the edge of Royal Palm Park, on the corner of today’s SE Third Avenue and Flagler Street. The church was built with land and money donated by Henry Flagler. The congregation moved to Brickell Avenue in the late-1940s. 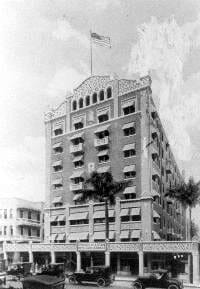 At the time the picture was taken, the Ponce De Leon was open for less than a year. It was completed in 1924 and was probably best known for being the hotel where Al Capone stayed when he first arrived in Miami in December of 1927. Just like the Calumet Building, the Ponce De Leon was a fixture on Flagler Street until the late-1970s.

While many of the buildings in the photograph are not part of the cityscape today, the photograph captures a splice of time to help us imagine what it would have been like to experience Miami nearly a hundred years ago. It is good to have pictures like these to remind us of a bygone era.