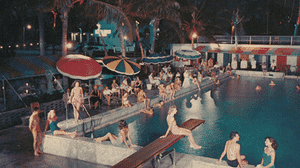 The featured photo is a post card of the Ocean Ranch Hotel pool in the 1960s. The pool was part of an annex to the original hotel which can be seen in the background behind the neon sign displaying the name of the hotel.

The hotel was a mansion built in 1917 and converted to the Ocean Ranch Hotel main building in the mid-1940s. The annex was built a few years later directly south of the main building on the south side of Southeast Twelfth Street.

The hotel featured a lot of events for their guests including water and fashion shows. The events took place at the pool. The pool was located on the water front and had a great a view of Biscayne Bay. 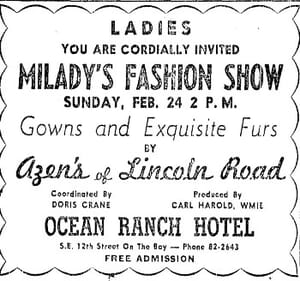 Unfortunately, the hotel was razed in 1970. While both the former mansion and annex are gone, the memory of the Ocean Ranch Hotel has been preserved in post cards and photos.