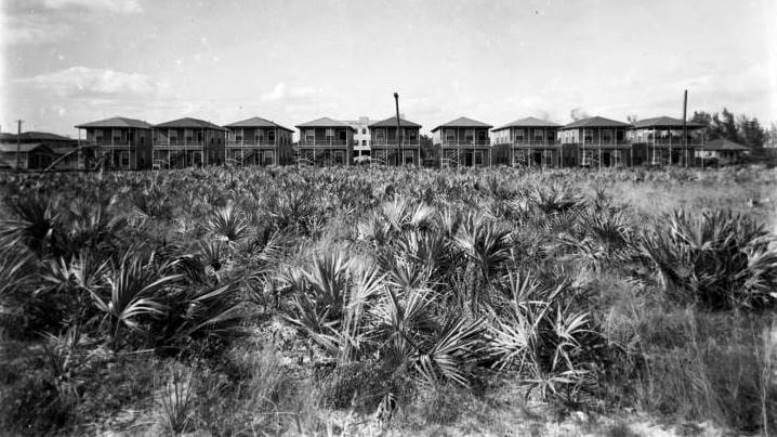 The featured photograph is of a row of duplex residences in Overtown on December 31, 1935. The residences were built shortly before this photograph was taken and were located on NW First Place between NW Nineteenth and Twentieth streets near the northern border of the neighborhood. At the time of photograph, which was taken from a distance in a grassy field looking east, the residences were recently completed.

The 1935 city directory, typically published and made available at the beginning of a given year, did not list any addresses on NW First Place along the 1900 block. However, the 1936 directory listed sixteen residents, and two vacancies, within this duplex community. Given that there was a total of nine duplexes, able to accommodate eighteen families, one can surmise that the residential complex was constructed and completed in 1935. 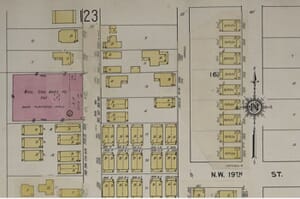 Figure 1: Sanborn Map from 1938. Area in pink was Miami Post Publishing and Duplexes on right

The boundaries of the area referred to as the “Central Negro District” in 1935 went from the FEC railroad tracks on the east, NW Seventh Avenue on the west, NW Fifth Street to the south and NW Twentieth Street to the north. According to Marvin Dunn in his book “Black Miami in the Twentieth Century”, the name of the district was changed in 1937 to ‘Washington Heights’. However, black people most often referred to the neighborhood as ‘Overtown’.

In his book, Dunn describes how the name originated:

According to Ann Marie Adker, who lived in the area all her life, it may have been because one had to go ‘over’ downtown to get to Colored Town from Coconut Grove. “Years ago, when you would see people catching the jitney, like from Coconut Grove up here, they would say, I’m going over town.”

The duplex residences featured in the photograph were located at the northern quarter of ‘Overtown’. The grassy field indicates that, while the core of the neighborhood, located south of the area in the picture, was struggling with overcrowding by the mid-1930s, parts of the northern portion of Overtown was still undeveloped in 1935.

In the middle of the photograph, beyond the row of duplexes, is a concrete commercial building that served as the home of the Miami Post Publishing Company. The building was located one block east of NW First Place with an address of 1948 NW First Court. The edifice sat on the east side of the court fronting westward.

The company was a white-owned business formed in 1921-22 by E.E. Westman for the purpose of publishing a weekly newspaper called the ‘Miami Post’, principally containing legal notices and advertising. The firm expanded its services into commercial printing which included magazines, hotel brochures and booklets, as well as labels for cans, boxes and crates, etc.

The Miami Post did a lot of work for the City of Miami. The company was awarded a contract in 1936 to print 450,000 publicity booklets to help promote the city. They were also the publisher of a book featuring the work of architects Richard Kiehnel and John Elliott called “A Monograph of the Florida Work of Kiehnel & Elliott”. The architectural firm was responsible for the designs of some of Miami’s most iconic buildings and residences during the 1920s and beyond. The Miami Post also earned the top “Awards of Excellence” in three major categories of fine lithography and letterpress printing by the Florida Graphic Arts Congress in 1962. 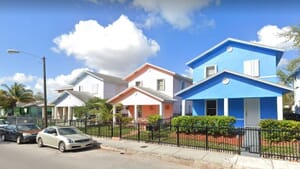 The publisher conducted business from its Overtown facility from its founding in the early 1920s into the 1970s. The original building was leveled during the 1926 hurricane but was rebuilt into the three-story structure seen in the featured photograph. The company later expanded to a second building, on the same block, during its peak years in the 1940s. An article in the Miami News, dated December 5, 1943, wrote: “the Miami Post Publishing Company has continued to expand to become one of the state’s largest plants.” As it approached its fiftieth year in business, the company closed its doors in 1971. The company was officially dissolved by proclamation on October 21, 1974.

What happened to the buildings seen in the featured photo?

The duplex complex that was built in 1935 was replaced with newer housing stock in the 2010s as seen in Figure 3. The former location of the Miami Post Publishing Company, formerly at 1948 NW First Court, is now a vacant lot.