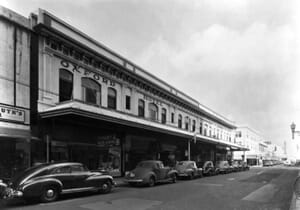 The featured photo is of the Oxford Hotel in the Ullendorff Building on February 24, 1946. The hotel was located on second floor and began operating in the fall of 1917. The first level of the two-story building was leased as retail space for restaurants, bakeries and several other commercial entities.

The building was constructed in 1915 on the west side of Avenue D. The street was renamed to North Miami Avenue as part of the Chaille addressing grid system, which was implemented in 1921. The rooming house’s address changed from 1004 Avenue D to 140 North Miami Avenue in 1920 during the implementation of the new address scheme.

The west side of the street was referred to as the Ullendorff block given that Phillip Ullendorff owned the lots along this side of the avenue. He was a Miami pioneer who arrived at Miami in 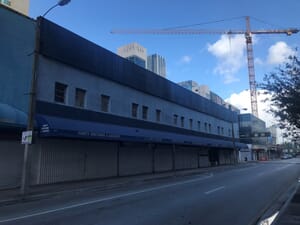 1896 as a butcher and real estate investor. He was co-founder of Nichols-Ullendorff Realty Company and was a director of the South Okeechobee Farms Company of Miami.

The Oxford Hotel operated on the second story of the Ullendorff Building until the Southern Bell Telephone Company signed a lease to replace the hotel with office space in March of 1952. While the hotel has been gone for more than sixty-five years, the building in which it resided still stands on North Miami Avenue (see Figure 1).