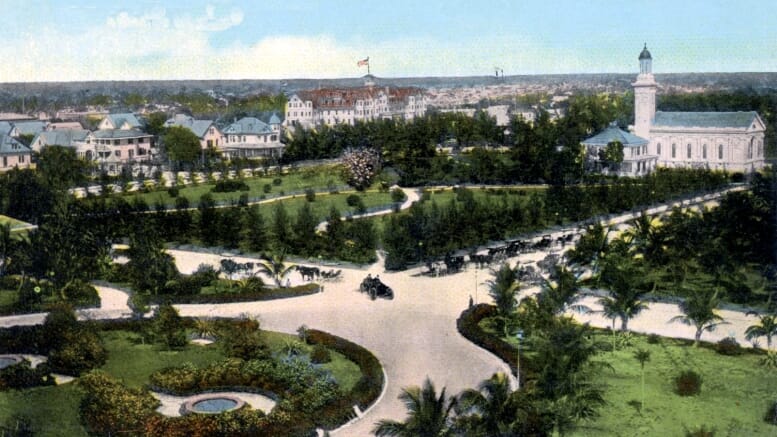 View from the Royal Palm Hotel observation deck (top of the hotel), looking northwest in 1907. In the foreground of the picture is the circular entrance via Royal Palm Way (today’s SE Third Avenue), to Flagler’s iconic hotel. Royal Palm Way traversed Royal Palm Park from today’s Flagler Street, then known as Twelfth Street, to the doorstep of the hotel.

The park was provided by the Flagler organization to provide green space and a venue for community activities such as baseball games, concerts, and sermons by William Jennings Bryan. Royal Palm Park was the city’s front yard until Bayfront Park was created from bay bottom in 1924.

To the north of the circular driveway is Royal Palm Park, with the First Presbyterian Church on the corner of today’s Flagler Street and SE Third Avenue. The church was constructed on land and by funds provided by Henry Flagler and opened in 1898.

To the west of the church is the Halcyon Hall Hotel, which opened in 1906, and to the south of the hotel are some of the more elaborate Royal Palm Cottages along today’s SE Second Avenue in downtown Miami. Some of the notable early pioneers who owned these residences included Joseph A. McDonald, Flagler’s superintendent who oversaw the construction of the Royal Palm Hotel, John B. Reilly, the first Mayor of Miami, and John W. Watson, who Watson Island is named.