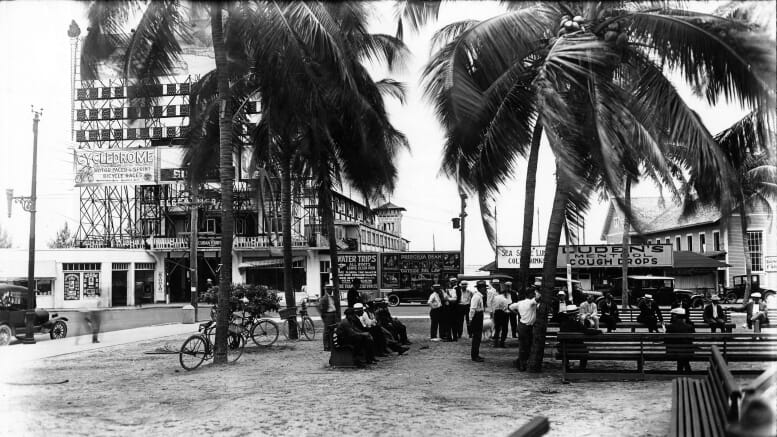 Royal Palm Park represented many things for Miami residents in the first couple of decades of the twentieth century. In this photo, taken in approximately 1920, people are relaxing on park benches located in the northeast corner of the park. The park was constructed by the FEC organization just north of the company’s Royal Palm Hotel and it served as Miami’s front yard for more than two decades before Bayfront Park was even an idea. It was Miami’s first athletic and event venue, it regularly hosted hundreds of people attending Sunday service conducted by William Jennings Bryan, and acted as a gathering spot for local residents and tourists.

The perimeter of the park was very inviting to those who wanted to relax and take in the breeze from Biscayne Bay. As seen in this photograph, the wind was somewhat shielded by the FEC Fair Building and Elser Pier. The large building at the end of Flagler Street (left side of the photo), was Elser Pier, a structure that was built in 1917 and stood until 1924, when it was razed to make room for Bayfront Park. The big electric sign in front of the pier was added in November of 1920, shortly before this photograph was taken.

The building on the right side of the photograph was the FEC Fair Building which was originally constructed to host the county fair but was later used for early conventions and other city events. Elser Pier became the marquee event venue when it opened in 1917. 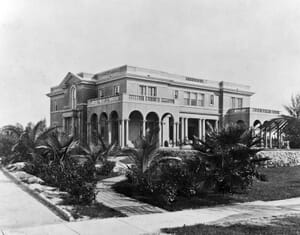 To the left of the Fair Building in this picture is an advertisement for Luden’s Menthol Cough Drops. It was a popular product in the early part of twentieth century and made its founder, William H. Luden, very wealthy. Luden was fond of Miami and visited annually during the winter season. He enjoyed his time in the Magic City so much that he purchased a home in the Point View subdivision of Brickell in February of 1920 from Locke T. Highleyman, who was the proprietor of Elser Pier during its short life in Miami.

Royal Palm Park was active and hosted a lot of events from 1896 until the mid-1920s. In the early 1920s, the city decided it was time to construct and operate a publicly funded recreational area, which led to the creation of Bayfront Park, and eliminated the need for the privately-owned Royal Palm Park. The hurricane of 1926 represented the beginning of the end for both the Royal Palm Hotel and its companion park.