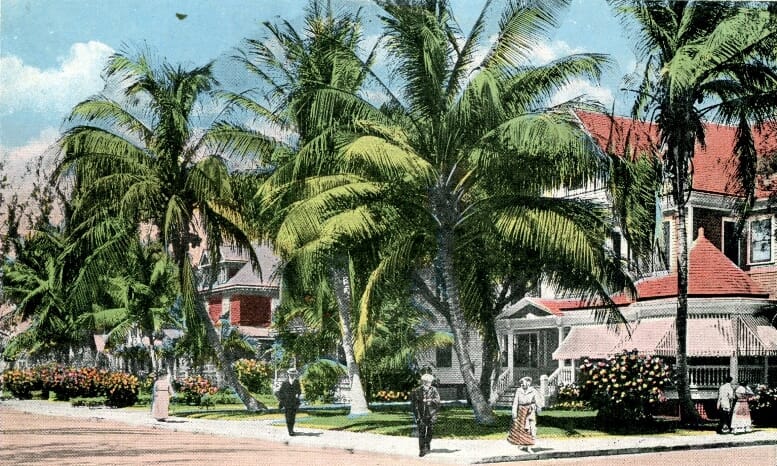 Cover: Postcard of Avenue B in Early 1900s

There was a time, early in the city’s history, when downtown Miami consisted of several upscale residential areas. This postcard highlights one of those quarters along Avenue B, or today’s SE Second Avenue, near where Henry Flagler constructed his flagship Royal Palm Hotel. The photograph from which the postcard was based highlights the essence of downtown Miami in the early 1900s.

As part of his commitment to help with the housing shortage in the new city, Flagler agreed to construct a two-block residential section of Royal Palm Cottages which became the home to many of the FEC’s top executives and many notable pioneers. A lot of the cottages erected by the FEC organization were modest A-frame structures that were built to accommodate single and multi-family lodging. However, some of the residences were quite extravagant as they were crafted in the Queen Anne style of architecture, which was popular during this timeframe.

The postcard features a perspective of Avenue B looking south from Thirteenth Street to Fourteenth Street. Today, based on the street naming system implemented in 1921, the same perspective is SE Second Avenue from SE First Street to SE Second Street. The home on the corner of Avenue B and Thirteenth Street, at 1300 Avenue B, was said to be the only cottage constructed by the FEC organization in this residential subdivision that was not painted Flagler Yellow. 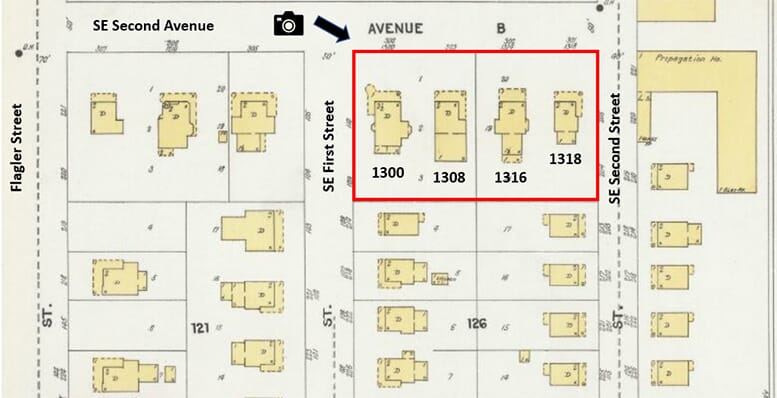 The first owner of this residence was J.W. Johnson, a prominent merchant from Key West, who relocated to Miami around the time of incorporation. Johnson and his family lived in the corner home at 1300 Avenue B until 1904, when they sold the property to William Brown, who in turn leased the property to Minnie March for the creation of the first March Villa, a popular rooming house in early Miami.

The house directly south of the Johnson home, at 1308 Avenue B, was the residence of J.A. McDonald, who was Flagler’s top officer responsible for overseeing the FEC’s obligation to help build the young City of Miami. McDonald was the FEC’s senior executive in town and directed much of what went on during the early years of Miami. Although McDonald owned the property, he didn’t always occupy the residence. From 1905 to 1908, he leased the home to Minnie March who converted it into a second rooming house to expand the capacity of the demand for accommodations at March Villa.

The home to the south of McDonald’s house, at 1316 Avenue B, was the residence of John B. Reilly, who was the first mayor of Miami and son-in-law of J.A. McDonald. Although difficult to see in the postcard, the last house, on the corner of Avenue B and Fourteenth Street, at 1318 Avenue B, was the residence of John W. Watson, who was a two-term mayor of Miami and state senator. Watson was also a pioneer lumber and hardware merchant, operating his business two blocks west of his residence on the corner of today’s South Miami Avenue and SE Second Street.

The postcard does a great job of capturing the elegance and tranquil nature of the downtown neighborhood. These homes were located directly across the street from the western edge of Royal Palm Park providing a front row seat to all the activities and events that took place at what was Miami’s most active venue at the time. However, the neighborhood changed dramatically during the building boom of the 1920s. The residential subdivision slowly disappeared as the quarter evolved to an urban commercial district.

The lot which hosted the Johnson residence, on the corner of SE Second Avenue and SE First Street, became the location of the Huntington Building which was constructed in the mid-1920s and still stands on that corner today. The lots which hosted the McDonald, Reilly, and Watson residences are now the location of the Chase Bank Building at 150 SE Second Avenue.