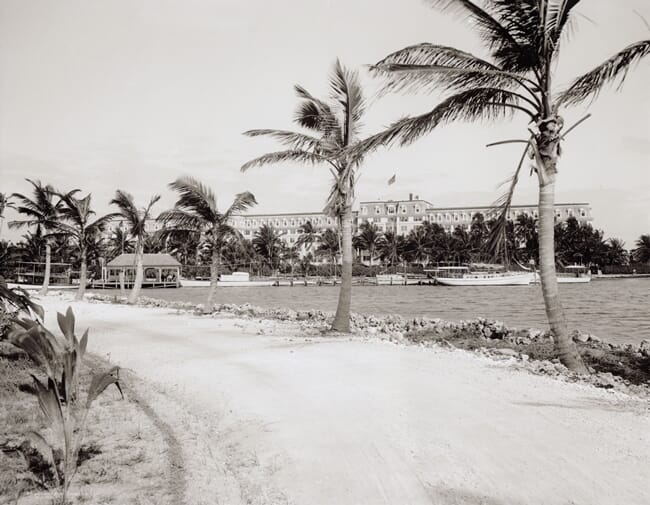 The yacht basin was part of a series of docks that were loosely considered the first port of Miami. The docks closer to Avenue D (Miami Avenue), were called the City or Terminal docks and handled commercial and passenger service, while the docks in the picture served private vessels of visitors who stayed at Flagler’s Royal Palm Hotel.

The back of the Royal Palm Hotel featured the Royal Palm gardens. The gardens were originally landscaped by Henry Coppinger Senior. The Coppinger family later started an Indian Village located near Sewell Park on the Miami River.

The reason that the gardens were created was that Julia Tuttle insisted that Henry Flagler not block her view of Biscayne Bay when he built the Royal Palm Hotel. Therefore, the Royal Palm was located off the water from the north bank of the Miami River by a good margin. The hotel was built in downtown where the Whole Foods is located today. Tuttle’s home stood at where the Hyatt is located today.

The hotel opened in 1897 and was the biggest attraction in Miami for the first couple of decades after the incorporation of the city. However, it fell out of favor by the second decade of the 1900s. It was damaged badly during the 1926 hurricane. The damage led to the demolition of the building which began in 1928 and was pretty much complete by 1930.

The area of Brickell Point where the photograph was taken is now part of a park commemorating the discovery of the Miami Circle. The circle was a set of post holes providing evidence of a ceremonial structure for the Tequesta Indians dating back more than two thousand years. The discovery was made in the late 1990s. While the park was originally created to preserve an important archaeological site and to honor the Tequestas, it is largely known by Brickell residents as “the dog park”.