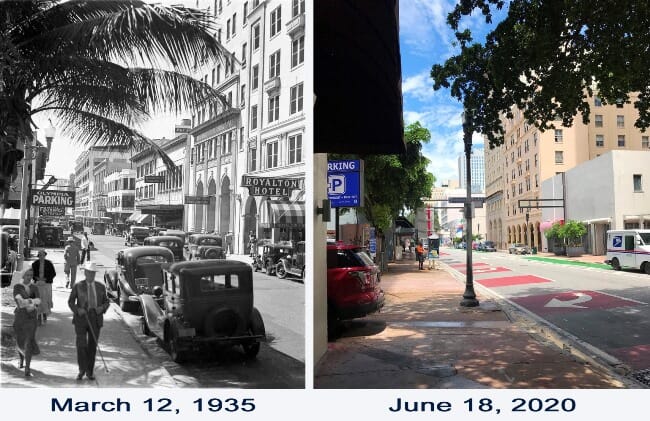 A street once lined with Henry Flagler’s Royal Palm Cottages quickly changed at the onset of the 1920s. The developers of that era saw SE First Street, formerly Thirteenth Street, as the next important commercial district in the growing downtown district. Property owners and developers saw the opportunity to add hotels, office and retail space as part of the transformation of this street.

The featured photo provides a look at SE First Street, in a westward direction, on March 12, 1935. The transformation of the thoroughfare took place a decade prior to the date of this photograph, but it provides a great look at the completion of the metamorphosis of this street fifteen years after it was conceived as a commercial hub. 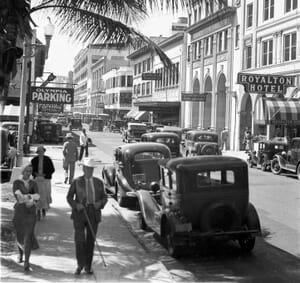 Across the street from the photographer’s vantage is the Royalton Hotel. It was designed by architect George Pfeiffer and built in 1923. The hotel opened in November of the same year. It is still standing at 131 SE First Street and now operates as Carrfour, which is an affordable housing community.

Directly west of the Royalton, is the Langford Building. It was built by George Nolan when he was president of the Miami National Bank and was designed by Martin Luther Hampton of Hampton & Ehmann. At the time of this photo, the building was occupied by Florida National Bank, which purchased the company that purchased Miami National Bank in 1931. Florida National moved out of this building in 1937 and into the Alfred I Dupont building, shortly after it was completed.

On the northeast corner of SE First Avenue and SE First Street is the Converse Building. It was designed by architect E.A. Nolan and built by A.C. Converse. The building provides retail space on the ground floor and office space on the second and third floors. The first level also hosted a couple of restaurants, including a Royal Castle from the early 1950s until the 1970s. The building still stands, and it is the location of Churchill’s Barber Shop today.

On the northwest corner of the same interscation was the Paramount Hotel and Theater. The building was designed by George Pfeiffer and constructed in 1916. The structure was originally leased to William Ogden, the mercurial owner of the Ye Wee Tappie Tavern and Tee House Plantation, but the contract was later acquired by Paramount Pictures and became the location of the first of several theaters in downtown Miami operated by motion picture company. Some other examples include the Olympia Theater, which opened in 1926, and the Fair Theater, which opened a couple of years earlier. 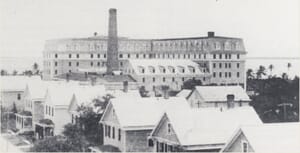 On the southern side of SE First Street closest to the photographer, one can see a parking lot designated for the Olympia Theater. Beyond the parking lot, to the west, was a shopping arcade built by Frederic Rand, the attorney who built the Huntington Building at the southeast corner of SE Second Avenue and SE First Street, just behind the vantage of the photographer. Rand’s structure was called the Columbia Building, which was designed by George Fink in 1920. It was an L-Shape building that ran along both SE First Street and SE First Avenue, extending south to SE Second Street. The structure was standing as late as 1980 but was razed to make room for a parking lot. Today, it is the location of the Ultramont Mall.

In addition to the view of Miami buildings from the mid-1930s, the featured photograph provides a glimpse of the people and automobiles of this era. While it feels like summer in March in Miami at times, it must have been a cool afternoon when this picture was taken given the body language and dress of those seen in the photograph.