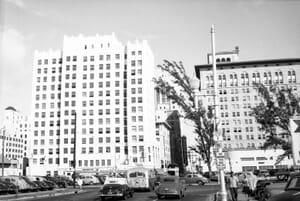 This article features two photos of a similar northbound view of Southeast Second Avenue in downtown Miami: one in 1947 (cover), and the other 1934 (Figure 1). The cover photograph highlights the buildings and tenants of SE Second Avenue in 1947. On the left and in the foreground is the Huntington building, which was constructed between 1925 and 1926 by attorney Frederic Rand on his former homesite at the corner of SE First Street and SE Second Avenue. The building was designed by Louis Kamper, and it was to be the first of several projects constructed by Rand along Second Avenue. However, the collapse of the 1920s building boom ended his dream of creating a replica of New York’s Fifth Avenue in downtown Miami.

The edifice on the right, or to the east of the Huntington, is the Ingraham Building. It was 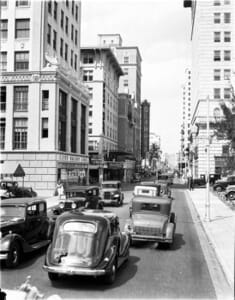 constructed by the Model Land Company and designed by the famed architectural firm of Schultze and Weaver. Construction for this building began in the summer of 1926 and opened on May 2, 1927. The tower was named for James Ingraham, a city pioneer and prior president of the Model Land Company, who passed away on October 25, 1924.

Off into the distance, to the north of the Huntington Building and on the west side of SE Second Avenue, one can see the Urmey Hotel and the Olympia Theater. The hotel was built in 1917 and it was the only hotel in downtown Miami not taken over by the Navy during World War II. Construction for the Olympia Theater began in 1925 and was completed in 1926. The John Eberson designed atmospheric theater opened on February 11, 1926.

The second photograph (Figure 1), taken in 1934, provided a similar northbound view of SE Second Avenue. The photographer’s vantage was closer to the Huntington Building and one can make out the ground floor commercial space as being occupied by the Clyde Mallory Lines which was a steamship company that ran along the east coast of the United States. This is the location of the Black Market sports bar today. 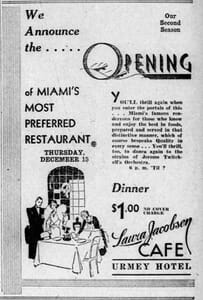 A little further north was the Laura Jacobson Café on the second floor of the Urmey Hotel. The café began service at the Urmey in 1932 by Laura Jacobson, who was a restaurateur for twenty-five years in Chicago prior to opening her establishment in Miami. The restaurant was able to seat as many as several hundred guests and provided additional space for dancing on special occasions. Given the size of the restaurant, it was a popular venue to host dinners

for large conventions in downtown Miami. The café operated at the hotel from 1932 until the mid-1950s. The Urmey Hotel was razed in 2004 and the Centro Miami Condominium tower now resides in its place.