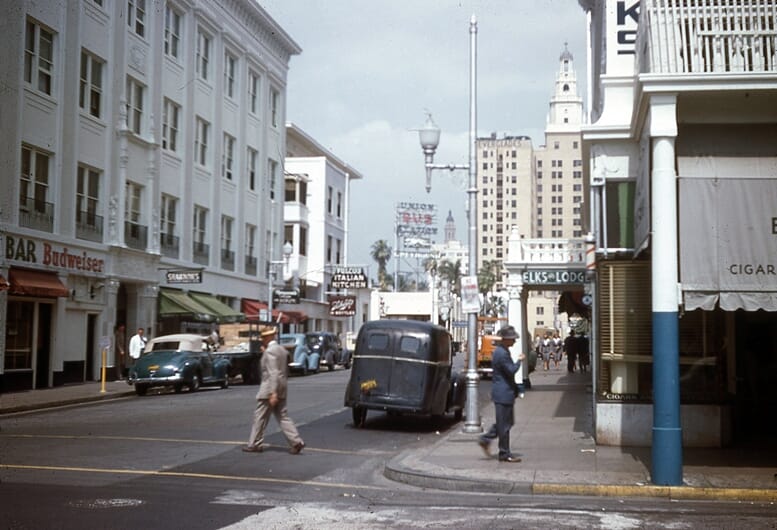 The featured photograph provides a glimpse of NE Third Avenue, aka Short Street and Avenue 3, in downtown Miami looking north in 1945. During and after World War II, Miami’s population exploded due to those who “got sand in their shoes” while they received their military training in the city prior to being deployed overseas. The Magic City was a training center for both the Navy and Army Air Corp during the war. 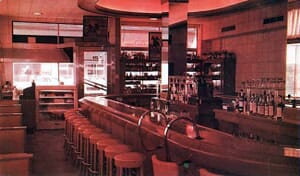 Beyond the Calumet Building, also on the west side of Short Street, was Fulco’s Italian Kitchen at 26 N.E. Third Avenue, which was in the Vail Apartments. The proprietor, Paul Fulco, was born in Montforte D’lba, Italy, and came to the United States in 1909. He opened his first restaurant, the Marine Roof Garden, in Miami in 1940. He opened Fulco’s Italian Kitchen in 1944 but was only in business at this location until late in 1945. Paul Fulco and his wife were also residents on the Vail Apartments during this time. 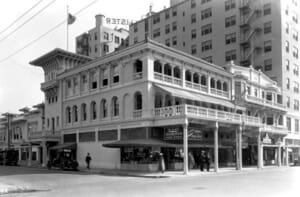 On the east side, closest to the photographer, was the Elk’s Lodge, which was the home for the club from 1912 until the late 1940s, when the group moved their organization to Brickell Point. On the ground floor of the Elks Club building, at 15 N.E. Third Avenue, was the Shangri-La Restaurant. The establishment advertised itself as serving “Authentic Chinese Dishes”, but also offered American cuisine such as “Steaks, Chops and Chicken”.

Off into the distance, to the north of the photographer, stood the Greyhound Union Bus Station and the Everglades Hotel. The bus station was built in 1932 on the former homesite of William Burdine, founder of the Burdine’s Department Store, aka ‘The Florida Store’. That building stood until 2017 when Hurricane Irma inflicted damage beyond repair. Within a year of the hurricane, the building was razed, and the former location of the building still sits empty waiting for the next big development.

The Everglades Hotel was constructed in the mid-1920s and was scheduled to open the weekend of the 1926 Hurricane. The opening was delayed, but the hotel served as housing for displaced residents who lost their homes during the storm. The hostelry stood until January of 2005, when it was razed to make room for the Viscayne Condominium complex.