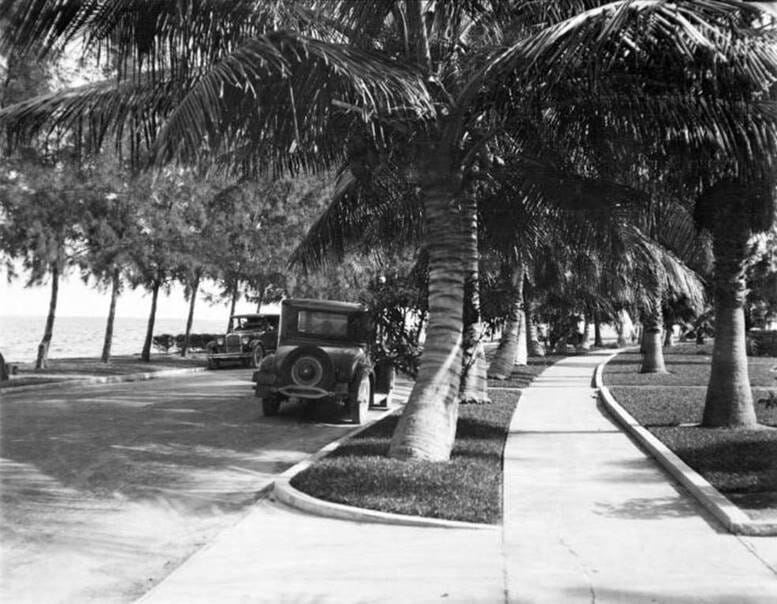 The featured photograph provides a glimpse of the beauty of South Bayshore Drive in the Point View subdivision of the Brickell neighborhood in 1925. This subdivision was the platted and developed by Locke T. Highleyman beginning in 1912. It began as a swampy marsh but developed into an area that was part of Miami’s Gold Coast in the Twentieth Century.

Highleyman took one look at Biscayne Bay from the edge of the future Point View in 1912 and was determined to develop the area. However, a lot of the land found east of Brickell Avenue and between today’s Fourteenth Street and Fifteenth Road was under water. He, along with help from a neighbor familiar with dredging, George Cook, created land out of a swamp and then built beautiful homes within this grandiose section of Southside, which was the former reference to the Brickell neighborhood in the early to mid-1900s. 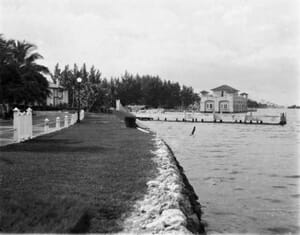 Prior to the enactment of the Chaille street naming proposal of 1920, it was the responsibility of the developer of an area to create and name the streets within their project. Highleyman leveraged an obvious street name and called the curved road along the bay as Bay Shore Drive. The street we now know as SE Fourteenth Street was named for Locke Highleyman’s wife and called Kathryn Street. The implementation of the Chaille street naming plan in 1920 changed the names of most of the streets in Point View, but Bay Shore Drive was simply given a direction and only renamed to South Bayshore Drive.

This section of street seen in the featured photograph still provides an unobstructed view of Biscayne Bay, the Rickenbacker Causeway and Virginia Key today. While a lot has changed in Point View in the last one hundred years, the serenity of this view from the sidewalk on Brickell Bay Drive is still nearly as beautiful as it was when Locke Highleyman was inspired to transform a swamp into an upscale residential subdivision.