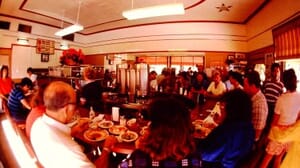 The cover photo is a picture of attendees of a Miami Cemetery Tour eating at S&S Diner at 1757 NE Second Avenue in 1986. The tour attendees convened at the diner following one of Paul George’s first cemetery tours.

He would conduct this tour many times in the next thirty one years. As the historian for HistoryMiami, Paul continues to conduct the Miami Cemetery tour on a regular basis. However, tour goers will not be able to convene across the street to the S&S Diner at the conclusion of future tours.

The diner was asked to vacate the building in September of 2016 after the block on which it resided was sold for $33 million. However, the owner and manager of the diner relocated the business to 2699 Biscayne Blvd and have recently reopened (see Miami Herald article).

The restaurant originally opened at 1757 NE Second Avenue in 1938. The business started under the name S&S Sandwich Shop. The diner began its seventy nine year journey on NE Second Avenue with a lot of support from other local businesses. Figure 1 is the opening advertisement, and support for the diner, on a page in the Miami Herald appearing on July 6, 1938.

Read more information at “Miami’s Historic Diner was evicted after 79 Years” in the Miami Herald.