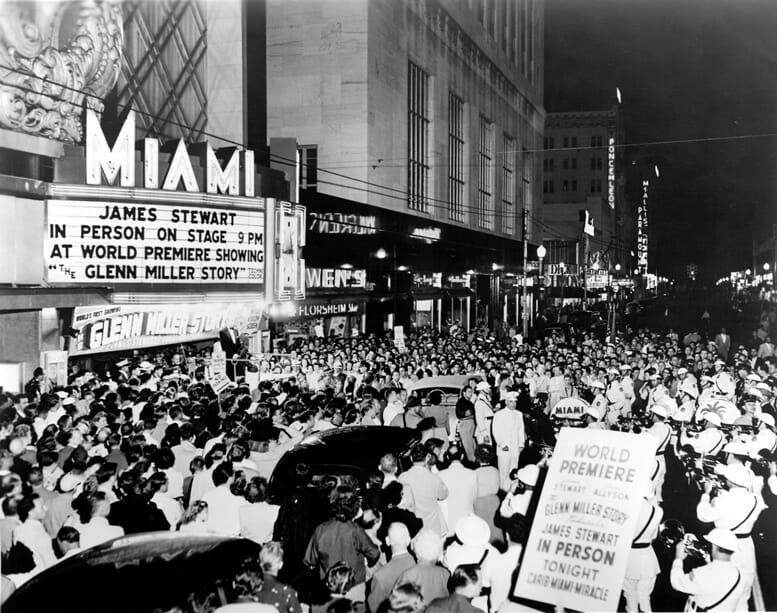 Movie Premiere at Miami Theater in 1954

This is a photo of the street scene on Flagler street the night of the world premiere of the Glenn Miller Story movie, starring Jimmie Stewart, on January 19, 1954. The days leading up to the premiere included a whirlwind schedule by the star of the picture, who attended the showing of the film in three different theaters in South Florida as part of the promotion of the movie.

The movie told the story of the renowned big band trombonist, arranger, composer, and bandleader who was one of the biggest celebrities in America by the onset of World War II. Miller joined the military in 1942 to entertain the troops during the war, when on December 14, 1944, while traveling between Bedford, England to Paris, France, his plane disappeared while flying over the English Channel. The cause for his plane’s disappearance is still a mystery. 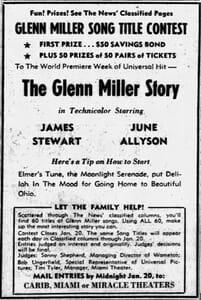 Jimmy Stewart stayed in Miami for several days for the premiere of the film. His schedule began on Saturday, January 16, at 10:00am when he was interviewed by reporters from various school newspapers at the Carib Theater in Miami Beach. He was then rushed to Hialeah Park Race Track to appear at a luncheon with John Clark, track president, during the opening of the facility for the season. He concluded his Saturday evening at a private dinner.

In addition to the activities sponsored by Universal Pictures, band conductor Cesar LaMonaca honored the memory of Glenn Miller during his orchestra’s Friday evening concert at Bayfront Park. LaMonaca conducted free concerts at the bandshell in Bayfront Park from 1929 until his retirement in 1977. He took the opportunity to honor Miller as South Florida prepared to host the premiere of the movie.

The star of the movie continued the press junket all day on Sunday and Monday including appearances and interviews with television, radio, and newspaper personnel. Tuesday morning began with a couple of ceremonial events that included planting a tree at Variety Children’s Hospital and burying a time capsule in front of the Carib Theater.

As part of the premiere of the movie throughout South Florida on Tuesday, January 19, 1954, Stewart made appearances at the Miracle Theater in Coral Gables at 8pm, Miami Theater on Flagler Street in downtown Miami at 9pm, and finally at the Carib Theater in Miami Beach at 10pm. The theaters were Wometco owned and operated movie houses.

The cover photo captures the city’s excitement for the movie and appearance of Stewart at the Miami Theater. Downtown Miami included of a robust theater district that is fondly remembered by residents of the Magic City during this time. June Allyson, who co-starred with Stewart in the movie, could not join him in Miami for the premiere due to illness.