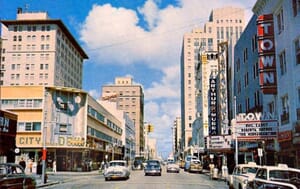 In the middle decades of the last century, Miami’s downtown served as the center of activity for daily life for a growing metropolis. The central business district was a hub for shopping, dining and entertainment. Although only a few of the buildings remain, the theaters of downtown Miami were a big part of this core of activity.

The theater district included Flagler Street and the adjacent area which contained movie palaces from three of the largest theater chains in the country. The Paramount movie studio built and operated the Olympia, Paramount and Florida theaters. Wometco constructed and ran the Capitol, Miami and Town theaters, while the Claughton chain operated the embassy and royal theaters.

There were a couple locally managed theaters in the area as well. The Flagler Theater was located on West Flagler Street and was one of the first theaters to offer movies with Spanish sub-titles. The Dixie Theater was a drive-in theater and was located adjacent to the Gesu Church.

The Overtown community also was flush with theaters as well. The Lyric, Harlem, Modern and Ritz theaters provided entertainment to the historic black community during a time of segregation. While theaters such as the Olympia offered segregated seating areas, Overtown’s movie palaces provided the community with entertainment options located within the neighborhood.

Tune into this week’s podcast episode to hear more about the history of the downtown theater district in mid-century Miami. Below are additional resources and articles that tell the story of the theaters discussed in this episode.