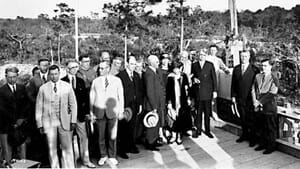 Cornerstone Ceremony for University of Miami on February 4, 1926

Coral Gables was more than just a master planned development erected during the building boom of the 1920s, it was where its founder, George Merrick, found the perfect intersection of poetry and progress. Merrick was both a pragmatist and a dreamer. He studied the City Beautiful movement very closely to the point where he envisioned Coral Gables before the first shovel was planted in the ground of the family plantation. He even nicknamed his new municipality “The City Beautiful” after the movement he studied.

George was an eternal optimist who was not deterred after the devastation of the 1926 Hurricane. While this great storm may have ended the dreams of many of the land speculators who converged on Miami in the 1920s, Merrick kept building. However, he wasn’t able to overcome the setback presented by the stock market crash of 1929.

Tune into this week’s podcast episode to hear more about Coral Gables and its visionary founder, George Merrick. Below is a book recommendation and an article on Merrick and The City Beautiful.