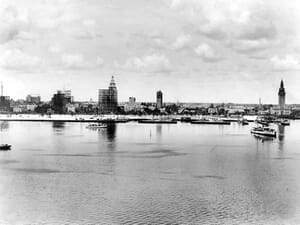 This podcast episode discusses Miami’s great building boom of the 1920s. The state of Florida attracted a lot of capital for real estate speculation during the roaring twenties and South Florida was the epicenter of this investment activity. While the boom peaked in the mid-1920s, the progression toward this crescendo began in latter part of the 1910s and early 1920s. It was decade when Miami evolved from a quiescent small southern city into one of the fastest growing metropolises in the country.

The construction frenzy peaked in 1925 but was hampered by several seminal events beginning in early 1926. While the boom was on life support by the fall of that year, it was all but over following the great hurricane of 1926. While the boom decade ended nearly a century ago, it is still considered one of the most impactful decades in Miami’s relatively short history.

Tune into this podcast episode to hear more about the stories and milestones of Miami’s great building boom of the 1920s. As we reflect on Miami’s growth spurt of a hundred years ago, the development of the Magic City during this era provided a lasting imprint on downtown Miami and the surrounding communities.