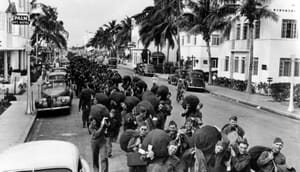 This podcast episode describes the transformation of the greater Miami area after the United States entered World War II. The area became the training facility for the armed forces. Downtown Miami was converted into the southern command and training facility for the Navy, and Miami Beach became the training grounds for the Army Air Corp. The focus of the entire metropolitan area was the war effort.

The podcast also details the contribution of the Richmond Air Base, Dinner Key in Coconut Grove and the Miami Airfield to preparing the armed forces for battle overseas. Women played a key role in Miami area as members of the Women’s Army Corp, or WACS. Like so many other cities, downtown Miami was the center of the celebration after the announcement that the Japanese surrendered. This podcast episode provides a detailed picture of South Florida during World War II.

Tune into this week’s podcast episode to hear more about greater Miami during World War II. Below are additional resources that are relevant to this episode’s topic.