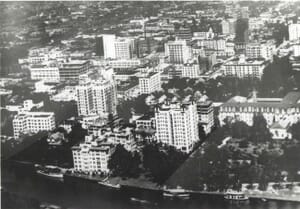 This podcast episode features historic Fort Dallas Park in downtown Miami. Once the core of Julia Tuttle’s estate on the north bank of the Miami River, it became a fine upscale residential area following her death. Harry Tuttle, Julia’s only son, platted out lots that spanned from NE First Avenue to South Miami Avenue from east to west, and the river to midway between SE Third and SE Second Street from south to north. There were many one to two-story single-family homes in this subdivision of downtown Miami.

The onset of the building boom of the 1920s changed the configuration of the area and structure of the buildings found in Fort Dallas Park. Many of the single-family homes were replaced with mid-rise apartment and hotel buildings. Places like the Granada, Julia Tuttle, Patricia and Fort Dallas apartment / hotels were mainstays in Fort Dallas Park until the area was carved up due to the extension of the highway system into downtown.

Tune into this week’s podcast episode to hear more about the evolution and history of Fort Dallas Park in downtown Miami. Below are additional resources and articles that tell the story of this once highly regarded area in Miami.