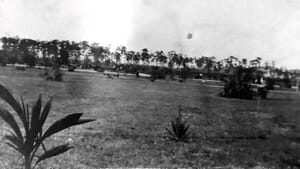 This podcast episode features the story of the Miami City Cemetery. Aside from a city’s history museum, there may not be a better way to learn about an area’s past than a walk through its oldest cemetery. The city cemetery on NE Second Avenue certainly tells the story of early Miami.

Miami’s signature graveyard has interred many of the city’s most important pioneers. From railroad men who were dispatched by Henry Flagler to the Miami River to develop the north bank, to opportunists that crafted their legacy during the early years of the city, many of Miami’s founders and contributors are buried in the city cemetery.

One of the first burials in the city was the mother of Miami, Julia Tuttle. While she wasn’t the first interment, her funeral and burial highlighted the importance of having a city cemetery. It was designed to be lush and respectful of those who call it their final resting spot. However, whether as a byproduct of major hurricanes or human malfeasance, Miami’s iconic graveyard has had its share of adversities.

Tune into this week’s podcast episode to learn more about the history of the Miami City Cemetery. The photographs are courtesy of HistoryMiami Museum.