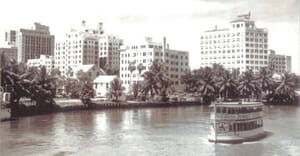 The second part of the history of the Miami River describes the evolution of the river from the mid-1800s through modern times. Prior to the Brickells arriving to the area, the big cash crop in the area was the cultivation and processing of the cyad plant, known as Coontie. It was one of the few industries that provided trade for the area.

After the Tuttles and Brickells came to an agreement with Henry Flagler, the river changed dramatically. The news of Flagler extending his railway to what would become the city of Miami attracted a lot of new people. The first port of Miami was setup along the north bank of the river near today’s Miami Avenue as a result of the influx of civilization to a once desolate paradise.

Within twenty-five years after incorporation, the tributary played a big role in the distribution of alcohol during prohibition. There were several confrontations on the water between the coast guard and rum runners. The waterway also played a pivotal role during World War II when ship and boat yards were converted into facilities to convert and construct vessels to support the war effort.

Tune into this week’s podcast episode to hear the rest of the history of the Miami River. Below are additional resources and articles about the river and its past.