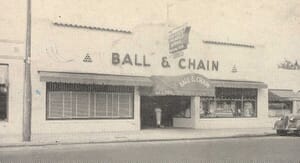 This podcast episode features Miami’s Ball & Chain. Within the confines of Little Havana stands an institution that has lived a couple of lives. Within the walls of a building that was constructed in 1930 is an entertainment venue that provides libations, live music and dancing in the heart of the Tamiami Trail.

In its first incarnation, the night spot provided live music and dancing beginning in 1935. By the late 1940s, the entertainment lineup included live Jazz and burlesque shows. When Henry Schechtman and Ray Miller bought the establishment in the early 1950s, they began booking well-known black entertainers such as Count Basie and Billie Holliday, and a very talented but troubled white entertainer by the name of Chet Baker.

Although the first run of the venue shut down in the late 1950s, it was resurrected again by Bill Fuller and his partners, Zack and Ben Bush, in the first decade of the twenty-first century when they began to restore the place back to its heyday. The Ball & Chain is one of the most recognizable establishments in the heart of Little Havana today.

Tune into this week’s podcast episode to hear more about the Ball & Chain. Below are additional resources and articles that tell the story of the fabled establishment and its fascinating history.