This podcast episode features the father of Miami Beach, Carl Fisher and one of his most notable hotels. Carl Fisher was a serial entrepreneur who made his fortune marketing technology to provide headlamps for early automobiles. After he and his partner, James Allison, sold Prest-O-Lite to Union Carbide, Fisher was in search for his next project.

As fate worked its magic, Fisher ended up “retiring” in Miami at home he bought sight unseen in Miami’s upscale Southside neighborhood. Southside is now referred to as the Brickell neighborhood. After meeting John Collins and agreeing to help him finish a wooden bridge to an unnamed barrier island, Fisher found his next project. Fisher was given land on the island as part of the agreement with Collins. 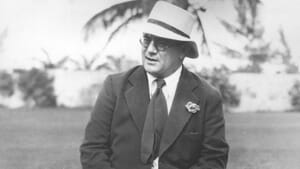 After expanding his land holdings on the island by dredging bay bottom and buying additional acres, Fisher envisioned the island becoming an upscale resort for winter visitors. One of Fisher’s big projects in 1920 was his extravagant Flamingo Hotel. The hotel opened on December 31, 1920.