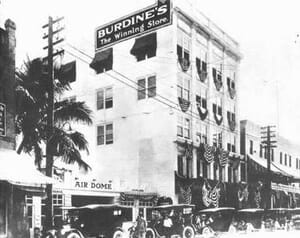 This podcast episode features the buildings that held the distinction of being the tallest edifices in Miami from 1912 through the present. From the time that Roddy Burdine decided to build Burdine’s five-story retail and office building until the recent completion of Panorama Tower, Miami has had several buildings that have held the distinction being considered Miami’s tallest.

The construction of the Burdines and Ralston buildings, as well as, the McAllister Hotel, represented a time period just prior to the great building boom of the 1920s. The boom introduced several new buildings that would be considered modest in comparison to today’s skyscrapers. The 1920s represented a change in the tallest building designation twice after the completion of the Miami Daily News Tower, now known as Freedom Tower, and the Dade County Courthouse.

Within the last twenty years, the tallest building designation was taken by the Four Seasons Hotel in Brickell when it was completed in 2003. Recently, with the opening of another project located in Brickell in 2017, the honor of tallest building shifted to Panorama Tower. This will likely change in the next ten years as there are several projects that have gotten approval to go beyond the height of Panorama Tower.

Tune into this week’s podcast episode to hear more about Miami’s tallest building through the years. You can access the podcast on iTunes, Stitcher, Soundcloud and on the Miami-History website.