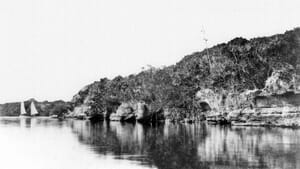 Platted in 1911 and incorporated in 1921, the town of Silver Bluff was independent for a short period of time. It was one of several municipalities that was annexed by the city of Miami in 1925. Nestled between the Miami’s original southern boundary and the town of Coconut Grove, Silver Bluff was named for the bluff, located along the eastern edge of the quarter, that appears silver when touched by morning sunlight.

Although the community was split on the decision to become part of the city of Miami in 1925, it has maintained a character all its own since the annexation. It is still a single-family residential community and hopes to maintain its charm from its days as an independent municipality (1921 – 1925).

Tune into this week’s podcast episode to hear the short history of the town of Silver Bluff. See the resources section below to access the podcast episode on the Annexation of 1925.