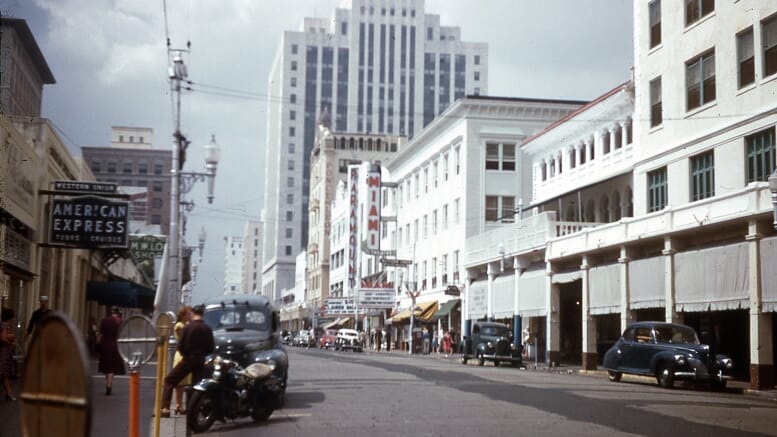 Dr. Paul S George shares the history of Short Street (aka NE Third Avenue), and Flagler Street during a celebration of the completion of Phase I of the Flagler Street Scape Project. Post photo is of Flagler Street in 1946, and photo embedded in video player is from 1954, both looking west from roughly where Dr. George was speaking on Friday, August 19, 2022.

Short Street was nickname given to Avenue A, the original name of the street traversing from Flagler Street to NE Second Street on the eastern edge of downtown Miami. The name was changed in 1920 as part of the Chaille Plan. Originally a residential street featuring the homes of some of Miami’s most prominent early pioneers, it evolved into a commercial thoroughfare beginning on the eve of the great building boom of the 1920s.

Flagler Street, originally named Twelfth Street and also changed during the implementation of the Chaille Plan, has been the centerpiece of the central business district of downtown Miami. Although originally a mix of residential and commercial structures, it quickly became the Magic City’s most important street very early in the city’s history.

Click on the play button above to hear Dr. Paul S. George discuss the history of both streets during a talk he gave for the celebration of the completion of phase I of the Flagler Street Scape project. Miami’s preeminent historian provides a lot of history in an eleven-minute talk on downtown Miami.