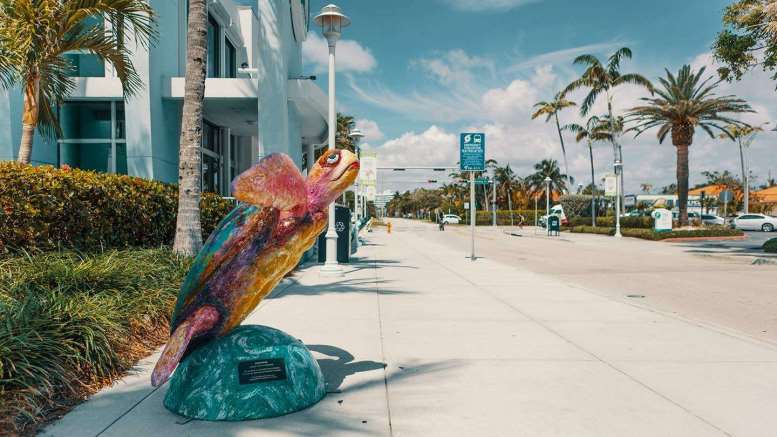 In our first article on the history of the Town of Surfside, we examined its early decades as a municipality while noting that its contemporary story deviates sharply from those earlier times. While no available data exists for the number of new construction permits in the early years of the present century, Surfside has increasingly come within the sights of major architects and developers resulting in the arrival of modern trends in the design and development of hotels and condominiums on Collins Avenue.

The second and final installment of this two-part series of articles will capture Surfside in modern times. The first two decades of the twenty-first century has led to remarkable change throughout South Florida, and the town of Surfside has been on the forefront of the modernization of the Collins Avenue corridor. The Four Seasons Hotels and Resorts has restored the existing clubhouse and cabanas of the Surf Club and built three stunning glass additions, designed by Pritzker-prize winning architect Richard Meier and Kobi Karp, bracketing the venerable club building. The Terra Group offers “starchitect” Renzo Piano’s Eighty-Seven Park, with its fluid design overlooking the Atlantic Ocean from its location next to a thirty-five-acre park.  Farther up Collins Avenue, on the ocean side of the thoroughfare, stands the luxurious Fendi Chateau Residences. Nearby is the posh Grand Beach Hotel Surfside, which opened to the public in 2013. On the west side of Collins Avenue is the striking glass Residence Inn by Marriott Miami Beach/Surfside.

The rash of new development has led to the razing of many apartment buildings and small hotels designed in the Streamline Moderne (Art Deco), or Miami Modern styles, which trace their origins to the 1930s through the 1960s. These changes have activated preservationists to focus on the rapid gentrification on the eastern flanks of town, both within and outside of Surfside, to fight for protection of buildings representing the vintage architecture of yesteryear. Accordingly, with support from the Town of Surfside, Metro-Dade County’s Historic Preservation Board created the Collins Avenue Historic District in 2016, which specified nine buildings on the west side of Collins Avenue and the east side of Harding Avenue, between 90th and 91st streets. Each of these nine structures exhibits sterling representation of Streamline Moderne or Mid-Century Modern styles of architecture. These buildings were designed by master architects whose ranks include Henry Hohauser, Russell Pancoast, and Richard Fein. In addition, an historic Surfside apartment complex along Collins Avenue, along with the façade of a nearby architecturally distinctive apartment building, received historic designation from the same board.

These changes contrast with the Surfside of a half century earlier, which, with a flourishing downtown and modestly priced homes, established itself as a pleasant seaside community with a mix of middle class and upper middle-class residents. Many observers, including residents, visitors, and members of nearby communities, remarked on the town’s quaintness and its downtown which featured a variety of retail establishments. From its inception, the town offered many outlets for residents to come together for community-wide events and observances, providing two parks and a tennis complex to support such activities. Ground Zero for governance is the town hall at 9293 Harding Avenue.  Completed in 1957, the town hall underwent a complete renovation in 2001. Today, it shares a portion of its footprint with the resin and fiberglass sculptures of Florida Loggerhead Sea Turtles, whose real-life versions lay their eggs on its beachfront each year. (Even Manatees are known to mate in the waters just off Surfside’s beach).  There, on the “Turtle Walk,” a public art exhibition celebrates the Loggerheads while highlighting sea turtle conservation by featuring thirteen turtle sculptures, standing five feet high, each painted by a renowned area artist.

One of the most important projects sponsored by the city was the completion in 1962 of the Surfside Community Center on land the municipality had assembled for fifteen years. Quickly, this ocean front facility became the center of activities and even social life, hosting weddings, community gatherings, a library, and an Olympic-sized swimming pool. Its eastern edge afforded easy access to the beach. The town razed the center in 2008 to make room for a larger and more modern facility, which opened three years later, and included municipal offices, a meeting room, grill, children’s water park and lap pool.

Immediately east of the community center lie the deep blue waters of the Atlantic Ocean. The beach remains an important part of the community and the venue for many events.  In recent years, the town’s Parks and Recreation Department has sponsored an annual 5K race. Shoreline erosion along the oceanfront of Miami-Dade County has necessitated periodic re-nourishment of troubled areas, including portions of Surfside’s beachfront in the early 1990s, and again in 2018. The town has attracted its share of “notables” from organized crime figures like Tony Accardo and Sam Tucker to famed author Isaac Bashevis Singer, who received the Nobel Prize in Literature in 1978.  Surfside’s 95th Street is co-named Isaac Bashevis Singer Boulevard in honor of the great Yiddish poet and short-story author. With a nod toward the literary, the town has renamed streets west of Harding Avenue for American and British literary figures, whose ranks include Irving, Hawthorne, Emerson, Byron and Dickens.

Today, Surfside can claim a population of six thousand.  Like other parts of vast, sprawling Miami-Dade County, the town boasts a variegated population of many ethnic groups, with forty percent speaking Spanish as their first language. Even more striking is the fact that fully forty-five percent of its residences are foreign born, with many hailing from Europe and elsewhere in the world.

By the down of the new century, Surfside resembles other water-oriented municipalities in the county with the large-scale construction projects, along Collins Avenue, that have transformed the municipality Figure 5: Entrance to Building in Surfside

into coveted high-end hotels and condominiums. Where the town differentiates itself from other adjacent municipalities is its downtown, which offers unique dining establishments and “mom and pop” businesses covering a rich array of services. The central district of Surfside has maintained its luster since its beginnings in the 1940s.

The future appears bright for this well-managed community with a beautiful beach on its eastern flank, the turquoise waters of beautiful Biscayne Bay to the west, ample amenities for residents and visitors, and real estate that has come within the sights of many of the nation’s most prominent architects and developers.  It will be fun to observe the continuing evolution of a town whose roots rest not just in the legendary real estate boom of the 1920s, or in the era of economic depression that followed, but with Miami’s earliest inhabitants whose presence there is counted not in centuries but in millennia.