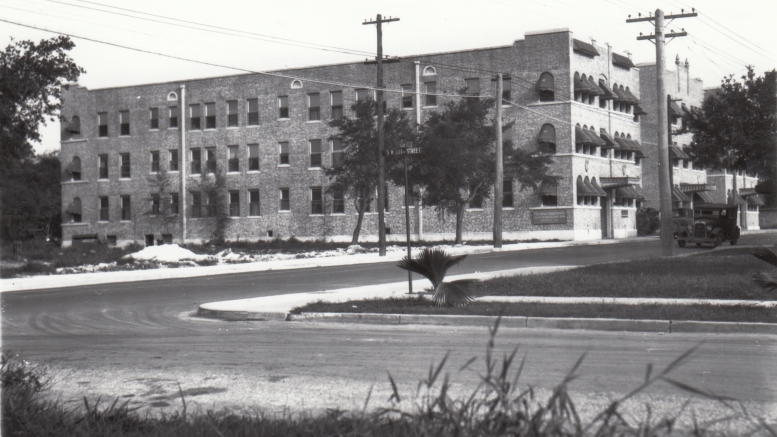 Long before Flatiron Miami was conceived along South Miami Avenue in the Brickell neighborhood, there was the Martina Apartments. When the building was completed in 1922, it was considered one of the largest apartment buildings in South Florida and provided much needed housing for Miami on the eve of the great building boom of the mid-1920s.

While the Martina Apartments has been gone for more than twenty years, its footprint in the Brickell neighborhood became a valuable parcel of real estate. The CMC Group, headed by Ugo Colombo, purchased the apartment building’s former location along with a smaller rectangular lot to the south of Eleventh Street. Flatiron was originally planned to begin construction in 2008 and would have been the tallest building in Miami when it was completed. However, the recession of 2008 delayed a project that ultimately began in 2016 and is anticipating its completion by the summer of 2019. By the early 1920s, Miami’s housing was not keeping pace with its growing population. According to the census, Miami grew from 5,471 to 29,549 residents from 1910 until 1920. It was in early 1922 that P.B. Bechard and C.T. Hansen began a project to add thirty-six apartments and twelve hotel rooms as part of a three-story, three-wing complex in the heart of Southside, which is how locals referred to the Brickell neighborhood in the first half of the last century.

The design of the building was a U-shaped where the base of the U was located along South Eleventh Street. The first wing, which was adjacent to South Miami Avenue, was completed by the Spring of 1922. The smaller wing along Eleventh Street, or the bottom of the U, was mostly complete by May. The last wing, which was adjacent to Miami Road, was started on July 1 and was ready for occupancy by the end of the year. Miami Road is known today as either Brickell Plaza or SE First Avenue.

The apartment building featured entrances on both South Miami Avenue and Miami Road. It had a center courtyard that was nineteen feet wide and was beautified with flowers and shrubbery. It had a cement walkway in the center of the courtyard. Both entrances were considered a main entrance for tenants. The building proudly stated that every room in the building had an “outside view” to either a street or the courtyard.

At the center of the three wings was a seven-foot-wide hallway to provide residents with interior navigation. The exterior was described in a Miami News article dated May 7, 1922:

“The exterior of the house is done in tiffany finish with hydrated lime coloring. The first coat gets a rough dab coat of cement after which four color coats are put on from the bottom up and in order – chocolate, dark gray, old blue and slate. The exterior trim is cobalt blue to match the old blue used in the stucco finish. Stationary awnings in colors that blend in with this color arrangement having been used thus doing away with the unsightly effect of awnings in all stages of positions.”

Each apartment had a large private porch that could be used for outside dining. There were French doors that led from the living room to the patio. The floors of each porch consisted of large terrazzo tile. The building featured apartments with one, two and three-bedroom configurations. The hotel rooms were configured as either a single-room or as a suite.

The Miami News article in 1922 also highlighted that the building had its own incinerator and hot water supply. Each apartment was outfitted with electrical outlets throughout, including one on the patio. Each kitchen included electric powered range stove and refrigerators. Electricity was becoming more common in new buildings in Miami by the early 1920s. There were also vacuum plugs in the hall at “frequent intervals” to allow each resident to vacuum their unit.

The same Miami News article in 1922 described the interior finishings:

“The floors and woodwork throughout will be of pine. The floors will be done in natural finish while the woodwork will be in silver gray with mahogany finish doors. The walls in all units will be a smooth sand finish. The electrical fixtures will be in various finishes such as plum and gold, silver and so on.”

When the Martina Apartments opened in 1923 some winter visitors, who would typically stay at the Royal Palm Hotel in downtown Miami, decided to reside at Southside’s newest apartment building. The Brickell (1917), and Bulmer (1919), apartments had already been open for a couple of years prior to the opening of Martina, but there was more demand for housing than there was supply by January of 1923 for the Miami metropolitan area.

Florence Pauly, an accomplished pianist and music teacher, signed a lease at the Martina Apartments on January 10, 1923. A couple of weeks later, it was reported by the Miami News that accomplished pilot and aviator instructor, F.H. Griffith, moved into the building for the winter season. He piloted Miami residents and visitors on sightseeing tours of the area, as well as, transport interested parties to the Bahamas for day trips. The apartment building was open slightly more than a year when ownership changed on May 6, 1924. The transaction involved cash and a swap of property between the two parties. The partners who built the apartment building, Bechard and Hansen, sold the building to Dixie Development Corporation for a combination of $100K in cash and the terrace subdivision in Hollywood, Florida, which was valued at $225K at the time of the sale. In total, Martina was valued at $325K for this transaction.

Dixie Development was headed by C.F. Turner who negotiated the inclusion of property to the west of the apartment building on the northwest corner of South Miami Avenue and SW Eleventh Street. At the time, the property consisted of a single building for storage and parking. A few years later, in 1932, a small two-story building was constructed on this lot to provide a combination of retail on the ground floor and apartments on the second level. The address of this building is 1044 South Miami Avenue.

The first tenant in the building was Martina Pressing and Cleaning. The cleaning business was only viable for a couple of years before Jack Gillespe opened a grocery store at the location in 1934. He ran his market there until 1940. Following Gillespe’s ownership, the neighborhood grocery store had several different names including Ungar’s Food Market and Southside Market. This building still stands and has been host to several restaurants for the past thirty years. It is the home of Empanazzio Restaurant today.

In August of 1924 the newly formed South Miami Avenue Improvement Association announced some changes along the main thoroughfare adjacent to the Martina Apartments. The eastern edge of South Miami Avenue was widened, which shrunk the sidewalk width next to the apartment building. The association also announced the extension of trolley tracks along the avenue as well. The tracks were laid in the middle of the avenue and ultimately provided a route for trolley service to connect Coral Gables to downtown Miami. In August of 1928, the owners of the apartment building took out a mortgage of $45,000 for the property. The great Hurricane of 1926 really changed the fortunes of Miami and it is possible that the mortgage was to help the Dixie Development Corporation navigate the difficult financial times following the economic impact of the storm.

However, at the peak of the Great Depression in 1934, the owners of the apartments defaulted on the mortgage and were unable to pay their property taxes. On February 26, 1933, the property was foreclosed and put into receivership. In November of 1934, the mortgage lender, headed by Lewis A. Frazee, purchased the Martina Apartments for $85,000 as part of the foreclosure sale. Only a month after Frazee acquired the property, there was a fire started by a faulty circuit breaker. Fortunately, the apartment building was located across the street from Miami Fire Station number 4 and there wasn’t much damage caused by the blaze.

Lewis Frazee owned the building for less than two years when he sold it to Johnston family in 1936. Else May, the daughter of the new owners, was officially considered the proprietor of the hotel. She hired Mrs. J.H. Coffee as the manager of the building to make the Martina Apartments the largest apartment building or hotel both owned and operated by women in the state of Florida.

On July 4 of 1937, it was announced that the new ownership group would invest $20,000 in the apartment building. In today’s dollars, that would have been more than a $355,000 investment in upgrades to the apartment complex. The building would thrive under the ownership of the Johnston family and management by Coffee for several decades.

National Register of Historic Places in 1989

As the decades progressed, the Martina Apartments began to show her age. Many of Miami’s downtown residents moved out of the city and to the suburbs following the availability of the interstate system in the 1960s. The apartment building began to appear as more of relic from a forgotten time sitting along South Miami Avenue.

An effort was made to preserve some of Miami’s oldest buildings in the 1980s and the Martina Apartments were included as part of a National Historic District of Downtown Miami in 1989. Despite it being located south of downtown, it was called out as a contributing structure for the district. While some residents saw the building as an eye sore and relic from the past, the inclusion on the national register gave hope that the building could find a second life in the heart of the Miami’s historic Brickell neighborhood.

However, the hope was short-lived. Although it isn’t exactly clear which year, the Martina Apartments were razed in the mid-1990s. Whether it was the age of the building or its haunting appearance in a soon to be gentrified neighborhood, it was clear the 1920’s era building was no longer welcome in an area that would change dramatically over the next twenty years. After the demolition of the apartment building, the land of the former site became a parking lot to serve the changing needs of the neighborhood. As mentioned at the start of this article, the former lot and an adjacent lot was purchased by Ugo Colombo’s CMC Corporation in the mid-2000s. His plan was to build Miami’s tallest condominium skyscraper in 2008, but opportunity lost its timing and the project was put on hold. CMC was planning on erecting a 736-foot building consisting of 70 stories of condominiums.

In 2017, Colombo signed for a loan of $236 million to finance the construction of the building he planned to erect in 2008. The building topped off at 64 stories by the end of 2018 and is scheduled to be complete by late-summer or fall of 2019.