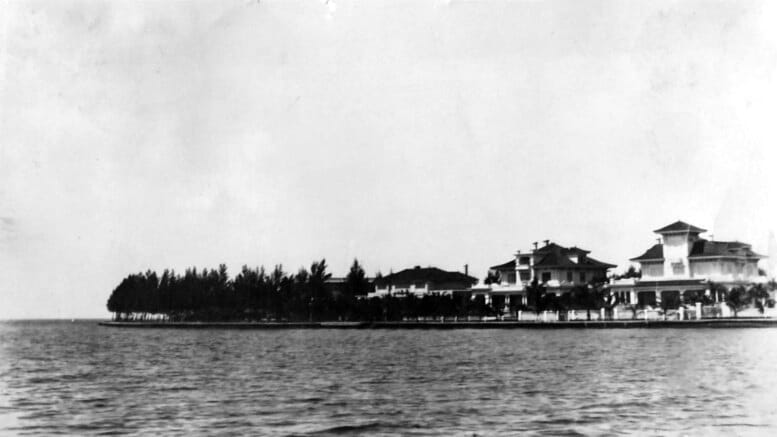 McGraw and Logan Mansions in Point View in 1920

The home located to the south of the Fay Mansion was built by Edwin C. McGraw in 1916. His story was like so many of the winter visitors to Miami in the early twentieth century. McGraw built his fortune in the north and enjoyed the good life in Miami.

The McGraw Mansion was built in 1916 and remained a part of Point View until the late 1950s. It was one of the first mansions to be razed to make room for one of Brickell’s first skyscrapers. The Point View North Apartment building was only 13 stories, but it represented the beginning of a trend that has continued to modern day. The single family home to mid-rise to high-rise evolution may have begun with the section of Point View where the McGraw mansion once stood. 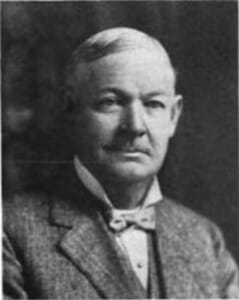 Years before Point View had begun development, Edwin McGraw was a frequent winter visitor in Miami. He was a boating enthusiast. In 1915, he worked with civic leaders to try to convince the Gold Cup to make Miami its permanent home. He also contracted with a boat builder to create a “world beating speed boat” that would allow him to enter the competition if it did move to Miami.

McGraw was born in London, England in 1880. He came to the United States in 1905, where he introduced a high-grade European tire called the Kempshall. He lived most of his life in Pittsburgh where he began his career as an executive of a company that was a pioneer in rubber composition for roofing.

In 1909, Edwin founded The McGraw Tire and Rubber Company. The company specialized in the manufacture of high-grade pneumatic tires, solid truck tires and inner tubes. The company grew rapidly and expanded throughout the country. With the success of his company, McGraw grew his personal fortune.

He also got involved with the local business community in South Florida. He became president of the Fidelity Trust & Mortgage Company and served on the board as a directors for the Fidelity Bank and Trust Company in Miami. 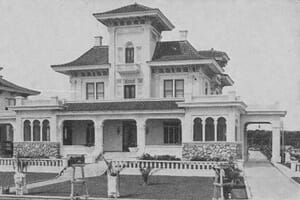 Given his business association with Locke T. Highleyman, it was only natural for Edwin to build his winter home in Point View. The McGraw’s purchased a lot in Point View in March of 1916. The property was located along the east side of the subdivision with a beautiful view of Biscayne Bay. The address was 1408 South Bay Shore Drive.

The lot dimensions were 200 feet in width by 400 feet in depth. Once completed, the house was a two-stories of poured concrete with a tiled roof. The design of the home was consistent with the neo-classical design found throughout Point View.

The property featured two apartment garages that could accommodate space for five automobiles. One of the apartments possessed six rooms and the other apartment was configured for four.

A notable feature of the home was the garden. It was beautifully landscaped and featured a dense array of palms and tropical shrubbery. In an article on June 12, 1928, the Miami Herald referred to the property as “one of the show places on millionaire row”.

The involvement in building several organizations had its toll on Edwin’s health. During the spring of 1920, McGraw was in very poor health. After several months of illness, he passed away on June 15, 1920 in his beloved Point View home.

Edwin’s widow remained in the home five years following the death of her husband. She sold the home to a prominent Miami business leader. J.K. Dorn and family moved into the lavish Point View home in the fall of 1925. Dorn purchased the home for $175,000. 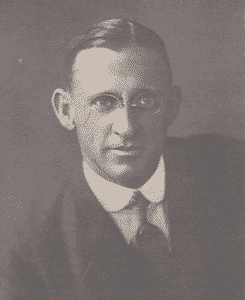 Many of the residents of Point View made their fortunes outside of the area. Dorn was an excellent example of a pioneer businessman that built his fortune and reputation in Miami. Like many other Miami pioneers, he migrated south from North Florida following the freezes of 1894-95.

After a brief stay in West Palm Beach, Dorn made his home in Miami. He originally opened a drug store, but realized there was opportunity in real estate. He formed the J.K. Dorn Real Estate & Investment Company. His firm negotiated many of the largest real estate transactions in early Miami.

Dorn also got involved in the automobile business. He was one of the largest distributors of the Packard and the Studebaker cars in South Florida. He was also a charter member of the Miami Chamber of Commerce.

Dorn and his family did not remain in Point View for very long. Just three short years after buying the McGraw mansion, he decided to sell it in 1928. He took a loss on the home when he sold it for $97,000.

The next to own 1408 South Bay Shore Drive was a millionaire dairy man from Akron, Ohio. W.E. Wright purchased the home from J.K. Dorn in June of 1928.

However, Wright would not enjoy his winter home for very long. On November 18, 1929, he died in a car accident while traveling to work in Akron.

His widow, Mae Wright, owned the Point View mansion until 1932. She sold the home to a self-made millionaire from Decatur, Illinois. 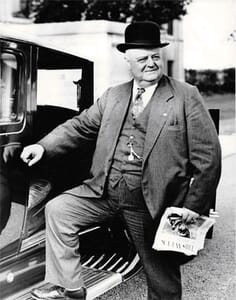 A.E. Staley was born in 1867 to a family of farmers in Julian, North Carolina. He lost his father by the time he turned 18 years of age, and felt obligated to provide for his mother. He worked as a traveling salesman for a dozen years. One of the products he sold was corn starch.

In 1898, he settled in Baltimore, Maryland and started his own corn starch packaging business. By 1909, he decided to buy the former Wellington Starch Company in Decatur, Illinois. It was a defunct manufacturing facility that Staley re-opened as the A.E. Staley Manufacturing Company.

The company became one of the leading manufacturers of corn products. They produced over 70 different products of from corn starch.

By the time that A.E. Staley arrived in Miami in 1930, he was very wealthy. He was also ready to slow down. He and his wife took two years to determine where they wanted to purchase a home. The Wright home came on the market at the right time.

He hired Arthur Laidler-Jones as the architect for a $50,000 remodel project. In addition to extensive re-modeling of the interior, the project provided for the addition of a tea room and an annex to the home.

The A.E. Staley Starch Company was the sponsor of many semi-professional sports organizations in the 1910s. They sponsored a company baseball team as well as a company football team.

The football team was called the Decatur Staleys. The Staleys were one of the founding teams to what became the National Football League. Staley thought he had a pretty good football team and wanted to be competitive with the other teams in the newly formed league.

In 1919, Staley reached out to George Halas, who was ending his baseball career. He recruited Halas by convincing him he had a talented team that only needed the proper leadership. Halas agreed to come to work for the A.E. Staley Starch Company as a “salesman” and run the football team. He also played outfield for the company baseball team.

Although the team did very well on the field during the 1920 season, it lost a lot of money. At the conclusion of the season, Staley turned the team over to Halas and let him relocate to Chicago.

The next year, Halas changed the name to the Bears and the rest is history. Since 2003, the Chicago Bears mascot is called Staley Da Bear in honor of the original name, and owner, of the team.

Augustus Eugene Staley died in his Point View home on December 26, 1940. He was survived by his wife, Emma, and his three daughters.

His widow remained in the home until she sold it in the mid-1940s. Emma lived in South Florida until her passing in February of 1967. 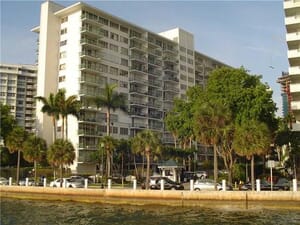 By December of 1958, White Development Corp and Point View Brickell Properties were ready to break ground on the first Bayfront skyscraper apartment building. The plans called for a 13-story luxury apartment building that would cost $2.5 million to build.

However, the project required a zoning variance in order to get the proper permits to get started. The variance approval process delayed the project by nearly five years. Construction for the Point View North Apartments began in 1963 and was completed within a year. It opened in 1964.

The apartment building was converted to condominiums in 1974. As part of the conversion, the building also changed names to the Brickell Bay Tower Condominiums.

Elma K. Vaughn lived in the building until just prior to her death in 1973. She was 77 years old. Elma arrived in Miami in 1905 as a child. After graduation from the Virginia Intermont College and Peabody Conservatory of Music, she performed with the Kaufmann Trio at the Royal Palm and Urmey hotels in the early 1920s.

She became one of the first female orchestra leaders that conducted accompanying music to silent films in local theaters. Later, she opened her own studio to teach piano and violin to students from all over the world. She was also very active at the First Presbyterian Church on Brickell Avenue.

Much like the McGraw home, the Logan mansion was also a unique and beautiful structure. It was located next door at 1412 South Bay Shore Drive.

The next article in the series on the mansions of Point View describes the first home occupied by the Highleyman family. They didn’t live there long because Locke T. Highleyman received an offer too good to refuse. He sold the home to JP Logan, a wealthy New Yorker who made his fortune in white goods.