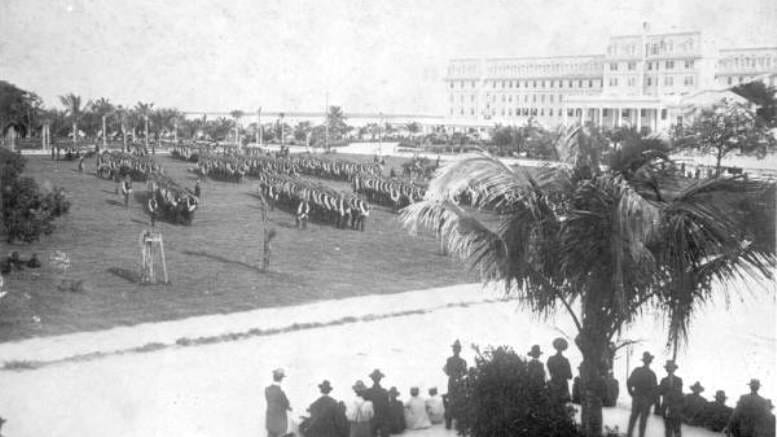 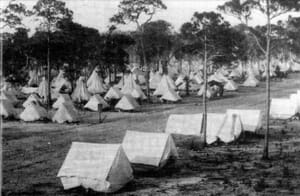 As noted in part one of this series, Miami finally secured a military training camp in June of 1898 as fighting continued in Cuba between the United States and Spain over the issue of Cuban independence. The work of the Flagler organization to convert a sandy pine forest into a military camp continued throughout the month. Laborers focused primarily on the eastern portion of the camp.

Extant portions of the fledgling city were also enlisted as elements of Camp Miami. Flagler opened his posh Royal Palm Hotel, typically closed during the summer, as officers’ quarters.  Royal Palm Park, located directly north of the hotel, was designated as the venue for soldiers’ drills.

Miami’s merchants were excited over the prospects for increased business, advertising many of their wares as “soldier boy’s specialties.”  They were not disappointed, as soldiers’ purchases cleaned out the inventories of many stores. 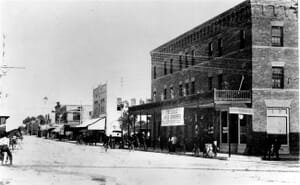 Not only did Camp Miami prove a boon for the city’s businesses, but it also gave rise to the Burdines department store, Miami’s most enduring business.  William Burdine was operating a dry goods store in Bartow, a small community in central-west Florida, when the Spanish-American War erupted.  Upon learning that Miami would be hosting troops, William Burdine sent son John Burdine, who assisted him in the business, over military roads built earlier in the century to Miami.

John Burdine brought with him a wagon load of clothing and other apparel for men.  He quickly sold out his inventory, prompting his father to decide on the Magic City as the new home of William Burdine and Son. In October 1898, the Burdine family moved to Miami, at which time the store began to operate in its new home on today’s South Miami Avenue near Flagler Street. Over time, Burdine’s became ‘The Florida Store’ with more than 50 stores throughout the Sunshine State before being subsumed by Macy’s in 2005. Sadly, the downtown Miami Macy’s, which stood across the street from the original Burdines, closed in 2017.

If Miami’s business community was sanguine over the presence of Camp Miami, the camp’s occupants experienced great disappointment.  Upon their arrival to the Magic City, these soldiers found a camp far from completion, with a sewage and waste system that left much to be desired.  Initially, the camp’s developers planned to flush waste matter into the nearby bay.  However, with an extensive portion of the camp far to the west of the bay, a series of half barrels were constructed with deleterious consequences for the camp’s sanitation network, and, ultimately, the health of the soldiers.

Exacerbating the camp’s problems was the proximity of North Miami, an unincorporated area just three blocks from the city’s northern border.  The quarter was rife with drinking, gambling and prostitution which proved enticing to soldiers, as it had to resident of the Magic City from its inception. 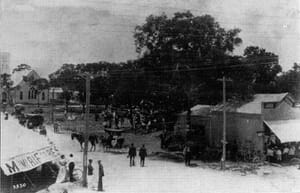 Many soldiers were forced to labor at the camp, especially in the western sector, clearing trees, palmettos, and stones.  Such forced service caused a steep decline in soldier morale.  Accordingly, the soldiers became indifferent to the impulse that had led them to enlist.  Shortages of provisions and equipment added to the misery of the soldiers. Men lived on sparse rations in the early days of the camp. Looming above everything else were growing doubts that the men of Camp Miami would ever see Cuba, since the war was decidedly one-sided in favor of the United State, thereby raising the possibility of a quick ending.

The impurity of the water supply would prove to be one of Camp Miami’s most intractable problems.  Three camp surgeons characterized the water supply as thoroughly contaminated, infected and too dangerous to utilize for drinking purposes.  Many soldiers succumbed to typhoid fever.  Others suffered from diarrhea, dysentery, and a low form of fever.

By mid-July, the Second Brigade, which consisted of the Second Texas, Second Louisiana, and Second Alabama regiments, reported about 350 men on sick call daily with fever and other illnesses. The sick received assistance with the opening of a hospital near the southern edge of the camp.  Shortages of building and hospital supplies, along with nurses and attendants, compromised its effectiveness and engendered criticism. 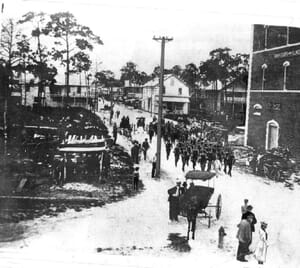 Figure 4: Minuteman marching on Avenue D after the war. Most likely 1901.

One disillusioned solder observed a city of glaring contrasts: “There was a most magnificent and gorgeously appointed hotel (the Royal Palm) right in the midst of a perfect paradise of tropical trees and bushes.  But one had to walk scarcely a quarter of a mile until one came to such a waste wilderness (the campsite) as can be conceived of only in rare nightmares.”

Miami, which prospered greatly from the short stay of the soldiers, chose to ignore, to a large degree, complaints about the camp and the discomforts of its occupants.  Even Henry Flagler weighed in on the matter.  A dissembling Flagler wired Secretary of War Russell Alger: “I understand that very unfavorable reports have reached you regarding the sanitary conditions, as well as, discomforts of the camp at Miami, Florida. If not wholly untrue they are grossly exaggerated, and I ask as a personal favor that you suspend adverse judgment (until all of the facts become known).”

However, conditions in Camp Miami continued to deteriorate as Miami’s summer weather worsened.  The final segment on Camp Miami will appear in our next article.