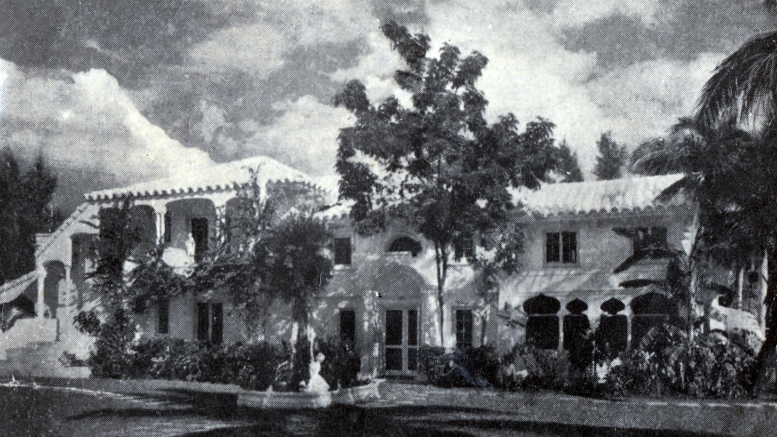 On land that was once part of Carl Fisher’s Miami property, there was a beautiful apartment building that stood on the east side of Brickell Avenue between Twelfth Terrace and Thirteenth Street. The property at 1299 Brickell Avenue was built long after Fisher moved to Miami Beach and was most likely erected in the early 1930s, but it could have been constructed earlier. The first listing in the Miami Directory did not show the address until the early 1930s. When the property first appeared in newspaper advertisements in 1934, it was described as a single-family home and touted the home’s proximity to downtown Miami to appeal to those who were seeking a short commute to work. One classified advertisement in the Miami Herald described the residence as a “Moorish home” having five bedrooms and three bathrooms. While the home may have had Moorish elements in parts of the home, the building took on more neo-classical Mediterranean features when it was reconfigured later.

The structure and purpose of the home changed when Dr. Fuad Hanna purchased the property in 1935. He expanded and reconfigured the residence to become a multi-family apartment building. Once the renovations were complete, the building consisted of six apartments, each having their own separate entrance. It was common that many of the original single-family large homes found on Brickell Avenue were converted into apartments during the early to middle-decades of the last century.

On the ground level and in the center of the building was the landlord’s unit. This apartment was a two-bedroom and two-bath large apartment with a main area, that served as both a living and dining room, while providing access to the bedrooms and bathrooms. The sunken living room was thirty square-feet in size and would require visitors to descend three steps to enter the great room. Although the sunken living room provided a unique feature to the apartment, it wasn’t always practical. Storm surge, which are common with hurricanes, would usher in more than a foot of water into the living room and throughout the apartment. Remediation of the flood water would normally require renting large pumps, which were generally in high demand following bad storms.

The other apartments in the building were either efficiencies or one-bedroom units. On the north side of the building was a cottage apartment that was accessible on the ground level in the backyard. It was separate from the main house and offered a detached entrance and walls independent of the other apartments. A renter would walk through a gate along a paved walkway to get to the cottage.

There were two other apartments located to the north of the landlord’s entrance. The second-floor unit was accessible from an arched-staircase leading to its own entrance. It was a one-bedroom unit and the unit below, on the ground level, was an efficiency. On the southern end of the building were two more apartment units. Like the northern portion of the building, there was an upstairs one-bedroom apartment accessible from its own arched staircase, and an efficiency apartment on the ground floor below it. Every apartment provided kitchenettes and their own bathroom.

The front lawn of the apartment building was beautifully landscaped and featured a unique and ornate fountain in the center of the property. When turned on, it would project water from a mermaid’s arm and from several frogs that were attached to the side of the fountain. The lawn was beautifully manicured and the royal poinciana and palm trees would cast a relaxing shadow across the front of the property.

The Hanna family resided and operated the rental business at 1299 Brickell for fourteen years. When Dr. Hanna later purchased two properties further north on Brickell Avenue, he sold the apartment building to Dr. Luis Rivera in 1949. From that point forward, advertisements in both the Herald and News, as well as listings in the city directory, referred to the property as the Rivera Apartments. Dr. Rivera traveled for business and the apartments were managed by his wife. Leslie Rivera fondly remembers growing up in this beautiful home located in a neighborhood that can best be described as quiescent during her childhood. She remembers a time when property in the neighborhood was still undeveloped and when one could walk down Brickell Avenue and have an unobstructed view of Biscayne Bay.

The Rivera’s owned the property until Dr. Rivera sold it to Dodd Realty in 1970. The real estate firm rented the landlord unit to the Rivera family until they decided to sell the property for development. In 1980, the land was sold, and the apartment building was razed to make room for a twenty-six-story office building. The 1221 Brickell building opened in 1984 and marked another step in the ongoing evolution of the area from a quiet neighborhood to a high-density residential and commercial urban corridor.