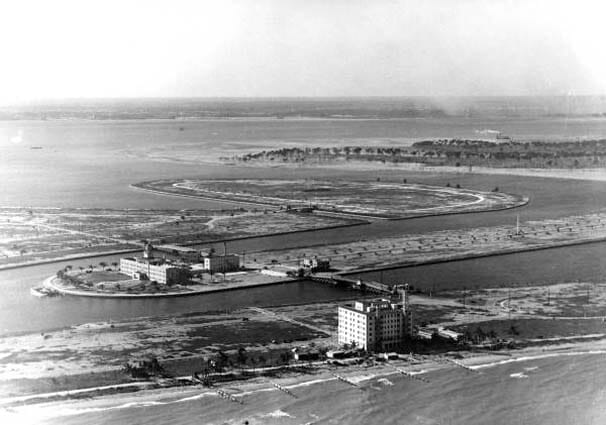 Following the closing of The Aquarium in April of 1923, James Allison still had plenty to keep him busy. While technically retired, Allison still operated Allison Engineering and ran the Indianapolis 500. He traveled frequently between Miami Beach and Indianapolis. 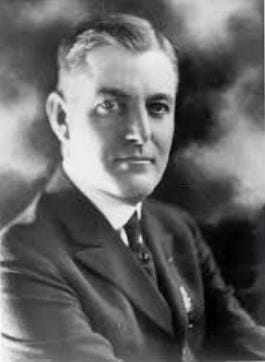 The stress of Allison’s approach toward “retirement” did not help improve his battle with bad health. Allison had his first heart attack at the age of 41 in the March of 1914. During a trip back from Florida to Indianapolis in 1921, Allison was hospitalized with bronchial pneumonia.

By the spring of 1923, Allison’s health was beginning to worsen. In August, he was hospitalized for sinus surgery which put further strain on his heart. He was anxious to get back to Florida in September and he was once again hospitalized in Fort Lauderdale for another heart attack.

Once Allison regained his strength, he reflected on his experiences and was very much affected by the white sterile and impersonal environment of the typical hospital. He was a very active person who enjoyed the outdoors and felt that hospitals hindered, rather than lifted, a patient’s road to recovery.

Allison approached Carl Fisher with an idea of creating a world class hospital that would cater to the wealthy who were building their winter homes in Miami Beach. At the beginning of 1924, if any Miami Beach resident needed a hospital, they would have to be taken over to the mainland. Allison’s next project was under way by the fall of 1924.

As soon as Fisher heard Allison’s idea, he thought that a world class hospital would be another draw to Miami Beach for the wealthy. J.C. Penny (Retail), James Snowden (a wealthy oilman), Clarence Busch (Busch Brewery), Harvey Firestone and Arthur Newby all had homes on Miami Beach by the beginning of 1925. This time period was one of Miami’s and Miami Beach’s many building booms.

Fisher was enthusiastically on board with the idea. He immediately donated eight and one half acres on the southern tip of a man-made island he called Allison Island. 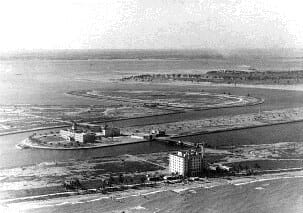 There were elevators that went to the roof to provide a view of the ocean. Also, part of the complex were a separate laundry and nurses residents. As the plans progressed, Allison’s vision expanded to include a world class health center. Carl Fisher was less enthusiastic about the expanding vision. Fisher was concerned that the health resort would not be self-sufficient financially.

While there were shortages of both supplies and labor in 1925, Allison Hospital was able to open on January 1st in 1926. The cost of the hospital was roughly $3.6 million. When it opened, there were fifteen patients and nine staff doctors.

Allison hired a French chef from the Waldorf Astoria in New York. It was so opulent, that all meals were served on fine china and the flatware was sterling silver.

Upon its opening, it developed a reputation as one of the finest hospitals in the world. However, just like The Aquarium, the timing of the opening of the hospital was terrible.

After the opening of Allison Hospital, the first of several events ended the building boom of the mid-1920s. Resources to support the building boom were already in high demand and short supply. On January 11th, 1926, the Prinz Valdemar, a large sailing ship, overturned at the turning basin of Biscayne Bay. The overturned vessel blocked the import of materials into the port that were needed to continue the building boom. Ironically, the Prinz Valdemar was later lifted out of the bay and placed on land in downtown Miami to be retrofit into a tourist attraction that featured an aquarium. This would have been Miami’s first aquarium since the closing of Allison’s Aquarium on Miami Beach.

The blockage of the port led to a shortage of materials and an increase in the cost of construction. This led to higher prices and the end of real estate speculation. The rapid growth period of Miami and Miami Beach was winding down.

To further complicate matters, a massive hurricane in September of 1926 shut down what was left of a thriving economy in South Florida. Many believe that the damage done by this hurricane, and a subsequent hurricane on October 20th of 1926, represented the beginning of the great depression for South Floridians.

Given the changing circumstances, it didn’t take long for Allison to realize that the economics of his vision were not practical. He approached a sanitarium to take over the hospital. When negotiations failed, his Florida bookkeeper, Joe Lazry, suggested he speak to the priest of St. Patricks Church, William Barry.

Father Barry had suggested that Allison speak with the Sisters of St Francis in Allegany, New York. They had experience running hospitals in the north. Allison spoke with the sisters, but following their discussion he had held out hope to run the luxury hospital himself. 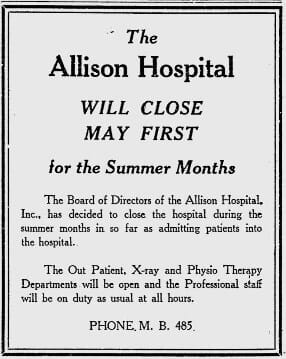 As 1927 progressed, financial considerations forced Allison to shut down the hospital during the summer. An ad in the Miami News in the spring of 1927 announced the closing of the hospital on May 1st for the summer months.

At the same time, Allison’s health began to deteriorate further. By the summer and fall of 1927, he was confined to a wheel chair and was using narcotics for pain. Reluctantly, in October of 1927, Allison signed a contract with the sisters to run the hospital.

Allison immediately regretted the decision. The sisters put in cost controls, including the use of paper napkins and the firing of five landscape gardeners. There was continuing conflict between Allison and the sisters. Allison decided he was not going to renew the contract with the sisters, but prior to the end of the initial term of the contract, Allison passed away.

James Allison had decided to divorce his wife in April of 1928. Allison had gotten involved with his secretary, Lucille Mussett, and decided he needed to make a big change. On July 31st in 1928, James and married Lucille in a small ceremony at Carl Fisher’s home at Montauk Point.

The next day James caught a cold. As he and Lucille began their honeymoon, his cold had gotten much worse and he decided to head back to Indianapolis. He began to get progressively worse and his illness developed into pneumonia. Within a few days of getting married, James Allison died on August 3rd, 1928 at the age of 56. 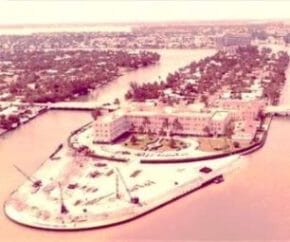 St Francis Hospital in the 1950s

Given the untimely death of James Allison, the fate of Allison Hospital was left in the hands of the sisters of St. Francis. The sisters purchased the hospital for $250,000 on March 30th in 1929.

The sisters ran the hospital from 1929 until the sale of the property in 1992 to a developer. Considering what the sisters had paid for the hospital, the land was getting too valuable to continue to use as the location of an aging hospital. The eight and half acres of waterfront land sold for $12 million.

Just like many historic structures on Miami Beach, the value of the land exceeded the utility of the building that resided on that land. Miami Beach was to lose another historic landmark in the name of progress.

A few years after the sale of the land, the August Geiger designed hospital building was demolished. The land was ultimately purchased by a real estate company called Dacra. The CEO of Dacra, Craig Robbins, had coveted the water-front land for a number of years.

Years after the land was cleared, Dacra built a set of mid-rise buildings for town homes based on a design known as New Urbanism. The development is called Aqua. The project was started in 2001 and completed in 2003. Ironically, Robbins was born in the hospital that resided on the eight and a half acres of land where Aqua resides today.

Incorporation of Miami Beach in 1915