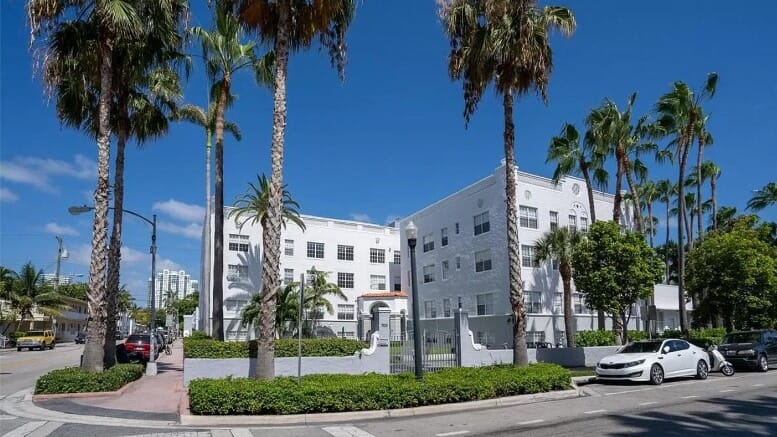 On June 15, 2022, the South Florida local news stations led their evening broadcast with a story about a building on Miami Beach that had to be evacuated due to a partial roof collapse. Given the tragedy of the building collapse in Surfside a year earlier, it was good news that no one was injured due to the roof crisis. The building, known as the An-Nell Apartments at 700 Euclid Avenue, had to be completely evacuated out of caution and to provide the building owner the opportunity to address the structural issues that led to the collapse. While no one was hurt, residents were inconvenienced and left finding temporary housing while the building is repaired and stabilized.

The An-Nell Hotel, as it was originally known, was constructed in 1935 and is listed as a contributing structure to the Miami Beach Architectural District, a national historic district known for possessing the largest collection of Art Deco buildings in the world. The term ‘Art Deco’ is a blanket designation covering deigns such as “Streamline”, “Tropical”, and “Med Deco”.

After being relieved hearing that no one was physically harmed due to the roof collapse, this news story triggered curiosity about the history of the building. This is the story of the An-Nell Hotel at 700 Euclid Avenue and its 87-year history on Miami Beach. 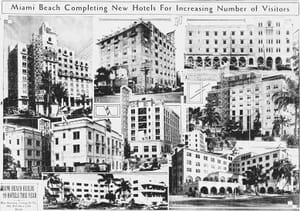 The An-Nell Hotel may have begun with the sale of a neighboring hostelry when the Martha Washington Investment Corporation, headed by Anna Winter Adams, sold the Roselle Hotel, located at 633 Euclid Avenue, to the Kars family for $35,000 in June of 1934.

The investment company took the proceeds of that sale and purchased, in March of 1935, a half interest in property to the north of the Roselle Hotel, on the northeast corner of Euclid Avenue and Seventh Street, or lots 6, 7, and 8 in block 59 of the Ocean Beach Addition subdivision. The other half interest was owned by Adolph and Nelly Arky which established a partnership between the Adams and Arky families.

On April 30, 1935, Anna Winter Adams filed for a building permit to construct a 74-room hotel at 700 Euclid Avenue for $95,000. The permit indicated that Henry Hohauser would be the architect and that L&H Miller would be the construction firm. Ultimately, this project led to the construction of the An-Nell Hotel, which was one of nineteen inns constructed on Miami Beach in 1935, allowing the beach to offer tourists an additional 1,306 rooms of new accommodations during that year.

Despite Hohauser’s designs primarily adhering to the Streamline Moderne, or Art Deco, the An-Nell, along with the Edison Hotel, were described as Mediterranean Revival. The An-Nell was designed as a three-story, concrete block stucco structure with a flat roof, features consistent with the earlier design trend of the 1920s and early 1930s.

The ‘An-Nell’ moniker appears to have been a combination of the first names of the women associated with the new hostelry. Combining Anna (Mrs. Adams), with Nelly (Mrs. Arky), would provide for the portmanteau of “An-Nell” as a potential explanation for the origins of the brand name of the hotel. Although there is no evidence to confirm this theory, it does seem to make sense. 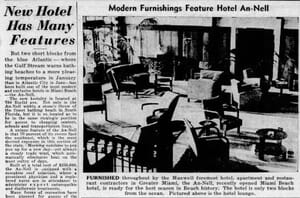 When the An-Nell Hotel opened on December 1, 1935, it was described by a writer in the Miami Tribune as “but two short blocks from the blue Atlantic, where the Gulf Stream warms bathing beaches to a more pleasing temperature in January than in Atlantic City in June.” A unique feature of the An-Nell was that 70 percent of its rooms face the southeast, which the writer went on to describe as “the most desired exposure in this section of the state.” The establishment accentuated the morning sunshine, combined with a steady trade wind, created one of the most desirable buildings not located right on the ocean.

More than double the original estimate when the permit was filed, the final total cost of the hotel was $250,000, which included a complete roof-top solarium, staffed with a physician and nurse to administer expert naturopathic and diathermic treatments. The hotel was described as possessing 74 rooms and included an outdoor dining room on the ground level, which was operated by Mrs. Olive H. Prill when the hotel opened in 1935.

The establishment ensured that they offered guests a first-class experience and plenty of entertainment. Each winter the hotel organized bridge parties, musical programs, and dances. Unlike some hotels in South Florida, the An-Nell stayed open during the summers and advertised air-conditioned rooms as early as 1937. 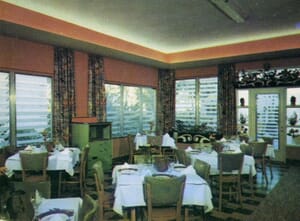 Initially, the property and hotel were managed by Adolph Arky, but that changed in July of 1938 when the hotel operation was leased to William B. Shopiro and Samuel Albaum on a five-year lease for a total of $122,500 ($24,500 per year). At the time this lease was signed, the Miami Herald described the hotel as: “The three-story Annell Hotel has 84 rooms and a penthouse apartment, besides recreation rooms, spacious walled grounds, patio, outer dance area and gardens.”

Apparently, the hotel gained 10 rooms between its opening in December of 1935 and the time it was leased to Shopiro and Albaum. However, the first record of the hotel adding an addition to the complex was not until 1947, ten years after the lease was signed.

Two years later, the Arkys sold the An-Nell Hotel building and property to the Josand Corporation for $110,000. As part of the announcement in the Miami Herald, the hotel and land were described as: “The property, which includes three lots, has 150-foot frontage on Euclid Avenue and a depth of 140 feet. The hotel has 78 rooms, a dining room and kitchen.”

It may be a disparity in reporting, but once again the hotel’s room count was different in the 1940 announcement than two years earlier when the hotel was leased. Although the solarium was not mentioned in the reporting of either transaction, it was still in operation on the rooftop of the An-Nell Hotel through the 1940s. 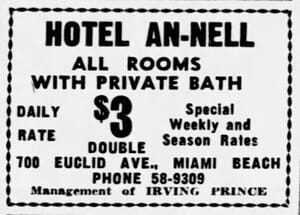 On May 13, 1942, it was announced that the An-Nell Hotel would be one of nine hotels leased by the Army Air Corp to bring the total to 80 hotels and apartment buildings taken over by the army to provide barracks, training centers, and mess halls for the enlistees that were trained on Miami Beach during World War II. Just as the Navy took over downtown Miami for training, the Army Air Corp took over Miami Beach.

Although the An-Nell was part of the allotment of establishments leased by the Army, it was only partially taken over during this time. The local newspapers would still carry advertisements indicating that there were rooms available to rent in the hotel during the time it was leased by the Army Air Corp. A visitor could rent a room for the low rate of $3 per night in 1943.

On September 12, 1943, Irving and Betty Prince took over the lease for the An-Nell at a rate of $20,000 per year. Given the guarantees by the Army Air Corp, leasing and managing the hotel got more valuable during the 1940s. The hotel was turned back over to the private sector in the mid-1940s near the conclusion of World War II. 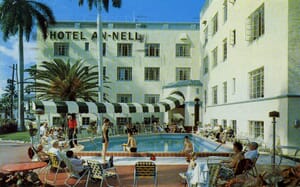 Although there is no documentation of when a pool was installed in the front courtyard of the property, it may have been shortly after the war ended based on postcards dated from the late 1940s to early 1950s. In 1947, an extension to the main building was added onto the north end of the property which became the dining room for the hotel. The blueprint of the addition was drafted by A.E. Ebram as an Art Deco annex to the Mediterranean Revival existing structure.

In 1951, there were other additions added to the building on the northwest corner which were designed by architect Norman J. Dignum. Throughout the early 1950s, there were other modifications made to the hotel including the removal of two balconies which faced Seventh Street on the eastern side of the building.

In November of 1964, the An-Nell was sold to Robert Jacobs for $265,000. He would retain ownership of the establishment for the next fifteen years until the late 1970s when his sale of the building would lead to the property being turned over eight more times over the course of the next four decades. 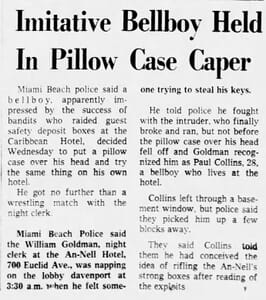 Hotels on Miami Beach have a long history of issues with burglary. In the mid-1960s, there was a story of bandits who successfully raided the safety deposit boxes at the Caribbean Hotel at 3737 Collins Avenue, which inspired an employee of the An-Nell Hotel to attempt the same crime.

On February 20, 1968, at 3:30am, Paul Collins, who was a bell boy and resident of the An-Nell, broke a basement window and put a pillow case over his head to disguise his identity. He broke the basement window to make it seem like the intruder broke into the building. He then snuck up on William Goldman, the night manager who was sleeping in the lobby at the time, to steel the key to the room where the strong boxes were kept. He also attempted to acquire the master key to the safety boxes as well.

However, when Collins tried to clandestinely take the keys from the night clerk’s belt, he woke him up leading to a wrestling match that the would-be thief lost. As he escaped from the confrontation and ran out of the hotel lobby, the pillow case covering the intruder’s face fell off allowing the night clerk to recognize him and report his identity to the police.

Not knowing that he had been identified, Collins walked back into the hotel to return to his room when the police stopped and arrested him. For the 28-year-old aspiring thief, Paul Collins learned the hard way that copy-cat crimes do not always turn out in favor of the thief. He was charged with aggravated assault and thrown in the county jail. 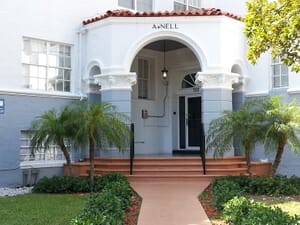 After fifteen years of ownership, Robert Jacobs sold the hotel to Mett Company, whose president was Melvin Safra, for $400,000 in September of 1979. In turn, Mett Co sold the establishment for $640,000 in November of 1987 to Garland Restoration Limited, whose general partner was Aliant of Florida, headed by Pat Hickman. Garland held the property for less than two years when they sold the hotel to An-Nell Property Inc for $650,000 in April of 1989.

It was An-Nell Property that converted the hotel into apartments in 1989, and renamed the establishment the An-Nell Apartments. Over the course of eleven years, from 2010 to 2021, ownership of the property and building changed hands five more times:

The last transaction was part of a portfolio sale of apartment buildings for a total of $97 million demonstrating how quickly real estate can appreciate in value in South Florida.

As residents wait for repairs and structural reinforcement work to be completed, it is natural to question the viability of a building that is 85 plus years old. While having historic preservation protection on both the national (Miami Beach Architectural District), and local (Flamingo Park Historic District), levels afford the building some level of protection from demolition, the safety concerns of the overall structure of the An-Nell will certainly be given adequate attention while work proceeds to fix the building.

Those of us who appreciate what the historic district on Miami Beach means for the area, tourism, and its history can only hope that repairs and reinforcement will set the building on a path for many more decades along Euclid Avenue. While South Florida has a lot of history packed into a relatively short span of time, it doesn’t have many historic structures standing to remind us of its history. The historic district on Miami Beach is one to be cherished and protected for as long as possible. Let’s hope that the buildings that comprise the district get the proper maintenance and attention they deserve.