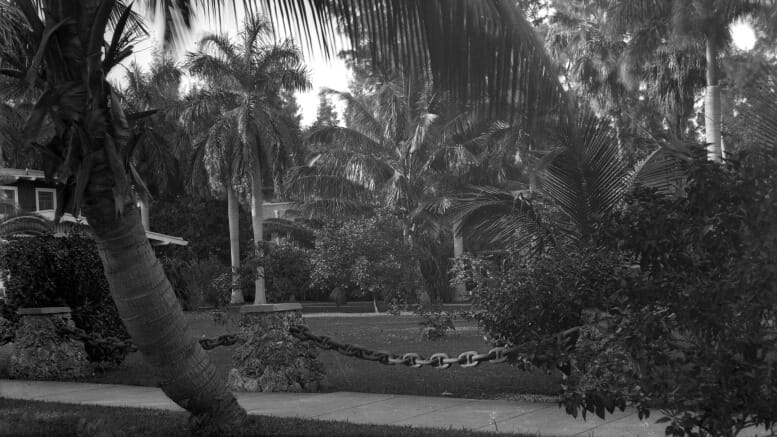 One of the Southside neighborhood’s most popular tourist attractions was an anchor chain fence along Brickell Avenue and SE Fourteenth Street. This fence caught the attention of sightseers and tourists during its time enveloping the Brickell Avenue corner from 1917 until 1965.

To add mystery to an already intriguing artifact, many residents freely shared the tale of the origin of the anchor chain, which turned out to be urban legend. Even those who rented and purchased the home payed homage to a false narrative for more than three decades. While the fence was a unique and ornate feature of the area, it was not the chain from the USS Maine. 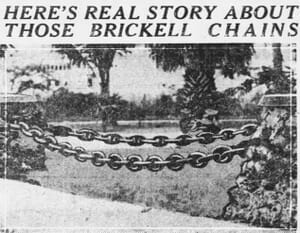 When a four-masted American schooner grounded off the village of Planter, located in the Florida Keys, in the early 1900s, Charles Cook and others were there to salvage as much of the sailing vessel as possible before it sank. Planter became part of Tavernier in 1911.

Cook and his cohorts stripped the schooner of as much as they could before it was too late. They brought back the rigging, donkey boilers, the anchor and chain to a boat yard located in Miami. Most of the salvage was sold to Charley Diamond of the Van Steamship Company, but the anchor chain stayed with Cook in Miami until he sold it to William Huffstetler in 1910, who later sold it to Dale Miller a few years later.

Miller was a general contractor who built homes in the greater Miami area. It was his intent to use the chain as part of a construction project to be determined later. He finally found the right property and right buyer when he was hired by Emily J. Clark to build her winter residence at the corner of Brickell Avenue and SE 14th Street in the neighborhood that was once referred to as Southside. We now refer to this quarter as Brickell. 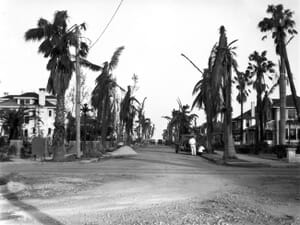 Emily and Melvin Clark were prominent citizens of Grand Rapids, Michigan, who were involved in businesses and philanthropic endeavors in their hometown. Melvin built his fortune in lumber, among other commercial investments, which provided the couple and their three adopted children a very comfortable life in western Michigan.

The Clark’s philanthropy included donating their first home on Sherman Street to become the M.J. Clark Memorial Home which cared for the elderly, and donating money to build the first schoolhouse at Starr Commonwealth in Albion, Michigan, which was later dedicated to Emily Clark. In addition, the family matriarch was actively involved with the D.A. Blodgett Home for Children and was an avid art enthusiast and collector. Emily purchased a residence on Fulton Street and donated it to the Grand Rapids Art Museum to house the institution’s art collection.

When Melvin passed away in 1909, Emily was 64 years old and was ready to escape the harsh winters of Michigan. She started traveling to Miami in 1913 and grew so fond of the region that she purchased two lots in March of 1917 which would become the location of her winter residence at 1329 Brickell Avenue.

Emily hired Dale Miller to construct the home in 1917 at which time she purchased the anchor chain to be used for a perimeter fence. The chain was comprised of links eleven and one-half inches long with each link weighing 31 pounds. The links were connected by oolitic limestone posts along both Brickell Avenue and SE 14th Street which provided an ornate and unique artifact in the heart of the prestigious neighborhood. Construction on both the home and fence began in the spring of 1917.

While the home and fence were being constructed, the United States entered World War I, which impacted the completion of the fence. Given the scarcity and need for iron, there was concern that the federal government may ask for the chain to support the war effort. Despite construction of the home being completed prior to the end of 1917 and Emily moving into in the home that winter season, construction of the fence was put on hold until the end of the war in November of 1918.

As soon as the chain fence was completed, it became a sightseeing stop for residents as well as tourists. Crowds of curiosity seekers traveled to the Southside neighborhood to see the ornamental chain fence on this prominent corner of Brickell Avenue. Fascination with this fence led to speculation on the origins of the anchor chain. It didn’t take long for an urban legend to be born.

Myth of the USS Maine 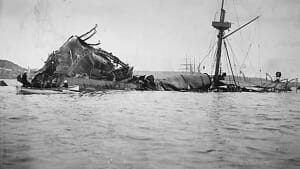 By the mid-1930s, many in Miami were resolute that the anchor chain used to construct the fence came from the USS Maine, which sunk in the Havana Harbor on February 15, 1898. The exact cause of the explosion that led to the sinking of the ship, which precipitated American entrance into a war with Spain, referred to as the Spanish American War, was never clear. At the time, the United States government believed that the ship was sunk due to an explosion caused by a floating mine, but a Discovery Channel Unsolved History investigation in 2008 concluded the explosion was caused by a fire started in a coal bunker on the ship which spread and came into contact with a gun powder storage bulkhead causing the detonation of the explosion. There is still debate on what exactly caused the explosion on the USS Maine on that fateful day in 1898.

According to urban legend, the anchor was retrieved from wreckage and sold to a salvager in Miami, who in turn sold it to the owner of the home built within the confines of the fence. This folk tale was repeated for three decades until Daly Highleyman, son of the developer of the Point View subdivision in Brickell, Locke T. Highleyman, offered a new theory in the mid-1960s.

In November of 1967, the Miami Herald published an article entitled the “The Decline and Fall of Millionaire’s Row”, detailing many of the stories of the old Brickell neighborhood including that of the anchor chain fence. After reading the article, Daly Highleyman wrote to Nixon Smiley, a Miami Herald staff reporter, and explained that the anchor chain did not come from the USS Maine and that it was his father, Locke, who purchased and installed the anchor chain fence prior to World War I. He said that his father bought it from a man who salvaged it from a ship which “piled up on a reef just off of Miami”.

While Daly Highleyman’s account of the origins of the chain were closer to reality than the USS Maine myth, it wasn’t Locke Highleyman who installed the fence, but was Dale Miller who performed the work on behalf of Emily Clark. However, the timing of the fence being constructed before World War I was mostly true.

Fate of the Anchor Chain 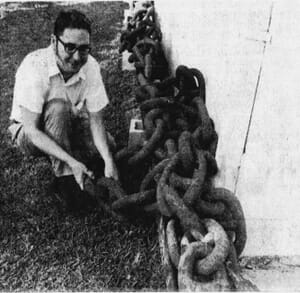 Figure 4: Anchor Chain at Historical Museum of Southern Florida in 1971

The Clark family owned the property at 1329 Brickell Avenue from the time it was constructed in 1917 until the mid-1930s. Emily Clark passed away on August 13, 1929, and her daughter, Marguerite Wurzburg, inherited the property after her mother’s passing.

The residence stood at the corner of Brickell Avenue and SE 14th Street until 1965, when it was razed, and the fence was taken down. The chain for the fence was donated to the Historical Museum of Southern Florida, which is now HistoryMiami. The museum incorporated the chain into one of their displays after receiving the donation but put it into storage once the museum relocated from its location near Vizcaya to its current site at the Cultural Center in downtown Miami on April 14, 1984.

The block that once included the home with the anchor chain fence is now the location of the Brickell Arch building, a 36-story tower that includes class A office space, residential 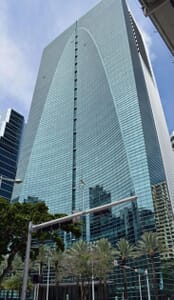 condominiums and the Conrad Hotel. The building opened on July 1, 2004 and became the North American headquarters for the Espirito Santo Bank.

The Brickell Arch features a concave parabola design on its front glass façade in an attempt to mimic the Gateway Arch in Saint Louis, Missouri. One of Miami’s nicknames is the “Gateway to Latin America” and the Brickell Arch is said to serve as a symbol to welcome people to the United States as the Saint Louis Gateway Arch greets people to the west.

Just as the Brickell Arch acts as a symbol to attract and welcome new visitors to the neighborhood’s financial district, the anchor chain fence served as an attraction to the Southside quarter for so many curious about its story. The fence served as a reminder of Miami’s rustic past, while the parabola glass arch provides a modern symbol of how the neighborhood and the city has evolved since the nautical enclosure was removed in 1965.