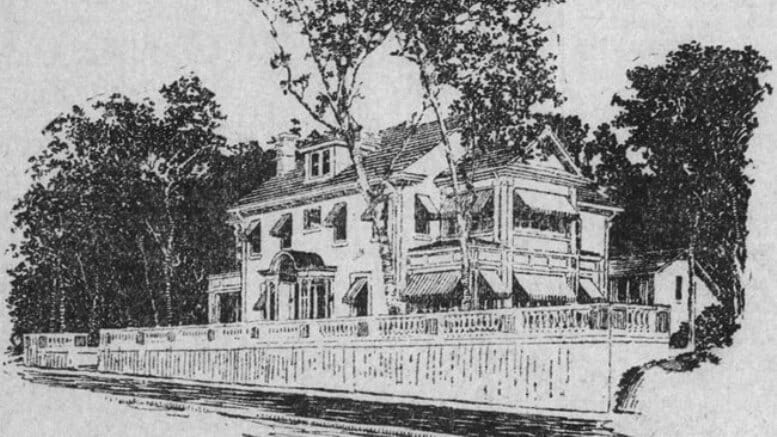 When demolition of the eleven-story condominium at the end of southeast twenty fifth road commenced, it reminded me of the fine residences that once sat atop the ridge along the east of Brickell Avenue. While some look at a demolition site and wonder what will go up next, the historian in me always wonders what was once there. This is the story of the plot of land that was once the fine upscale residence of a Miami pioneer. 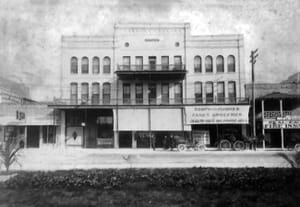 Originally from Camden, Arkansas, George Romfh moved to Altoona, Florida in 1884 to find his calling in life. It would be more than a decade later that he found his calling in a place that offered boundless opportunity for a hardworking young man. When word got out that Henry Flagler announced he would extend his railroad to the southeast corner of the state, George did not hesitate to take a chance on what would become the City of Miami.

Romfh arrived in Miami in 1896, the same year that Flagler’s railroad would arrive, his hotel would be constructed, and the municipality would incorporate as the City of Miami. When George disembarked onto the bank of the Miami River, he found little in the way of modern civilization. The development of the region had just begun and was little more than a few wood-framed buildings and a couple of dirt roads when he arrived. However, George was resilient and found employment with the L.C. Oliver Lumber Company. It was a job that provided him with the chance to figure out how he can make a name for himself in a promising new city.

While it did take a few years to find his calling, George co-founded and opened a grocery store called ‘Romfh & Hughes’. The firm opened on August 2, 1906, in the Finlay Building, which was constructed just a year prior to the grocery store hanging their shingle. The building still stands today at Nine East Flagler Street and was better known as the downtown location of McCrory’s Five and Dime store. Today, it is the home of the Flagler Jewelry Center.

Despite their being plenty of grocery stores in the young city of Miami, Romfh and Hughes was profitable and growing. However, just two years after it opened, it was acquired by the Miami Grocery Store in August of 1908. The acquiring company was one of the first grocery stores in Miami when they began operations in 1896. The consolidation of the two firms meant that George’s time in the grocery business would come to an end soon.

A few years after the merger, he joined his brother Edward C. Romfh at First National Bank. After learning the business, George was promoted to Vice President at the bank, and became an integral part of the operation of one of Miami’s pioneer financial institutions. By the early 1920s, George purchased property to construct his family residence in a new subdivision called Brickell Hammock.

In an article in the Miami Herald entitled “Brickell Hammock to Realize Dream of Miami’s Revered First Citizen”, Mary Brickell laid out her vision for a lush and largely undeveloped section of their vast real estate holdings. Brickell Hammock was a tract of 400 to 500 acres of dense hammock land residing adjacent to the shoreline of Biscayne Bay. The subdivision was bordered by SE Fifteenth Road to the north, Vizcaya to the south, Biscayne Bay to the east, and NW Fifth Avenue to the west.

When Mary was asked why this land had remained undeveloped up until 1921, she responded:

“Many times in the past I have been urged to sell this tract to sub-dividers, but have not cared to part with it for a number of reasons. The average real operator has but one object in view: to develop the land to be subdivided as cheaply as possible, to get it off his hands to the buyers quickly at an inflated value, and reap an exorbitant profit. But I have always had a vision of a subdivision deluxe for Brickell Hammock; a dream if you please, that when the time was ripe, and when Miami had grown to an extent that would warrant it, I would subdivide it, putting in only the highest class of improvements and safeguard it with the most rigid restrictions, so that it would be the best residential district in a city of handsome homes and one of the beauty spots of what is known everywhere as ‘The Garden Spot of the World.’

The announcement of Brickell Hammock was published on December 4, 1921, and included an introduction to the Gresham Manufacturing Company, a firm that the Brickell’s partnered with to help develop the new subdivision. The Gresham organization owned lumber mills and construction equipment, and Mary trusted them to execute on her vision for Brickell Hammock.

Unfortunately, Mary died on January 13, 1922, prior to the approval of the plans for the subdivision. William and Maude, co-executors on Mary’s estate, facilitated the approval and honored the partnership with Gresham Manufacturing to develop part of Brickell Estates. The first section of the subdivision that was made available for sale was along SE Twenty Fifth Road, from Brickell Avenue to Biscayne Bay. After all the formalities were resolved, lots were marketed for sale to the public. 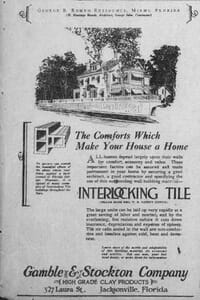 On March 29, 1922, George Romfh was the first to purchase a lot from Gresham Manufacturing. Given his timing, he chose one of the most desirable parcels on Twenty Fifth Road. The plot of land closest to the shoreline of Biscayne Bay was the largest lot on the street with dimensions of 100 feet by 140 feet.

Romfh did not waste any time getting started with the construction of his family residence. He hired architect Harold Hastings (H.H.) Mundy to design and oversee construction of his two-story, ten-room mansion, consisting of four bedrooms and four bathrooms. The residence was constructed with hollow tile and featured a green tile roof. In an article in the Miami Herald on November 20, 1922, it was announced that the home was nearing completion and was described as “one of the handsomest residences in the city.”

The Romfh’s enjoyed living in the Brickell Hammock subdivision and the family became an integral part of the neighborhood’s social scene. They would often host parties and events in their spacious home. Both George and his wife, Lucia, were involved in civic and social organizations in Miami, which often kept the couple very busy attending local events and parties.

While attending a wedding reception at the Indian Creek Country Club on Saturday evening, October 16, 1943, George suffered a stroke requiring him to be rushed to Jackson Memorial. Sadly, he died the next morning at the hospital. He was 68 years old, leaving his wife and two adult sons, who were both serving in the military overseas when they got news of their father’s passing. The death of George Romfh was a shock to his family and friends. It also left his wife all alone to mourn her husband’s death in a house much bigger than she cared to manage. After her work as executrix of George’s will was completed, Lucia listed the residence for sale.

Residence as a Rooming House 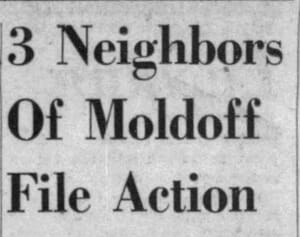 Less than a year after George’s passing, Lucia Romfh sold the family residence to Thomas E. Maddock of Chicago for $20,000 cash on April 3, 1944. Within two years of owning the mansion, in June of 1945, Maddock sold the mansion to David Moldoff, who said he was purchasing the home to give it to his son when he returned from serving in the military overseas.

However, once Moldoff took possession of the residence, he began operating it as a makeshift hotel. In January of 1947, three of his neighbors filed an injunction to stop him from operating the residence as a flop house. An article in the Miami Herald described the residence as an “18-room home”, which indicates that Moldoff may have reconfigured the home to accommodate as many tenants as possible. It was described as a ten-room residence when it was built in 1922.

Moldoff, who did not live at the home, said he was providing a temporary rooming house for returning veterans. However, the three plaintiffs interviewed some of the residents and discovered that there were only five military veterans living in the house at the time of they filed the lawsuit. 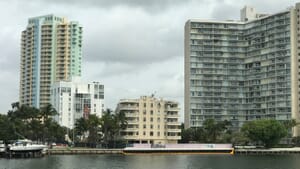 By the late 1960s to early 1970s, many of the fine residences along Brickell Avenue were being replaced with mid-rise apartment buildings. The Romfh mansion was one of those homes. In 1971, it was announced that an eleven story, 61-unit, apartment building was going to be constructed on the former site of the Romfh residence. Benjamin Tepper and Joe Katz, the two men who owned the property and financed the construction project, hired David Kaplan to design the building. The new complex featured a swimming pool and onsite parking in a two-level garage located on the property. The building offered a mix of one, two and three-bedroom apartments as part of its 61-unit configuration.

In December of 1978, the apartment building was converted into a condominium complex. The building was sold by Tepper and Katz for $2,950,000 to a corporation named 25 Bay Tower, a firm headed by Jerry Gross and Laurance Mendelsohn. Following the conversion, the building was named “Twenty Five Bay Tower” and stood on the property until May of 2020, when its new owners razed the building in preparation for construction of a much larger condominium tower. 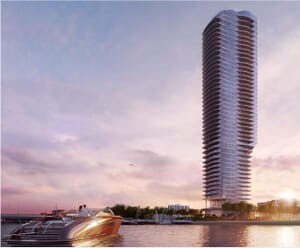 By 2015, Miami was rapidly transforming into the Manhattan of the south. Single family residences were being purchased at a frenetic pace and were replaced with high-rise condominium towers. As land for development became more difficult to find, Vladislav Doronin of the OKO Group approached the condo association for Twenty Five Bay Tower in 2015 to determine interest in bulk buyout of every unit in the building. After negotiations and offers were extended, the OKO Group successfully purchased every unit in the building for a generous premium over market value.

One of the owners of a three-bedroom, two bath unit sold his apartment for $1.1 million. He and his wife purchased the apartment just six months earlier for $500,000. In total, Doronin purchased all 61-units in the building for $48 million. Demolition of the eleven-story tower began in April of 2020 and still continues as of the publication date of this article.

Doronin and Jonathon Goldstein are the principal partners of the project that will replace the Twenty Five Bay Tower. The pair have contracted with the investment group Cain International to finance the construction of a 47-story luxury condominium tower called UNA Residences. The group hired international architectural firm Adrian Smith + Gordon Gill Architecture to design both the interior and exterior of the building.

The tower will hold 135 residences, each with a private elevator entry, ranging in size from 1,100 to 4,786 square feet. The interior of each apartment will feature wood, stone, and leather finishing, along with floor to ceiling windows. Prices for the units will range from $900,000 to more than $5 million, depending on the view, floor, and size of the apartment. While the market seems saturated with available luxury condominium units today, Doronin and Goldstein are confident that their property is unique and will be in high demand once they begin listing units for sale.