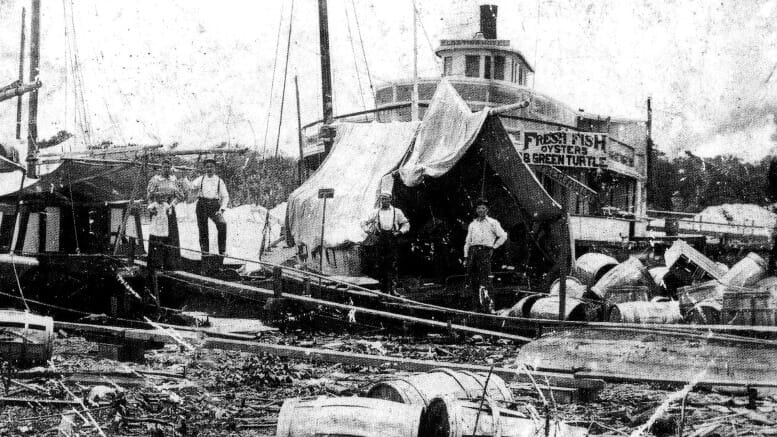 Captain Edward E. Vail was more than just a Miami pioneer. His experiences on the sea and as an entrepreneur provided him with several lifetimes of fascinating stories. He was considered one of the more interesting raconteurs in early Miami. Through adversity and independent living, Captain Vail could capture an audience’s attention with tales of the road, or waterway, less traveled.

While the captain may best be remembered for providing the largest hostelry in early Miami, his entrepreneurial spirit and larger than life personality was his true legacy. His floating hotel may not have provided the luxurious accommodations that tourists expect when they travel to South Florida today, it was an important place for early pioneers to lay their head after an arduous day of clearing land and building what would become the Magic City.

He was born on August 10, 1836, in Litchfield, Massachusetts. After school he pursued his dream of sailing the open waters. Once he became a sailor, Vail joined the Cromwell Steamship Company in the early 1860s around the beginning of the Civil War.

He developed his leadership skills and was given command as Commodore Captain of the Steamship Washington during the last couple of years of the Civil War. His ship was primarily responsible for patrolling the blockade to ensure supplies could not reach the Confederate Army.

Captain Vail continued his career in the navy until 1868. At that time, he decided he was ready for something different and chose Florida as the place he would find his second career. He began his next venture when he purchased one of the largest hotels in the state in 1869. 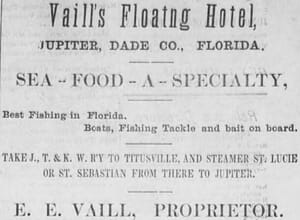 Shortly after retiring from the navy, Captain Edward Vail purchased the Saint Augustine Hotel for $130,000. Given the composition of the wood-frame building, he was required to purchase an insurance policy which charged him 3.5% of the value of the building.

The Saint Augustine Hotel became one the most popular tourist attractions in the state during the time that Captain Vail ran it. He successfully operated the hotel for sixteen years when his insurance company decided to raise his rate to 4.5% of the building’s value in 1885. Whether is was a question of economics or principle, Edward decided not to renew his policy.

As luck would have it, within a couple of days of discontinuing his insurance policy, the Saint Augustine Hotel burned to the ground. Those who witnessed the fire were amazed that Edward stood by stoically, while smoking a cigar, and watched the hotel burn to the ground. He then had to find a way to come up with the money to rebuild the hotel.

Henry Flagler arrived in Saint Augustine shortly before the fire destroyed Vail’s hotel. Hearing of the unfortunate circumstances, Flagler offered to lend the captain enough money to rebuild his hostelry. Vail accepted the offer and rebuilt the hotel with the understanding that the business would revert to Flagler if he defaulted on the loan.

After operating the hotel for a couple of years, Captain Vail could not afford to pay back the note and turned the operation over to Flagler. The captain knew he needed to find a different business model that catered to his strengths. An opportunity presented itself to Vail shortly after walking away from the Saint Augustine Hotel. 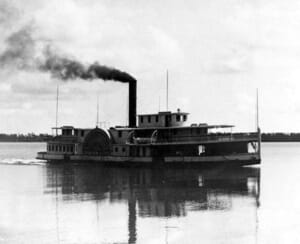 Captain Vail finally found the right opportunity when he purchased the Rockledge Steamship from Captain Richard P. Paddison in 1888. He converted the steamship into a floating hotel that could accommodate up to fifty guests. The ship had a kitchen that served food for visitors in addition to providing sleeping quarters. The floating hotel concept allowed Vail to easily move his business as the Florida East Coast extended to its next location.

He first docked the converted steamship in Rockledge, then onto Indian Creek in Jupiter, and later to Lake Worth in anticipation of the development of Palm Beach in 1893. His philosophy was to arrive at Flagler’s next stop prior the arrival of the FEC’s “iron horse”.

After the announcement that Flagler planned to extend his railway south of Palm Beach, Captain Vail prepared to move his floating hotel to the Miami River. He arrived on March 3, 1896 and docked at the foot of Avenue D (today’s South Miami Avenue), to provide housing for the throngs of people arriving to help build what would later be incorporated as the City of Miami. 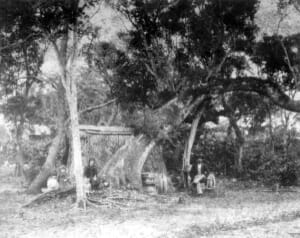 It was a good thing he arrived when he did because there were very few accommodations for the men and women who arrived ahead of the railroad. Julia Tuttle’s Hotel Miami was still under construction and there wasn’t much in the way of available housing for the number of people relocating to the north bank of the Miami River. When pioneers John and Everest Sewell arrived in the afternoon of March 3rd, both men booked a room and spent their first night in Miami in Captain Vail’s establishment.

Vail’s floating hotel became the largest “hotel” in the area until the Royal Palm Hotel and Hotel Miami were completed. However, it wasn’t large enough to accommodate all the area’s new residents. Those who did not book their room on the floating hotel were left with shelter in temporary shacks or tents in the nearby woods. The others who were lucky enough to get a room in Vail’s hotel were treated to fresh seafood caught in the river or nearby bay. The hotel advertised that they served fresh seafood that was caught daily.

End of the Floating Hotel 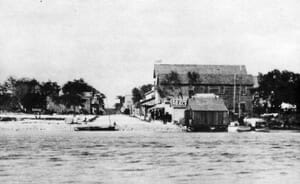 After the City of Miami was incorporated and other hotels were built, there wasn’t a lot of need for the floating hotel. However, it remained docked near Avenue D until roughly about the time of Captain Edward Vail’s death in 1904 at the age of sixty-eight. He purchased a home in Staten Island, New York, just a few years prior to his death in order to rest due to his failing health.

An article in the Miami Metropolis regarding Vail’s death stated that his hotel was dismantled and most of it was sunk in the Miami River by 1904. The only item remaining from the Rockledge was the hull of the ship which was lying at the foot of Avenue D at the time his obituary was published.

While Captain Edward Vail did not spend a lot of time in Miami, he was fondly remembered by those who got to know him during the early years of the city. His obituary ended with a description of his legacy by the Saint Augustine Times-Union:

Captain Vail was known by thousands of people who live along the East Coast, and by many more who came to the state as tourists. He was an interesting storyteller and delighted in being surrounded by a group of friends who would listen to his experiences by the hour.