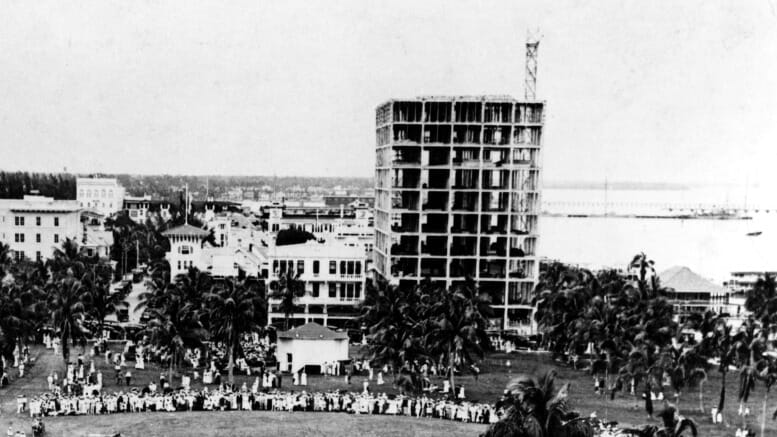 Chamberlain Apartments next to McAllister Hotel in 1918

Nestled between the McAllister Hotel and the Elks Club at 313 East Flagler Street stood the Chamberlain Apartments from 1916 until 1925. The apartment building was constructed by one of Miami’s pioneer photographers, John Chamberlain, who knew that Miami would offer an enterprising individual such as himself great opportunity. However, real estate was not his primary line of work and his investment in the apartment building just augmented the fortune he made in postcards.

When John made the decision to relocate from Massachusetts to the shores of Biscayne Bay, he hoped to be the first to capture the conversion of a wilderness outpost into a city. The timing of his arrival coincided with the onset of clearing the grounds for Henry Flagler’s Royal Palm Hotel. It was Chamberlain who photographed the moment when John Sewell and his men began that work, and it was the same man who continued to shoot the fledgling city during its formative years. Many of these photographs would become some of Miami’s earliest keepsakes in the form of postcards, a business for which Chamberlain was best known. 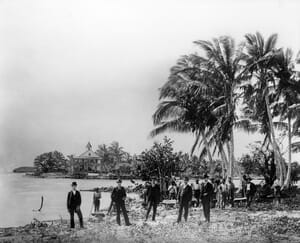 Once word got out that Henry Flagler was going to extend his railway to a new city near the Miami River, people all over the country took notice. When news made it up to Sturbridge, Massachusetts, John Chamberlain, and his wife Ada, arranged to sign a lease for a photography studio in what would become the Royal Palm Casino, which was the facility that housed the pool as well as retail and office space.

However, John would not wait for the annex to be completed before traveling to his future home. He wanted to walk the area and photograph the men working on the creation of the city from a wilderness. Within a day of arriving in March of 1896, he took two photographs of John Sewell and his workers preparing the grounds for the construction of Flagler’s Royal Palm Hotel. The pictures were printed in newspapers throughout the state, as well as other parts of the country, and helped generate excitement for what was happening along the banks of the Miami River.

While many of the early pioneers who traveled to help build Miami were typically young men, John and Ada were 55 and 51 years-old, respectively. South Florida was considered one of the last frontiers when the Chamberlains arrived in 1896, but John’s energy and rigor to document the city’s progress was impressive.

To provide evidence of his thoroughness, John climbed to the top of the newly dedicated two-story Dade County Courthouse in 1904 to take a panoramic photograph of downtown Miami from the building’s cupola. He was 63 years-old at the time, and that type of dedication and effort to capture the perfect picture was what defined Chamberlain. While there were other photographers who documented Miami’s early years, Chamberlain was prolific in his work to photograph the Magic City. 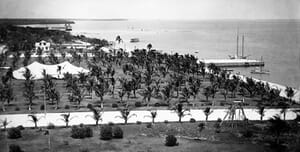 Figure 2: Chamberlain Residence (beyond the white tent), in 1897

Although the Chamberlains maintained a summer home in Oak Bluffs, Massachusetts, they intended Miami to be their permanent home when they purchased a lot near the northwest corner of Twelfth Street and The Boulevard, which would be today’s Flagler Street and Biscayne Boulevard. In 1897, the couple constructed a modest two-story residence which was located near the center of the block bracketed by Avenue A and The Boulevard, which would be today’s NE Third Avenue and Biscayne Boulevard.

In addition to the Chamberlain family home, the block also included several small commercial buildings and a large fig tree on the southeast corner of the block. When plans were announced for the construction of the McAllister Hotel in 1916, which was planned for the northwest corner of today’s Flagler Street and Biscayne Boulevard, James Deering agreed to purchase the tree and relocate it to his property at Vizcaya. He spent $5,000 moving the 40-year-old (estimated) tree from downtown to his property, which would be more than $123,000 in today’s dollars.  The fig tree can live up to 200 years, so Deering believed it was worth the investment.

Around the same time the tree was moved, an article in the Miami Metropolis on April 21, 1916, revealed that John Chamberlain was meeting with an architect to potentially construct an apartment building on the lot where his residence was located, which was in an ideal location directly west of the parcel where the McAllister Hotel was planned and across the street from Royal Palm Park. 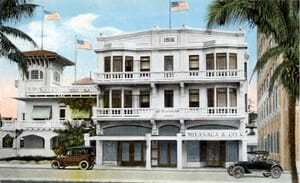 By the summer of 1921, John not only decided to move forward with building his apartment building, but he hired noted architect Edward A Nolan to design the building. Nolan designed some of Miami’s notable structures during the early part of the last century including: Gallat Court Apartments, Johnson Apartments, Hotel Pershing, Hotel Martinique, and the Converse building. The Pershing and Converse buildings still stand today.

The Chamberlain Apartment building was three stories with part of the ground level reserved for a retail tenant. Particularly noteworthy was that John Chamberlain was 75 years of age when he began his venture into real estate to construct his namesake apartment building.  One additional note is that Chamberlain moved his house to the back of the property to allow the apartment building to be constructed on the fifty-foot section fronting Flagler Street. The building was not only fit between the McAllister Hotel and the Elks Club, but it was also tightly fit into the front section of the lot to accommodate the family residence. 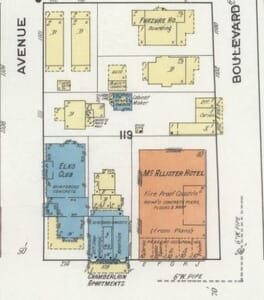 After the first season, the apartment hotel was awarded the gold seal of excellence by the state hotel inspectors, which is the highest rank a facility can be levied and was accorded high praise by guests and residents. It was conveniently located a half block west of the shoreline of Biscayne Bay and across the street from Royal Palm Park, which was an important venue for social activities for early Miamians.

The Miami Metropolis described the interior of each apartment in the building as follows:

“The rooms in the apartment house are particularly well arranged and splendidly furnished. Mr. Chamberlain spared no expense in fitting up the rooms and every convenience is at hand. Each apartment has its own hot water heater, and a completely equipped kitchen. The stoves and the cupboards are large. Each apartment has three closets. The ceilings are high and the windows large, making the rooms light and airy. A huge skylight over the hall and stairway makes this part of the building as light as any.”

The demand to rent apartments was so great and the reviews so good that John considered adding floors and capacity to his building. In a story in the Miami Metropolis on April 10, 1917, it was announced that Chamberlain was considering raising his structure from three to eight stories. However, to accomplish this feat, he would need to enlarge the footprint of the building from a depth of 50 to 140 feet, which would encompass the entirety of his property. This would require that he once again move his house, which was relocated to the back of the lot prior to construction of the existing structure. Ultimately, the additional five stories were never added. 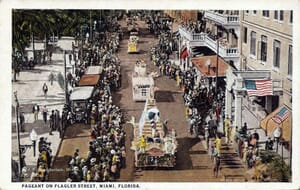 An article in the Miami Herald on January 23, 1921, revealed how big John Chamberlain’s postcard business had gotten since it began in 1896. John had a storeroom in the Chamberlain Apartments which housed his inventory of more than one million postcards at any given time. In addition to the postcards, John also stored thousands of file folders of his photographs, booklets, and panoramic views.

The article stated that visitors to Miami bought 500,000 postcards annually, with many of them sold by Chamberlain and were circulated all over the world. The writer of the article went on to claim that “next to the Chamber of Commerce, Mr. Chamberlain, the postcard king, is said to advertise Miami more extensively than any other single agency.”

When John began his postcard business in 1896 at the Royal Palm Casino, he did his own photography. Over time his business grew to the point where he could employ photographers, provide them with airplanes to obtain the best aerial shots possible and then would convert the photographs into postcards, many of them that were colorized. The article asserted that Chamberlain’s business “wholesales hundreds of thousands of cards every year.”

Lastly, the article stated that “retailers who buy their cards from the postcard king say that the three views which have enjoyed the biggest sale this season (1921) are: The Causeway (now MacArthur Causeway), a splendid aerial photo showing the full three-miles of concrete and stone that spans Biscayne Bay; the Flamingo Hotel; and an aerial view of the James Deering Estate.”

Many of the Chamberlain created postcards are still widely circulated today by memorabilia collectors, eBay auctioneers, and at postcard shows. Imagine having access to the full collection of photographs, postcards, and booklets that at one time sat in a storeroom at the Chamberlain Apartments? 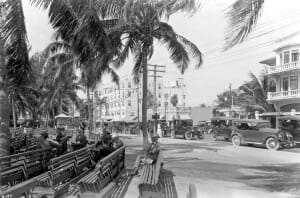 By the spring of 1922, John Chamberlain was mourning the loss of his beloved wife, Ada and was faced with the idea of managing his business interests without her by his side. He was 81 years of age and was considering retirement.

On March 2, 1923, nearly a year after his wife passed away, John sold the Chamberlain Apartments to Abraham Felt, a successful theater and real-estate developer from Philadelphia, Pennsylvania, for $155,000. Felt was very bullish on Miami’s North Bayshore Drive, which was renamed to Biscayne Boulevard in 1926, becoming the most important thoroughfare in Miami.

After acquiring the Chamberlain Apartments and taking a 99-year lease on the Bayshore Drive Yacht Club property in 1923, Felt was interviewed by a reporter when he made the following claim: “the skyline of Bayshore Drive would be close to that of lower New York in the not too distant future.” With all the enthusiasm for the area, Felt and his investors only possessed the Chamberlain Apartment property for a year and a half when they accepted an offer from their neighbor to the east in 1924. 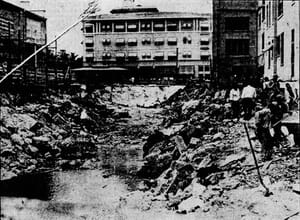 Figure 7: Demolition of Chamberlain Apartments on May 22, 1925

The McAllister Hotel, located on the corner of Flagler Street and Biscayne Boulevard, opened on January 1, 1920 and was in high demand from the moment the first guest checked into the establishment. Every winter season that followed their opening confirmed that their biggest problem was that they did not have enough rooms to rent.

On September 11, 1924, the operators of the hotel began to remedy that problem. They approached Abraham Felt’s investment group, called the Childs Company, and offered $200,000 for the Chamberlain Hotel and lot. The Childs Co. agreed to sell the property and building for a nice profit of $50,000 after only 18 months of ownership, which is worth over $787,120 in today’s dollars.

With the proposed addition that would replace the Chamberlain Apartments, the additional rooms would make the McAllister the largest modern hotel in Miami, giving it total of 550 rooms. As part of the project to add an annex to the hotel, the McAllister also spent $25,000 on remodeling and redecorating the facility.

As part of the remodeling investment, the McAllister added a porch onto the Flagler Street side of the building while also remodeling the ground level store fronts. In addition, the lobby and most of the existing suites were redecorated and modernized.

John Chamberlain lived a very full life even before arriving in Miami in 1896. He made the most of a second act after relocating to South Florida when he took on the role of documenting the birth of a city. As we reflect on Miami’s 125th year since incorporation, the best way to remember John Chamberlain’s contribution to the Magic City is to take note the next time you see a postcard depicting early Miami and see if the copyright reads: “J.N. Chamberlain, Miami, FL”. If it does, you know you have an authentic keepsake from “The Postcard King.”