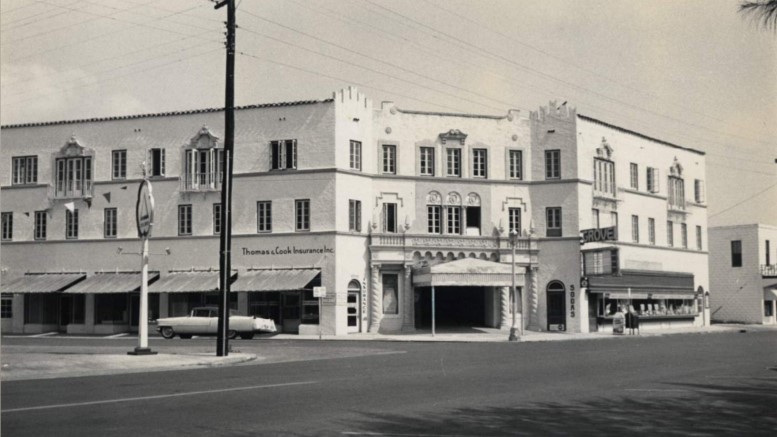 The VIP list of writers who visited or resided in Coconut Grove by the mid-20th century were joined by the “royalty” of the entertainment world who made the village a stop on their circuits.  The roster of musical artists performing in Coconut Grove in the 1960s and 1970s, included Donovan, Joni Mitchell, and Jimmy Buffet.  A favorite venue for them was the Gaslight Inn on Grand Avenue near the community’s center.

Another prominent entertainment venue was the Coconut Grove Playhouse, a converted movie theater, known initially as the Coconut Grove Cinema, which opened in 1927.  After its conversion to a live stage venue in 1956, the new playhouse opened with a presentation of Samuel Beckett’s “Waiting for Godot.”  The playhouse was an instrumental part of the Grove’s hipness and creativity in subsequent decades till its untimely closing in the first decade of the new century. Many of America’s most notable performers over the past five decades, ranging from Tallulah Bankhead to Kathleen Turner, appeared there.

In 1963, the playhouse presented “Irma La Duce”, the Parisian themed comedy centering on a disgraced former police officer falling for a beautiful Parisian prostitute, Irma La Duce. To generate more publicity for the play, theater officials, with a big assist from powerhouse publicist, Charlie Cinnamon, turned the streets surrounding the playhouse into a Left Bank/Parisian setting by creating the Left Banks Arts Festival. Many Grove artists displayed their works in this setting, and tour goers turned out in droves, prompting a reprise of the festival the following year, now parading under the Coconut Grove Arts Festival banner.  Each year since the Festival has drawn artists and visitors from many parts of the region and beyond.  Today it ranks among the nation’s premiere juried arts show. In the meantime, the playhouse awaits a long-delayed reopening that may come with a radical overhaul of the original theater. Coconut Grove has also flourished as the seat of South Florida’s Bohemian life with its coffee houses, boutique art galleries and as a popular gathering place, particularly in Peacock Park, for beatniks and hippies.  Many considered the Grove to be a center of “hipness” along the lines of New York City’s Greenwich Village. By the late 1950s, coffee houses hosted beatniks who sometimes read their latest poetic creations before an audience of like-minded people be it artists, writers, or even weekend hipsters. Hippies came in much larger numbers to the park and elsewhere in the Grove from the mid-1960s into the 1970s.  Their daily and even nightly presence brought young hipsters to the Grove from many areas of South Florida and beyond, but their growing presence vexed many business owners who pushed back against them.

Eccentrics continued to gravitate to the Grove long after the hippie era was over, paving the way for huge, costumed Halloween street parties, the annual Bed Race, and the celebrated King Mango Strut, which began in the early 1980s, and continues to spoof each year at holiday time  those politicians and others whose foibles make for splendid satire.  With its parades, art festival and parties, Coconut Grove remains a celebratory neighborhood. Quirky stores were also a part of the Grove’s charm.  The I Ching store, owned and operated by a hippie family and standing where CocoWalk rests today, featured a bewildering array of Chinese memorabilia, while The Joint, which stood nearby, was a hip, low cost clothing store with its tie-dyed shirts and jeans. Its oversized logo of a marijuana stick, or “joint”, was visible to all who traipsed by its premises.

Across the street from The Joint, at the corner of Main Highway and Fuller Street in the onetime home of the Coconut Grove Bank, stood, in the late 1960s, an experimental laboratory operated by Dr. John Lilly, an associate of Dr. Timothy Leary, the guru of LSD.  Lilly’s “laboratory” featured two tanks containing porpoises, who were experimental subjects in the scientist’s attempt to gauge the impact of noise on their psyches. “Head shops,” with their rolling paper and hash pipes, were also part of the scene. Following the “hippie era,” developmental change was in the air for the Grove. Home to many Coconut Grove “characters,” the modest, wood frame buildings on the ridge overlooking South Bayshore Drive gave way by the 1970s to high rise condominiums.  While the Mayfair in the Grove and CocoWalk, two ambitious malls that opened in that era and beyond, replaced many of the businesses dotting Grand Avenue.  In fact, it was the Grove’s uniqueness—along with its tolerance of a wide array of viewpoints and lifestyles—that catalyzed these changes.

However, changes of another kind directly and adversely impacted the aformentioned shopping initiatives.  By the late 1980s, South Beach’s Art Deco district came alive with a brisk pedestrian life and a rich offering of restaurants and clubs.  In the following years and decades, other long dormant Miami neighborhoods, including Little Havana, Wynwood, and Buena Vista/Design District, also experienced a renaissance, drawing many visitors and shoppers away from Coconut Grove.  By the early 2000s, the once brisk street life unique to Coconut Grove had diminished significantly.  The consequences were severe. CocoWalk is in the throes of an overhaul after experiencing financial difficulty. The long dormant Mayfair in the Grove now hosts offices of large enterprises.

Nearby, the imposing Coconut Grove skyline, which began changing significantly with the opening of a Ritz Carlton complex at the dawn of the new century, now hosts state of the art condominium towers, including the Grove at Grand Bay and Park Grove, designed by two of the Western World’s most prominent architects. Beautiful Regatta Park, resting partly on the footprint of the late, lamented Dinner Key Auditorium, stands between the blue waters of Biscayne Bay and the Terra Group’s Grove at Grand Bay, known affectionately as the “Twisted Sisters” for the curving contours of its two buildings.

Architectonica, a world-renowned architectural firm that began in Coconut Grove more than forty years ago, has moved its offices back to the neighborhood and is heavily involved in its redevelopment. At the foot of historic Charles Avenue, with its rich black Bahamian ambiance, the most prominent home, the Stirrup residence, has undergone a major restoration and will reopen as a bed and breakfast facility.

Yet even as it continues to evolve, Coconut Grove maintains an ambiance, a vibrancy, and a spirit unlike that of any other community in southeast Florida. It will continue to stand apart from other communities in the region for reasons of these characteristics, ensuring that its future will bring more excitement, color, and accomplishments to one of America’s most compelling urban areas.  Here’s to the next 100 years of the Grove!