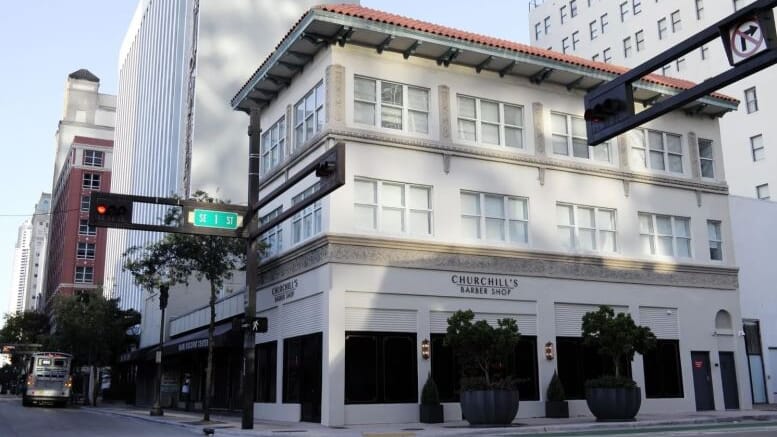 On the northeast corner of SE First Avenue and SE First Street sits a relic of Miami’s building boom of the 1920s. The Converse building was conceived and constructed in the mid-1920s, and it provides a window into the transition of SE First Street from a residential quarter to a prominent commercial sector of early Miami.

The occupant of the lot prior to the Converse building was one of Flagler’s Royal Palm Cottages. The residence that sat on this lot was home for several of Miami’s most prominent pioneer families. The alignment of cottages located on SE First and SE Second Streets provided much needed housing for the employees of the Florida East Coast consortium of companies, and the residence that preceded the Converse was located on the northwestern edge of Royal Palm Cottage row. This is the story of that prominent corner in downtown Miami which provides a glimpse of the Miami of yesteryear. 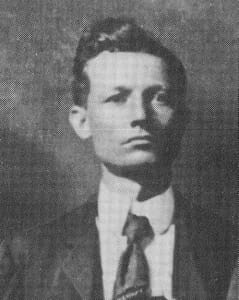 On one of his trips to the City of Miami in 1896, Henry Flagler was made aware of the shortage of housing for the workers who were building his Royal Palm Hotel and operating his railway. Given the scarcity of accommodations in what was a wilderness at the time of Flagler’s visit, many of these laborers were forced to live in tents on any land they could find.

His solution was to finance the construction of four rows of worker cottages along today’s SE First and SE Second Streets, between SE First and SE Second Avenues. There were cottages on both the north and south sections of each street. These residences were referred to as the Flagler’s Royal Palm Cottages, of which only one still stands today in Fort Dallas Park. The residences were simple two-story structures that were either purchased or rented by their occupants. The price was subject to bathroom accommodations, where internal plumbing was rented or sold at a premium. Each residence was painted in Flagler yellow.

The cottage that was erected on the northeast corner of SE First Street and SE First Avenue, then known as Thirteenth Street and Avenue C, was a boarding house operated by a woman named Carrie Johnson. Johnson was one of the first women to be featured in the Miami Metropolis’ Society page when her marriage to Oscar Tucker was announced, a proclamation that created quite a buzz in early Miami. An article in the Miami Metropolis in 1925 reflected on the announcement as follows:

“Serious were the times Miss Carrie Johnson created a social flutter by engaging in the first marriage of sufficient interest to be remembered by most of the city.”

Johnson only operated the rooming house for a couple of years when the Model Land Company, the real estate arm of the FEC organization and owner of the property, sold it to Frank T. Budge for $2,700. Budge was a pioneer retailer who owned Budge’s Hardware, which was located for many years on the northeast corner of Miami Avenue and Flagler Street. A couple of years after purchasing the cottage, Budge sold it for $3,500 to John F. Olive, who would later operate the Miami Club on NE Second Avenue (Avenue B), located just a block east of this property.

The Miami pioneer who owned the residence the longest was James E. Lummus who purchased the property from Olive in 1902 and possessed the home until it was sold in 1924. Having arrived in Miami in 1896, prior to the incorporation of the city, James became the second mayor of Miami and the second person to establish a business in the community when he opened a grocery store in the spring of 1896. The establishment was originally called the J.E. Lummus until it incorporated as the Miami Grocery Company in 1906, two years prior to Lummus selling his interest in 1908. He later became president of the Bank of Bay Biscayne and then founded the Southern Bank & Trust. James, along with his brother John, was also one of the founders of Miami Beach when it incorporated as a town in 1915. His brother John was elected the first mayor of the town of Miami Beach.

The Lummus family lived in the cottage for nineteen years before leasing it out to Dr. A.G. Holmes in 1921. Holmes established his medical office in a building located behind the home, on the northern edge of the property, which fronted on Avenue C (today’s SE First Avenue).

The lot on which this cottage and office was built was considered ideal due to its size, beauty and location. It was described in an article by the Miami Metropolis published at the time Lummus sold the property in 1924:

“This property has a frontage of 55 feet on S.E. First Street and 120 feet on First Avenue. There are a number of the massive oak trees of the primeval jungles still growing in the yard, which makes it a great attraction to visitors in the city.”

The land was acquired by a real estate investor by the name of M.C. Hardee of the firm Hardee & Gentile for a sum of $150,000 in January of 1924. Three months after the sale it became clear what would become of the property. The Royal Palm Cottage that sat on the property for twenty-seven plus years would give way to a new three-story structure which was given the name of the ‘Converse Building’. 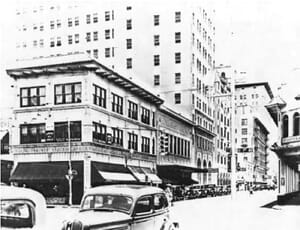 Shortly after acquiring the northeast corner of SE First Avenue and SE First Street, Hardee leased the property to a long-time Miamian named A.C. Converse, who made immediate plans to construct a three-story office building of reinforced concrete and hollow tile construction. Converse hired Edward A. Nolan as the architect to design the building, and C.R. Donathan as the general contractor.

A Miami Herald article on April 22, 1924, described the building as having room for three stores on the ground level, and providing five offices on the second and third stories. The building’s construction cost was estimated at $20,000 and it was expected to be completed by September 1, 1924.

A day later, the Miami Herald reported that construction had begun on the Converse Building. This article provided more detail on the design and building materials used to fabricate the edifice:

“Reinforced concrete will be used for the beams and pilasters, and the curtain walls will be made of hollow tile. The front of the building will be finished in Kaen cement with marble trim, and the upper stories will be decorated with plastic molds and panels.”

The building only took a little more than four months to construct from start to finish. By September 10th, the first tenant, Metropolitan Realty, moved into its new offices in the building which was assigned the address of 101 SE First Street in downtown Miami. Given the demand for labor and building materials in Miami by the mid-1920s, it was an impressive accomplishment that the architect and general contractor were able to complete the project on time.

Tenants Through the Years 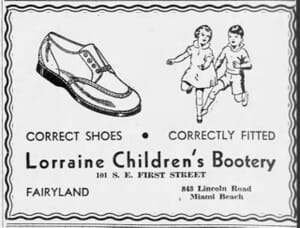 In addition to Metropolitan Realty, the Converse Building became the home to another prominent real estate firm in Miami during the building boom of the 1920s. Schilling Properties, headed by M.D. Morse, specialized in selling property in the new city of Hialeah, out of the Converse Building. Morse got his start in real estate working with George Merrick and selling property in Coral Gables before he decided to branch out on his own and focus his attention on Hialeah.

The tenant that had the longest stay in the Converse Building was Lorraine Children’s Bootery, who operated their store on the ground level of the edifice. This establishment was one of the first to move into the building in 1924 and remained opened for business at 101 SE First Street until 1950. They weathered the difficulties of the Great Depression, and even opened a second location in Coral Gables in 1948. Lorraine Children’s Bootery was founded by two Miami-born sisters, Florence and Sara Dorothy, the same year that they opened for business in the Converse Building and remained there for more than twenty-five years.

Other notable tenants in the building included a physician, Dr. Edgar Peters, Irene Hat Shop, and Florida East Coast Growers and Shipper’s Association. On March 8, 1931, the building was sold to an investment firm for $55,000. Seven years later, in June of 1938, the building was leased to Joseph H. Cohen for an annual rent of $4,000. Despite being in the throes of the Great Depression, the building was completely leased during this time. 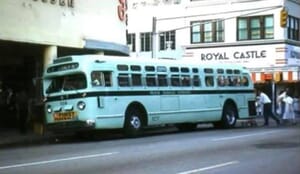 Royal Castle was founded in Miami by William Singer in 1938. Although this downtown location was not its first, it opened at a time when the company was growing rapidly and it was one of the chain’s first twenty-five restaurants. Royal Castle grew to 175 locations at its peak, with the bulk of them located in South Florida.

The restaurant at 101 SE First Street flourished in the 1950s and was still operating out of the Converse Building into the 1970s. The last advertisement placed in Miami newspapers for this location was in 1973, which could be evidence that it closed around this time. 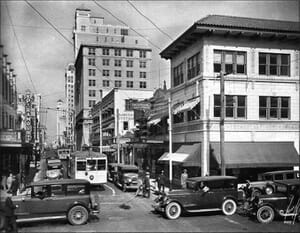 For about ten years, beginning in the late 1980s, the primary tenant in the Converse Building was a camera store called Save-On Electronics. During the decade of the 2010s, Trial Copy Legal Document Services occupied the building while providing litigation preparedness services for the legal industry.

The building is now occupied by a familiar business in downtown Miami. Churchill’s Barbershop had operated out of the Watson Building, a block west of the Converse Building, since 2005 and recently moved to its new location at 101 SE First Street in 2020. Maybe one day the barbershop will surpass Lorraine’s as the tenant with the longest tenure in the Converse Building? We will have to check back in 2046 to determine if Churchill’s reaches that milestone.