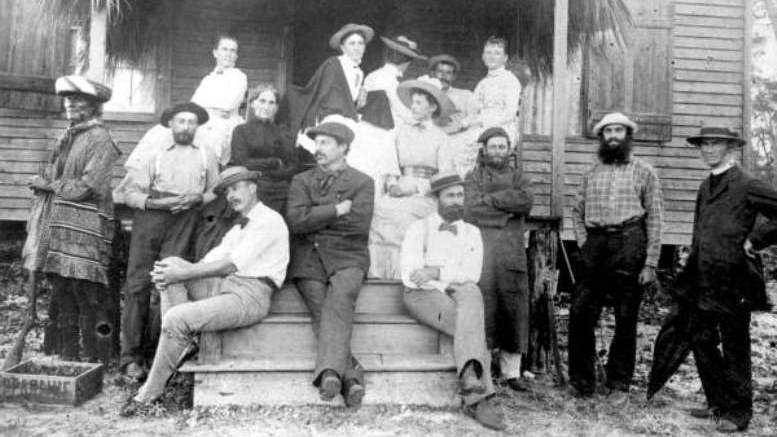 We’ve noted in the previous blog that a vast wilderness with small clusters of hardy settlers living along Biscayne Bay was the greater Miami of just 125 years ago. Further, we observed that Coconut Grove, one of those communities, was also the area’s most dynamic, progressive, and independent-minded settlement.

The Grove’s natural setting is unrivaled as it looks out from behind lush subtropical foliage toward the turquoise waters of Biscayne Bay.  The province of Tequesta Indians for millennia, the Grove’s modern incarnation begins in the nineteenth century, when it became a favorite stop for mariners attracted to the bubbling fresh water springs on its waterfront.  After the Cape Florida Lighthouse opened in 1825, light keepers and their assistants became frequent visitors to Coconut Grove, as were wreckers or salvagers of disabled ships along the nearby Great Florida Reef.  In fact, an early, unofficial name of the area was “The Land Across from the Light.”

By the middle years of the nineteenth century, Edmund (“Ned”) and Ann Beasley, the Grove’s first known permanent residents, lived along its bay front in the area around today’s Barnacle State Park.  When Ned died, Ann rented a portion of their property to Dr. Horace Porter, a onetime Union surgeon in the American Civil War.  Porter applied for—and was granted– a U.S. Post Office for the area in 1873, calling it Cocoanut Grove (sic) after viewing a couple of nearby Coconut Palm trees!  Soon after, he left the area following a failed attempt to swindle the widow Beasley of her property, and the post office was quickly forgotten. Lured by the prospect of free land through federal homestead laws, other settlers, in the 1870s, settled in the region.  Most important of those in Coconut Grove were the Pent and Frow families, who hailed from the Bahamas, as well as “Jolly” Jack Peacock, a British settler who was also keeper of the House of Refuge for shipwrecked mariners on today’s Miami Beach. Indeed, the settlement was called “Jack’s Bight” by some in recognition of both Peacock and its curved shoreline.

In the 1870s, Jack Peacock convinced his brother Charles and his family to leave England for the wilds of southeast Florida.  At about the same time, Ralph Munroe, an accomplished sailboat designer from Staten Island, came to Miami on a sailing vacation.  Munroe met the Peacocks, with whom he became friends, and he suggested that they open a guest house in the area for its ever-growing number of visitors. The Peacocks opened the Bay View Inn, a simple wood frame structure, in 1882, in today’s Peacock Park.  It was the first “hotel” in the area.  Some of the Inn’s early staffers were black Bahamians who created their own settlement along Charles Avenue. In the late 1880s, Ralph Munroe discovered Porter’s post office from a postal map at the Fowey Rocks Lighthouse.  When he informed his neighbors of this discovery, the post office was reopened and Coconut Grove acquire its enduring name and bore its spelling from the Porter era. In the meantime, the number of people visiting the Bay View House grew to include a motley collection of eccentrics and creative types, including titled counts, writers, early environmentalists, and even the son of Harriett Beecher Stowe.  Many less notable Coconut Grove residents labored as farmers in areas of the Grove west of the settled bay front region.

Soon the Peacocks had enlarged their facility to accommodate the increased number of visitors and renamed it the Peacock Inn.  It served as the community center. Enthralled with the natural splendors of Coconut Grove, many of its visitors decided to build homes in the area. By 1900, the community claimed more than one hundred residents ranking it among the largest settlements on the southeast Florida mainland.

By then, those institutions associated with maturing communities began to appear.  The Biscayne Bay Yacht Club opened in 1887 following a Washington Birthday sailing regatta.  In the same year, Isabella Peacock began conducting Sunday school classes in a building constructed for that purpose.  In 1889, the structure hosted the first public school in the county.  The Sunday school, moreover, helped spawn the first church, today’s Plymouth congregational Church, where blacks and whites, for a time, worshipped together. Flora McFarlane, the first woman homesteader and school teacher in the area, founded the Housekeeper’s Club (today’s Woman’s Club of Coconut Grove) in 1891 with the goal of “community uplift,” which it achieved through fundraisers that paid for amenities in the community.  The fame of the Housekeeper’s Club spread quickly.  Within one year of its inception, Harper’s Magazine, a major national publication, profiled the club.  The Pine Needles Club, consisting of the young women of the community, was organized in 1895.  It members established the first library.

In our next blog, we will examine the development of Coconut Grove in subsequent years and decades.