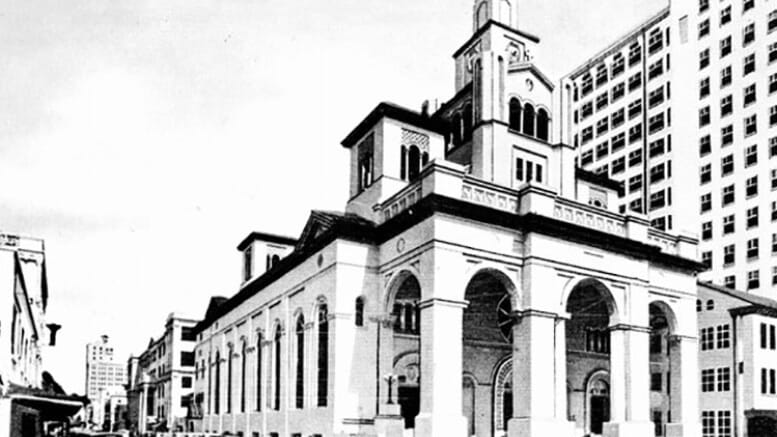 In the first installment of this history of Miami’s Gesu Catholic Church, we noted that the first Masses celebrated in Miami at the time of its incorporation in 1896 were in the home of Joseph A. McDonald and John B. Reilly, two of the new city’s most prominent citizens, with the former responsible for engineering Miami’s municipal incorporation drive, and the latter serving as its first mayor.

Events now moved quickly toward the establishment of a Catholic church in the neophyte city. A congregation was quickly formed while Masses continued to be celebrated in the McDonald home. Later in Miami’s birth year, Henry M. Flagler, a Presbyterian, and one of Miami’s founders, donated nine lots in downtown Miami for a Catholic parish.

Church of the Holy Name 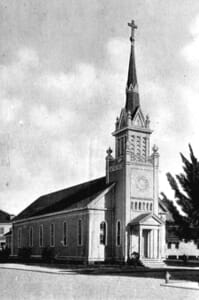 Figure 1: Church of the Holy Name

In 1897, the congregation broke ground for a simple wood frame church highlighted by a steeple on its southern flank. The church covered five lots from the Flagler donation. Originally called the Church of the Holy Name, the parish held its first services in its new facility, which abutted today’s N.E. First Avenue in the west and Second Street on the north, on June 6, 1897. A large congregation filled the building for that first Mass, which was celebrated at 9:00 AM.

The city and the church grew quickly in the early 1900s, with St. Catherine’s Convent School added in 1904.  Standing immediately east of the church and the rectory, the school was staffed by the Sisters of Saint Joseph, an order founded in Le Puy, France, in the late nineteenth century, and one that would become familiar to students of Catholic grade schools in greater Miami, since these nuns, almost exclusively Irish by then, staffed many of these institutions throughout the 20th century. In 1926, St. Catherine’s was replaced by the Gesu School, located near the old school’s footprint. 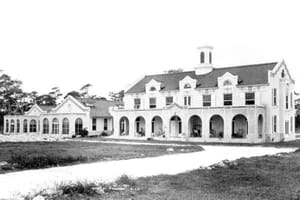 Another proud institution that the Church of the Holy Name helped spawn and develop was the Friendly Society Hospital, a charitable institution, which also represented the young city’s first permanent hospital when it opened in 1909.  This development arose primarily through the efforts of Father A.B. Friend, S.J., the parish’s pastor, who gave his name to the first portion of the institution’s title, “Friendly.”  Out of the Friendly Society Hospital, or the Friendly Hospital, as most called it, would arise the City Hospital in 1916, which was located a mile northwest of downtown. It was later renamed Jackson Memorial Hospital in honor of Dr. James Jackson, Miami’s pioneer physician.

Miami grew quickly in the second decade of the twentieth century, as did the size of the congregation of the Church of the Holy Name, which now had many of the societies and clubs common to Roman Catholicism. The parish claimed a Knights of Columbus, comprised of its leading male parishioners, as well as the Daughters of Isabella, who, like the Knights, were active in civic as well as spiritual affairs. By the early 1920s, on a typical wintertime Sunday, more than 15,000 residents and visitors attended Mass. 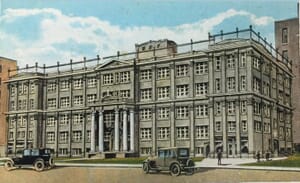 The necessity for a new, larger church was apparent in the century’s second decade leading to a successful fundraising drive for the project. Finally, the congregation broke ground for a magnificent Mediterranean-style Church on the site of the original church in the early 1920s. In December 1922, a parade, headed by the Knights of Columbus and including the Daughters of Isabella and many other church groups, moved through the streets of downtown Miami for the laying of the cornerstone.  Bishop Patrick Barry journeyed from the Diocese seat in St. Augustine for that auspicious occasion. Two years later, the large, impressive structure, with seating for more than 1,100 worshippers opened.  Among the building’s many splendid features were its stunning stain glass windows, created by Franz Meyer in Munich, Germany, as well as its triumphal arch high above the altar, and tall portico at its entrance.

In 1926, a new rectory and school opened immediately behind, or east of, the church.  The handsome facility with neo-Classical elements at its entrance provided a sound education and direction for students from grades one through twelve until the high school was removed in 1953.  Gesu School was a leader in academics and sports throughout its lifetime. 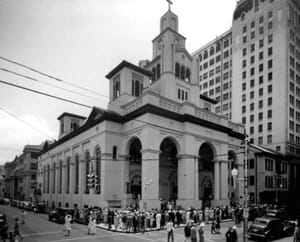 In the era of the Great Depression of the 1930s, Gesu parishioners responded to the community’s most pressing needs by founding Catholic Charities. During World War II (1941-1945), Gesu welcomed many thousands of military men and women to the Gesu Servicemen’s Club for dances in the parish hall and athletic events on the school’s roof garden.  Not surprisingly, many service personnel who trained in the Miami area chose to make South Florida their home after the conflict.  In 1945, 322 couples exchanged marriage vows in Gesu Church.

In the late 1950s and 1960s, Gesu School hosted Centro Hispano Catolico, which assisted the growing Puerto Rican population in the Wynwood and Riverside neighborhoods, as well as the first waves of Cubans fleeing the tyranny of Fidel Castro. Statistics compiled for the years 1960 through 1962 indicate that Centro Hispano provided medical and dental care, childcare, legal aid, employment services, food, clothing, and cash to more than 250,000 Cuban refugees.

Gesu also reached out to the small African American community of Catholics in nearby Colored Town, today’s Overtown, establishing a mission church there in 1922, before opening St. Francis Xavier parish in a converted store in the heart of the community in 1929. In 1938, in another part of Colored Town, Bishop Patrick Barry of the Diocese of St. Augustine dedicated St. Francis Xavier’s new Spanish Mission style church, which Gesu clerics staffed until the late 1960s, when it received its own clerical leadership.   By then, St. Francis Xavier also operated a school for children of the parish.

Gesu’s halcyon days included the war years of the early 1940s through the mid-1950s. The church offered Masses throughout the morning and afternoon each Sunday with thousands of worshippers on hand for these sacred celebrations. Midnight Mass on Christmas Eve, long a draw for the faithful, filled the church, sometimes necessitating a 12:15 A.M. Mass for the spillover in the lower church at the basement level.

A cloud, however, loomed on the horizon in the 1940s, when the Diocese of St. Augustine decided to eliminate high schools as part of parish schools in favor of standalone secondary institutions.  Gesu High School closed after the graduation of the Class of ’53.  A vibrant part of the parish had disappeared. In 1982, the rest of the school, containing grades 1-8, closed, and this once elegant building suffered the ignominy of demolition just a few years later.

The church entered an uncertain period due to the changing landscape of downtown Miami. There was a greater need for surface parking for shoppers and to support the opening of the downtown campus of Dade County Junior College, which led to the demolition of many homes and residential buildings, which left a dearth of downtown residents. There was talk that it would be closed. 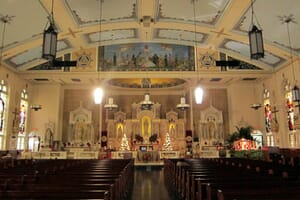 However, the congregation experienced a turn-around in the 1990s, helped by enlightened priestly leadership, the Centennial celebration for both Gesu and the city of Miami in 1996, and “sprouts” of new life downtown with the flourishing Wolfson Campus of Miami Dade Community College  across from it. In addition, the busy Port of Miami provided many visitors coming and going on the great cruise ships, while the active advocacy for that sector by the Downtown Development Authority led to an increase in the interest and viability of the city’s central district.

In subsequent years, massive downtown residential building projects, resulting from two real estate booms, brought thousands of new residents to that sector and into the surrounding neighborhoods. This demographic trend resulted in many new congregants for the venerable church, which has remained under the direction of the peerless Jesuits.

In just four years from the publication date of this article, the historic building housing Gesu Catholic Church will celebrate its centennial, while the parish will be just one year away from its one hundred-twenty-fifth anniversary. Here’s to the next century in the life of the oldest institution on its original site in Greater Miami, and to the selfless assistance, spiritual, material, and otherwise, that its priests, brothers, nuns, and lay members have provided the hordes of persons who have looked to it for spiritual and temporal uplift.  For the present, the church continues to serve the faithful who flock to Gesu throughout the day, every day of the year.