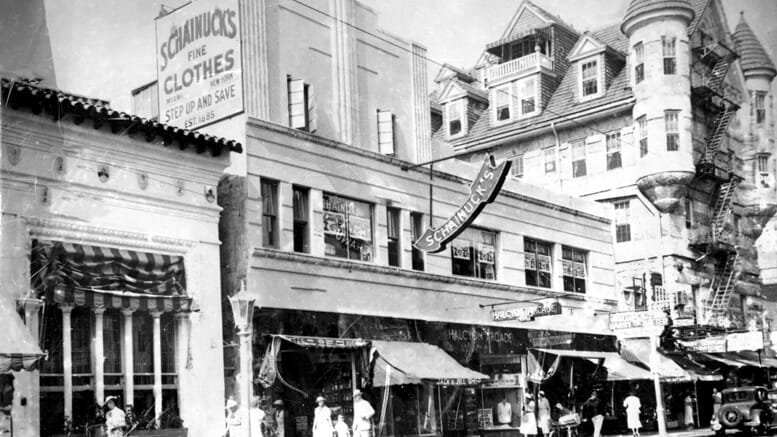 The cover photo for this article is a street level view of the Halcyon Arcade #4 from Flagler Street in 1935. During the period that Thomas Peters owned the hotel and land around it (1914-1921), he built several arcades to provide more retail and dining options for hotel guests. The picture was taken just two years prior to the arcade and hotel being razed to make room for the Alfred I. Dupont building in 1937. 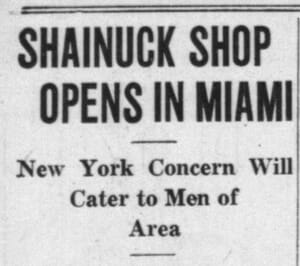 Florida National Bank purchased the hotel and arcades in July of 1933. After the acquisition of the property, the bank moved their offices and opened a branch in the arcade on Flagler Street. Given the size of the acquired property, the bank had plenty of retail space for other organizations. One of the tenants prominently featured in the photo was a company from New York that opened their first store in Miami in December of 1934.

Shainuck & Sons was established in Wilkes-Barre, Pennsylvania by Louis Shainuck in 1885. Louis had passed the company to his son, Jonas, who later moved the men’s clothier and store to New York City. Jonas was ambitious and followed a plan to grow the retail business into a national chain.

At the time the Miami location opened, Shainuck’s was operating twenty-three stores in the eastern part of the United States. Miami was their first southern location and the principals were beaming with optimism that this would be one of their more successful shops.

David Shainuck, treasurer of the company and Jonas’ brother, traveled to Miami for the opening in December of 1934. His remarks to the media were as follows:

We have been greatly impressed with the possibilities for our business in Miami because of the fact that general business and construction activity, as well as, travel into southern Florida is on the upward trend. We have every confidence in this city’s future growth and believe there is an unprecedented opportunity here. 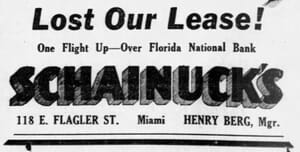 Miami had shown signs of coming out of the Great Depression sooner than other cities in America. Although those signs were just beginning in 1934, it wasn’t until a few years later that Miami began a significant improvement in construction, business and tourist activity.

Despite the optimism of the Shainuck organization, circumstances changed dramatically just a couple years after they signed a lease for their Flagler Street location. The principals of the Florida National Bank decided to build a newer and larger building that would replace the Halcyon Hall Hotel and arcades. In May of 1936, the retailer announced that they had just lost their lease and needed to liquidate their inventory. Everything was on sale. 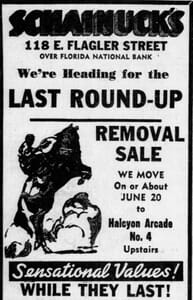 An advertisement in the Miami News on June 12, 1936, announced that their last day in the Halcyon Arcade would be June 20th. It stated that they were moving locations but did not say where in the ad. Before the Miami store could celebrate its second year in downtown Miami, Shaincuks was forced to move out of their Flagler Street location.

Demolition of the hotel and arcades began in 1937 and construction of the Alfred I. Dupont building was completed in 1939. It will celebrate eighty years since its opening this year (2019).

The formal opening of the building took place on October 23, 1939 and included martial music, flowers, visiting dignitaries as well as state, county and city officials. On its fiftieth birthday in 1989, it was listed on the National Register of Historic Places. Just four years later was given local historic designation and is considered one of the most important buildings on Flagler Street in downtown Miami.

Where Shainuck’s once stood is roughly where Lost Boy bar is in the Dupont Building today. Given the growth of population in downtown Miami and the need for good entertainment options, Lost Boy will certainly enjoy a much longer tenure on that spot than Shainuck’s experienced in the mid-1930s. 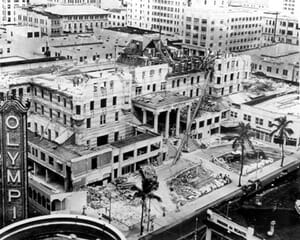 Figure 4: Demolition of Halcyon Hall Hotel and Arcades in 1937.