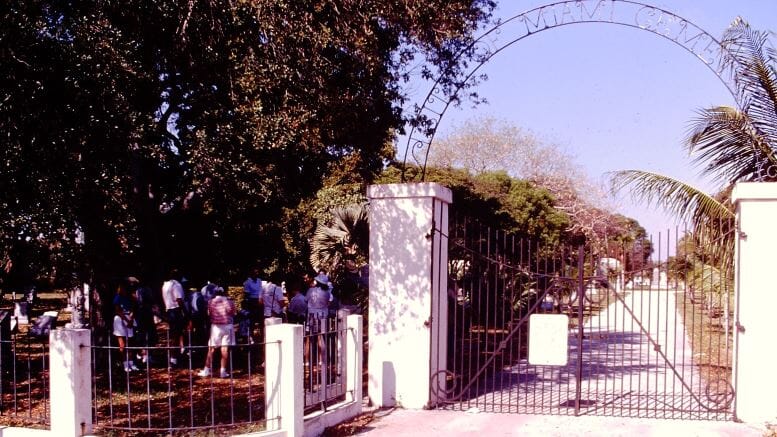 As a native Miamian, my introduction to the historic Miami City Cemetery came “late” in life for me.  It was the mid-1970s, and I had returned to Miami, temporarily, after completing my Ph.D. in history at Florida State University. I joined a couple of life-long buddies for my first visit to the Chanticleer Bar, which was later renamed to Tobacco Road, on an overcast August Sunday afternoon which led to my first visit to the cemetery. 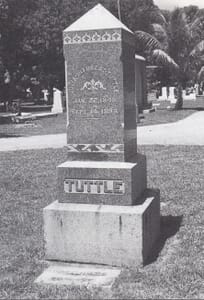 Although I had written my dissertation on elements of Miami history– specifically, its criminal justice system in its first generation of corporate existence–I had little awareness of the old graveyard.  I found it intoxicating to roam through a space hosting the remains of so many early Miami dignitaries including: the mother of Miami, Julia Tuttle, pioneer physician Dr. James M. Jackson, the first mayor John Reilly along with so many other interesting people who shaped the early history of the Magic City.

By the mid-1980s, I was conducting public and private history tours throughout South Florida.  I was mesmerized by a venue that conjured, for me, the earliest history of corporate Miami.  By the beginning of the 21st century, I had buried both of my beloved parents there. Around the same time, I was also conducting Halloween tours (or tours close to that day) in the darkness of night. (A disclaimer: I was born on Halloween!).  Often the number of attendees to these tours has exceeded one hundred. I continue to provide tours of the cemetery, and visit it periodically to “say hello” to my parents.

At 121 years of age, the Miami City Cemetery is one of the city’s most cherished landmarks. It was founded in 1897, just a year following the incorporation of a city that adopted the moniker of the “Magic City”. Miami arose almost magically from the wilderness in 1896, following the arrival of Henry Flagler’s Florida East Coast Railway in April. A Gilded Age prince whose fortune emanated primarily from his vast holdings in the Standard Oil Company, of whom he was a founding partner, Flagler launched a second career as a railroad, resort, and community builder after moving to St. Augustine in the 1880s. 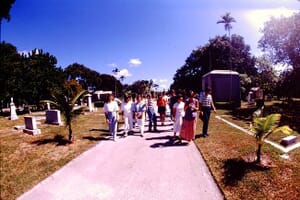 Figure 2: Tour of cemetery conducted by Dr. Paul George in 1988.

Encouraged by the Flagler organization to pursue incorporation, Miami officially became a city of approximately 700 residents on July 28, 1896.  Soon after, the Miami Metropolis, the city’s lone newspaper, called for a municipal cemetery as a proper resting place for its decedents. Despite additional clamoring by the Metropolis, the city did not provide the funding for this undertaking until June 1897, when its board of aldermen appropriated $750.00 for the purchase of a ten and one-half acre tract of pineland from Mary Brickell, matriarch of a land-rich Miami family.  The property stood about seven blocks north of the boundaries of the nascent city.  Soon after the purchase, A.L. Knowlton, who had surveyed the future City of Miami for the Flagler organization in the previous year, undertook a survey of this tract.

Quickly, the graveyard began to take shape. An east-west road, called Central Avenue, bifurcated the cemetery, dividing it into northern and southern halves. The platting of the cemetery included the separation of whites and blacks based on segregation policies in the south during this time. The white section spanned nearly three-quarters of the cemetery while the black section occupied its western quarter.

Burial plots in the early years sold for ten and fifteen dollars depending on their location in the cemetery.  Burials proceeded in the Mitford style, which calls for one body in a plot to be stacked on top of another. By the middle decades of the last century, the city ceased selling gravesites partly because most were already taken.  Today, a person or family coveting a plot could acquire one only through its purchase from someone who owned such property. 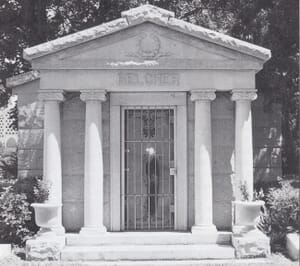 Initially, the city cemetery was bereft of vegetation other than pine trees.  Accordingly, concerned Miamians organized a cemetery association in the early 1900s to enhance its appearance.  The city installed a windmill to provide water for nourishment of the trees and plants that began arising in the graveyard.  A significant improvement in the physical beauty of the cemetery came with the employment of Alex Korsakoff, who held a doctorate in science, as sexton in the 1920s.  Known as the “Mad Russian,” Korsakoff was a self-taught authority on trees and plants, and he, and Dr. David Fairchild, a world-renowned horticulturalist who headed a plant laboratory on Brickell Avenue, were responsible for the planting of a vast variety of trees and plants.

By the middle decades of the 20th century, the cemetery had become a beautiful subtropical garden. Its beauty increased as the decades unfolded and as its foliage grew both in size and number.  The fury of Hurricane Andrew in 1992, however, toppled several of its tallest and grandest trees, marring its beauty.  By 2005, new plantings had restored much of its grandeur, but Hurricane Wilma, which struck in October of that year, caused even more destruction to its greenery than the fabled Hurricane Andrew.  In September 2017, Hurricane Irma brought significant damage to the plants and trees in the old graveyard.

The neighborhoods surrounding the cemetery began developing in the early 1900s, as the city’s population increased threefold in the first decade of the 20th century, and at an even faster clip in subsequent decades. The neighborhood immediately to the east was called Miramar, derived from the Miramar Amended subdivision, contained some of the city’s most beautiful residences.

To the north of the cemetery was the neo-classical styled Miramar Elementary School. It stood until the end of the 1900s. Directly to the east of the old school is the imposing Temple Israel synagogue which traces its history to the early 1920s. 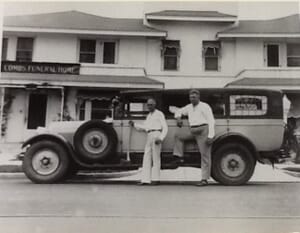 Combs Funeral Home sat three blocks to the south of the eastern entrance to the cemetery. Combs prepared funeral arrangements for many of the bodies interred there. In 1906, Walter Combs purchased the oldest funeral service which was founded by pioneer Edwin Nelson in 1896. After operating out of a storefront from 1906 – 1910, Combs built Miami’s first residential-style funeral home directly to the west of Gesu Catholic Church in 1911. The funeral home moved to the NE Second Avenue location in 1922 to ensure services were conducted closer to the final resting place for the departed.

In our next installment of this blog, we will examine other elements of the cemetery while bringing its story to the present.