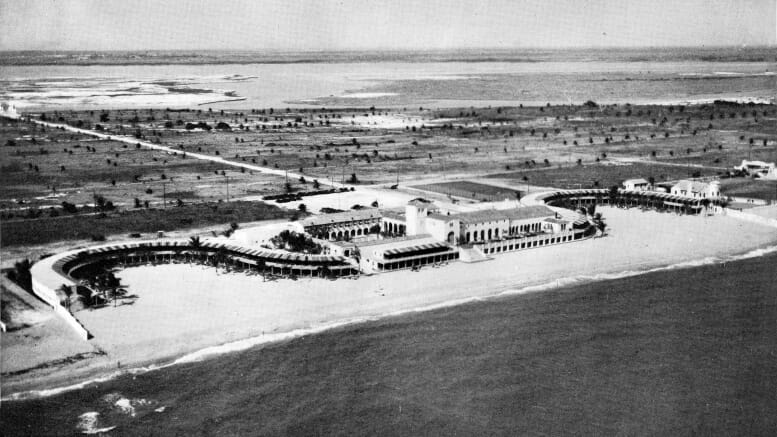 For Greater Miami and other parts of Florida, the stock market crash of October 1929 only deepened an economic downturn that followed the collapse of the real estate boom of the mid-1920s.  Those economic conditions, however, did not deter the opening of the posh Mediterranean-styled Surf Club on December 31, 1930. 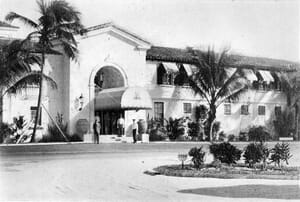 The origins of the Surf Club are often attributed to the frustration of many prominent wintertime residents of Greater Miami over their inability to gain admission to Miami Beach’s Bath Club, which had reached its membership limits by the late 1920s. Other sources argue that these same founders wanted a club less staid and more lively than the Bath Club. One account even has James Cox, the powerful newspaper publisher of the Miami Daily News and a past nominee for president by the Democrat party in 1920, as the catalyst for the club’s creation after learning about the rejection of the bid of Alfred Ochs, a Jewish publisher and friend of Cox, for membership in the Bath Club.

No matter the cause, by the end of the 1920s, a consortium comprised of wealthy visitors invested $300,000 to purchase nine hundred feed of Atlantic beachfront, beginning at 90th Street and extending northward, to construct a club. Designed by Russell Pancoast, a member of a pioneering Miami Beach family and one of the most prolific Beach architects in the first half of the twentieth century, this Mediterranean-styled jewel, sitting amid six acres, featured an elongated two-story building bracketed by Collins Avenue on one side, where the front entrance was situated, and beachfront on the other. As noted, it opened at a time of growing economic uncertainty. 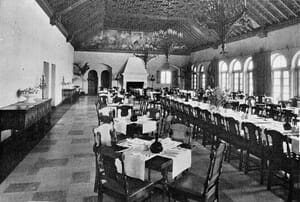 At the time of its opening, the club’s guiding light was Alfred Barton, a former set designer for movie mogul Cecil B. DeMille, who served as the club’s manager for many decades. Soon after its inception, the Surf Club was hosting high profile guests ranging from Hollywood starlets, famed entertainers, and prominent industrialists, all of whom cherished the privacy afforded them within its walls.

In addition to the parties, the club offered an assortment of entertainment options including extravagant musicals and balls, games such as bingo and bridge, elaborate luncheons with poolside fashion shows and an assortment of other high-profile soirees hosted by the club. The array of prominent guests of the Surf Club continued through the late stages of the twentieth century, including Elizabeth Taylor, Cassius Clay, Frank Sinatra, Sir Winston Churchill, and the Shah of Iran. As one member swooned in 1962, “When I die, I don’t want to go to heaven.  I want to go to the Surf Club.”

Before there was the town of Surfside, there was a narrow strip of land wedged between the waters of Biscayne Bay and the Atlantic Ocean.  Archaeological evidence points to the presence of a Tequesta Indian village, including a burial mound, in that immediate area. Named by Juan Ponce de Leon, who visited south Florida in 1513, the Tequestas were Miami’s earliest settlers, their presence in the area reaching back thousands of years.

As the first significant archaeological activity in the Miami area, the archaeological find in today’s Surfside came in 1923 as land was being cleared for the Altos del Mar development.  Another archaeological dig in 1933-1934 led to the uncovering of a habitation mound nearly 400 feet in length. “The Mound,” as it was known, contained the remains of fifty Tequesta natives, potsherds, arrowheads, and other artifacts. A subsequent dig unearthed additional Tequesta artifacts.

Altos Del Mar was the ambitious project of the four Tatum brothers, who were among early Greater Miami’s most prominent developers, and who had platted, from 1923 to 1925, numerous subdivisions within this development which spread in a northeasterly direction through today’s Surfside to the beachfront. The town of Surfside is carved from Altos Del Mar, plats 4, 5, and 6, stretching from the Atlantic Ocean to the Indian Creek waterway, between 87th and 96th Streets. These borders include one mile of pristine beach.

Figure 4: Incorporation of Surfside in 1935

When in 1935, the city of Miami Beach evinced its desire to annex the above area, thirty-five residents of the affected area, all members of the Surf Club, joined together and officially incorporated the town of Surfside on May 18.  These signatories to the charter of incorporation financed the venture with a loan for more than $28,000.  The new town consisted of about 50 residents with little development within its one square mile borders.

Spearman Lewis, Surfside’s first mayor, created a vision for his town as a vibrant beachside development, but its major growth would have to wait until the period following World War II. As the young town developed in the flush of postwar prosperity, it generally followed the plan set by the Tatum Brothers, calling for a business district on Harding Avenue, which runs parallel to and immediately west of Collins Avenue, from 94th to 96th Streets. As it developed, the lines of demarcation between commercial and residential buildings became clear, with the area south of 95th Street and west of Harding Avenue, to the town limits at 87th Street, serving as the residential base of Surfside.

Until recent times, the strip of Collins Avenue falling within the corporate limits of Surfside has been graced with small apartment complexes and beachside hotels and motels. Overall, the mix of residential buildings includes single family homes, duplexes, apartment buildings and condominiums.

In the second and final installment of the history of the town of Surfside, we will look at the town’s more recent past as well as the dynamic transformation of the community over the last couple of decades. The growth of the town has led to a number of posh, new residential resort facilities that were designed by starchitects, or prominent architects, in recent years.

History of the Town of Surfside – Part 2 of 2