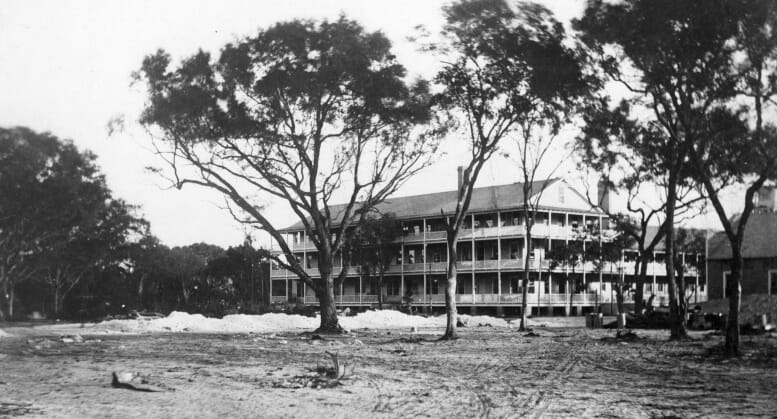 In early 1896, Julia Tuttle and her son, Harry, were intent on opening the first hotel in what would become the city of Miami on July 28, 1896. The mother and son duo decided to expand a building that was located on their property, on the east side of Avenue D, or South Miami Avenue as we know it today, just south of the railroad spur, to become what they would name ‘Hotel Miami’.

To earn the distinction as the city’s first hostelry, the Tuttles would need to finish Hotel Miami prior to the opening of Henry Flagler’s Royal Palm Hotel. They had a head start on Flagler’s hotel because groundbreaking for the Royal Palm did not occur until March of 1896. However, given their lack of experience in projects of this magnitude, the Tuttles under estimated the complexity of constructing a grand hotel. From the onset, there were plenty of unanticipated delays and the project proceeded at a slow pace. 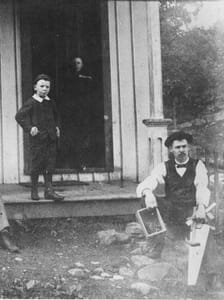 When a hotelier from Palatka, Florida arrived in the summer of 1896, the Tuttle’s dream of opening the first land-based hotel had ended. Salem Graham leased a warehouse from the Brickells on the southside of the Miami River, what we now refer to as Brickell Point, converted it into an inn that became the Graham Hotel officially becoming Miami’s first land-based hostel. There was already a floating hotel operated by Captain Vail which was docked on the river at the termination point of Avenue D, or South Miami Avenue, that began accepting guests in March of 1896.  Therefore, Graham’s inn was not the first official hotel to open in Miami, but it was the first completed land-based inn to accept guests in the city.

Although the inn was far from complete, Hotel Miami did accept boarders into the facility as early as March of 1896. In his account of early Miami, John Sewell described staying in a partially finished Hotel Miami that did not have a door or any semblance of an overhead ceiling. The room had two windows, one nailed up with a pair of wooden blinds. Sewell went on to describe the amenities which included two cots, one water bucket, one tin wash basin, one tin slop bucket, one kerosene lamp, and no chairs. However, Sewell was generous in his review when he said that the lack of a ceiling provided good ventilation.

When Dr. James Jackson and his wife stayed at Hotel Miami in April of 1896, the couple was surprised to have to use a ladder to get to their second story room. The staircase had not been completed yet. Also, there was no affixed door to their room, so the couple had to prop an unattached door up to the opening to ensure privacy. At the time, most of the guests in the unfinished Hotel Miami were single men who came to the area looking to help build the city. 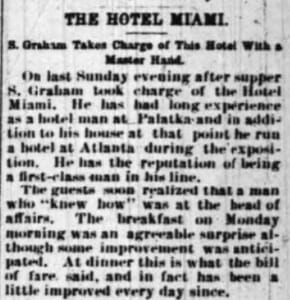 By July, Salem Graham had been operating his inn on the southside of the river with limited success. Part of the explanation for this was that the only option to get from north of the river to the southside was to pay a toll for boat service, operated by the Brickells, to be taxied across the stream. Most of the workers who needed hotel accommodations worked on the north side of the river, therefore, would have to pay the toll to just to get to their hotel and back. Many of them opted to camp on the northside rather than pay the toll to go back and forth from the Graham Hotel.

It was around this time that the Tuttles realized that they needed help not only completing their hotel, but also operating it. On July 10, 1896, they hired Salem Graham to take over the management and oversee the completion of Hotel Miami. The Miami Metropolis described the change in direction for the hotel as follows:

“On last Sunday evening after supper S. Graham took charge of the Hotel Miami. He has had long experience as a hotel man at Palatka and in addition to his house at that point he ran a hotel at Atlanta during the exposition. He has the reputation of being a first-class man in his line. The guests soon realized that a man who ‘knew how’ was at the head of affairs.” 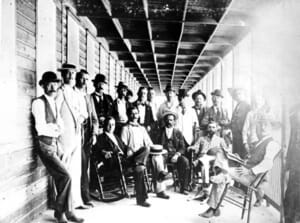 The writer for the Metropolis was insinuating that, prior to this move, the guests of the partially finished hotel were not happy with their accommodations. The change in management to Salem Graham was not only needed for improvements in the day-to-day operations, but also to get the never-ending project completed.

It took the rest of 1896 to finish the work needed to complete the hotel that finally opened on January 22, 1897, which was six days later than the official opening of the Royal Palm Hotel. While the inn’s building became the first location for several of Miami’s pioneer businesses, such as the Red Cross Pharmacy and the Sewell Brother’s Shoe Store, and was considered a respectable alternative lodging option to Flagler’s luxurious Royal Palm Hotel, Hotel Miami experienced a short life on Avenue D when it burned to the ground on November 12, 1899.